I made some progress on this project. I did the hard part - wiring and cutting.

Now I need to decide where to connect the wires. Ideas please!

Do I use an open fuse (never did that before) or do I use an inline fuse on the red side? I want this to always have power, key on or off. 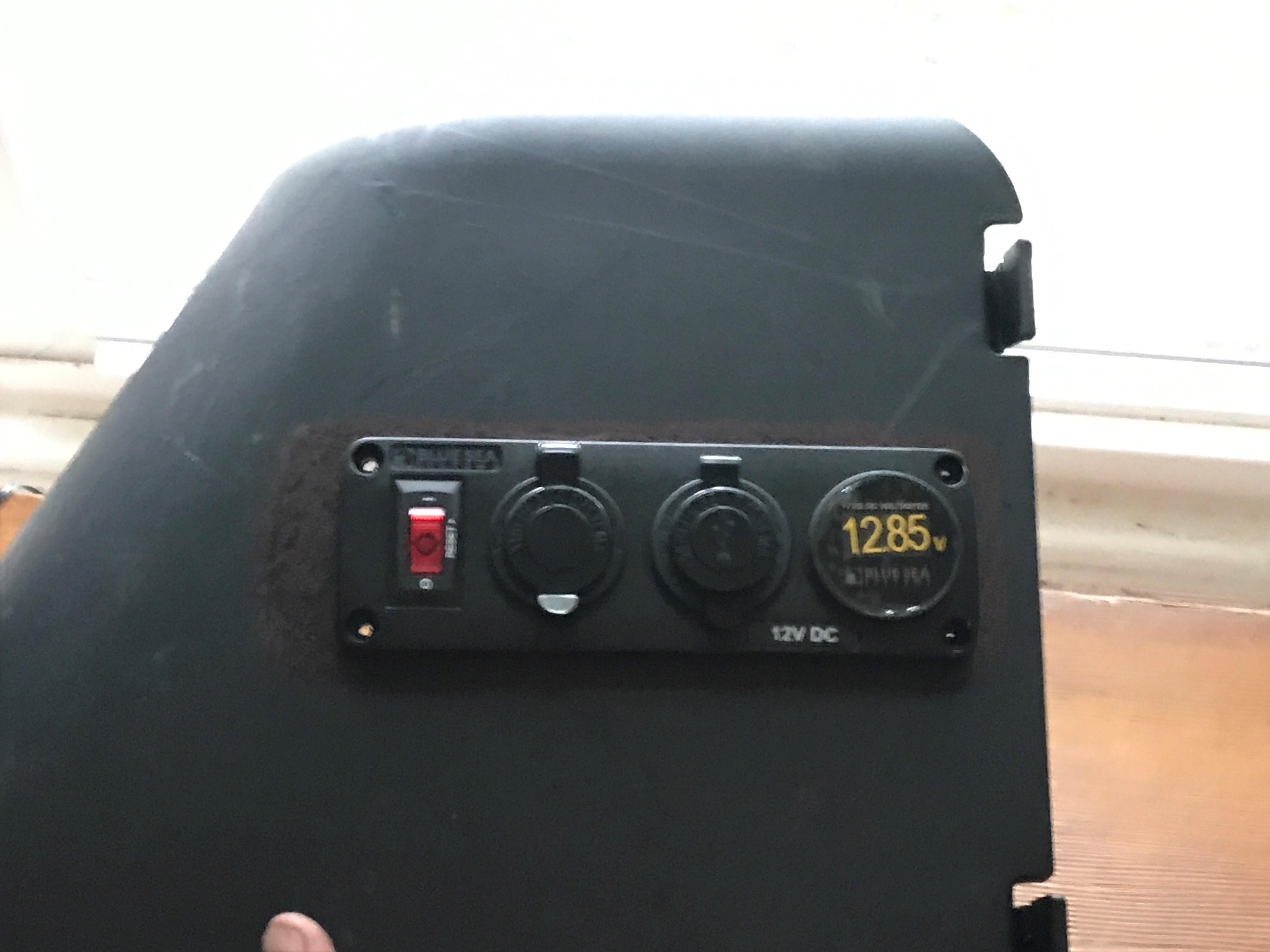 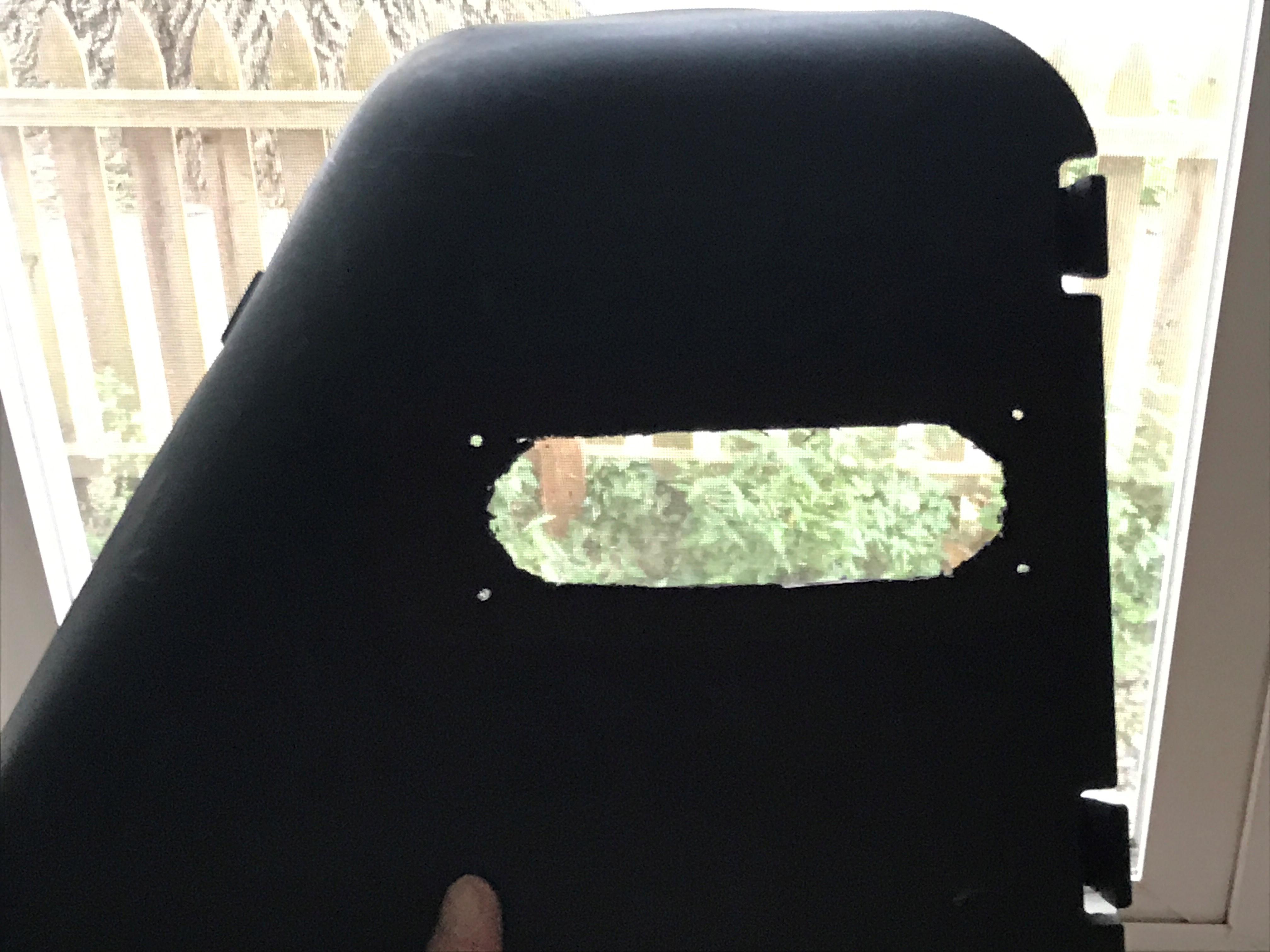 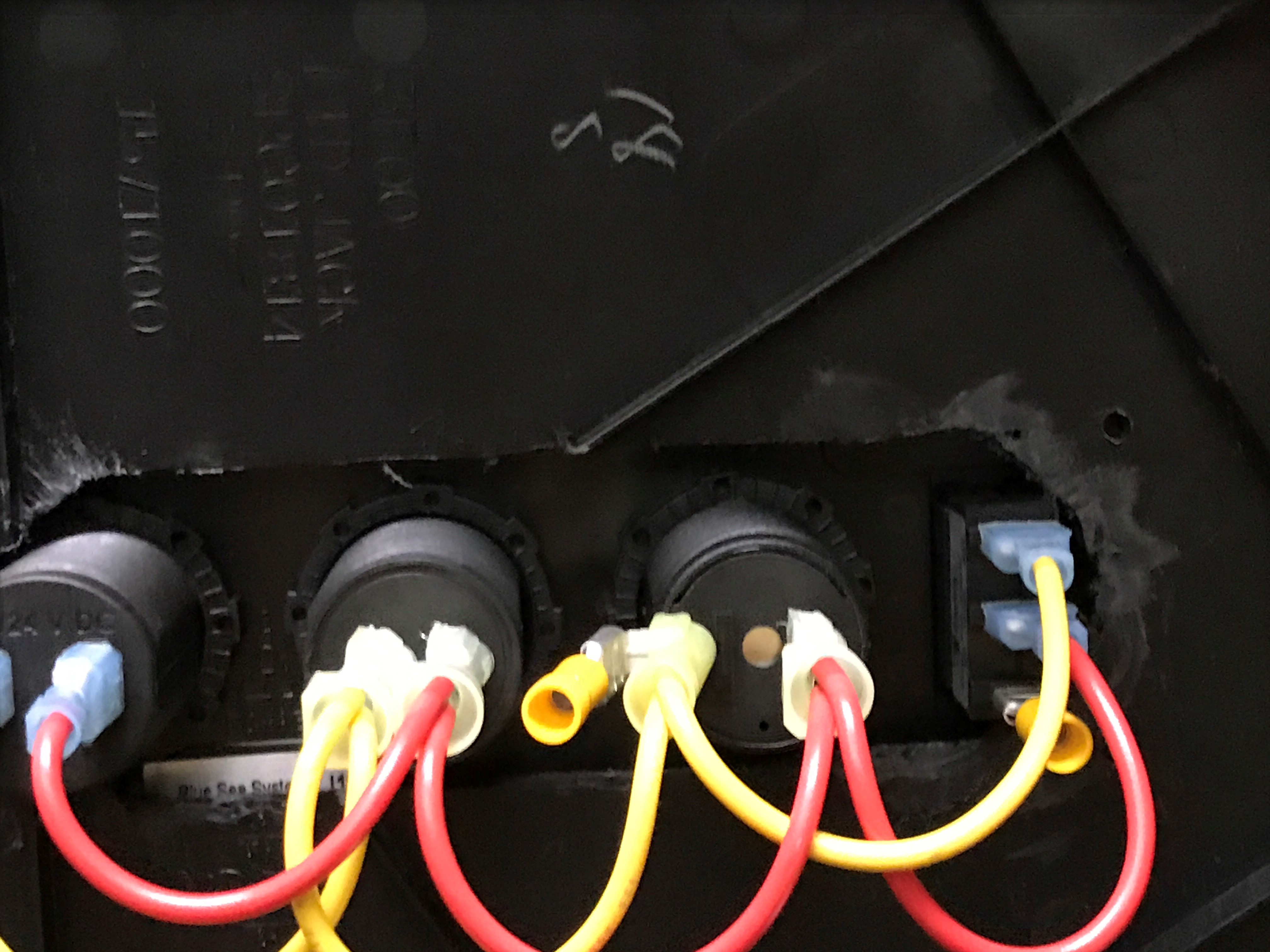 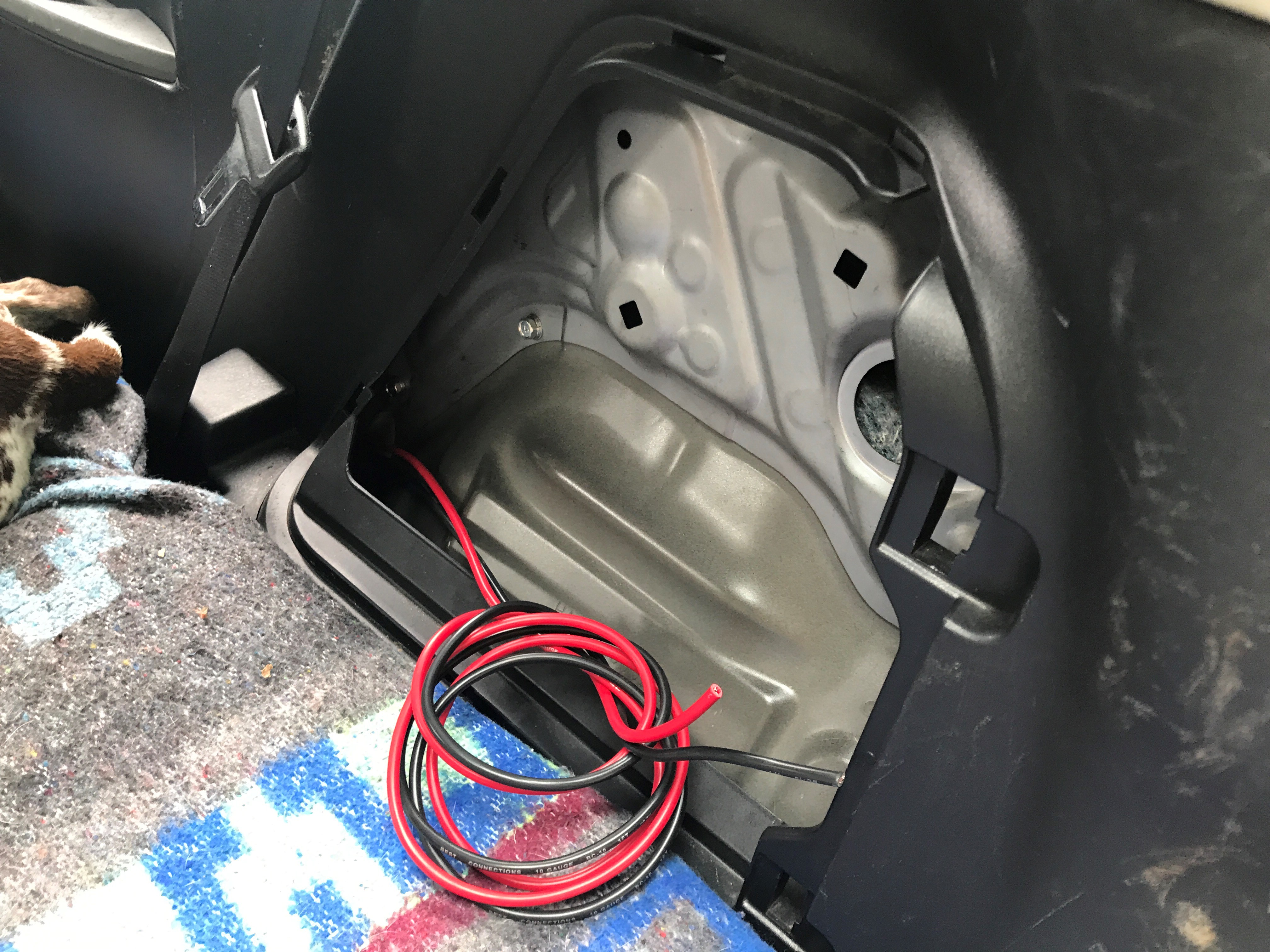 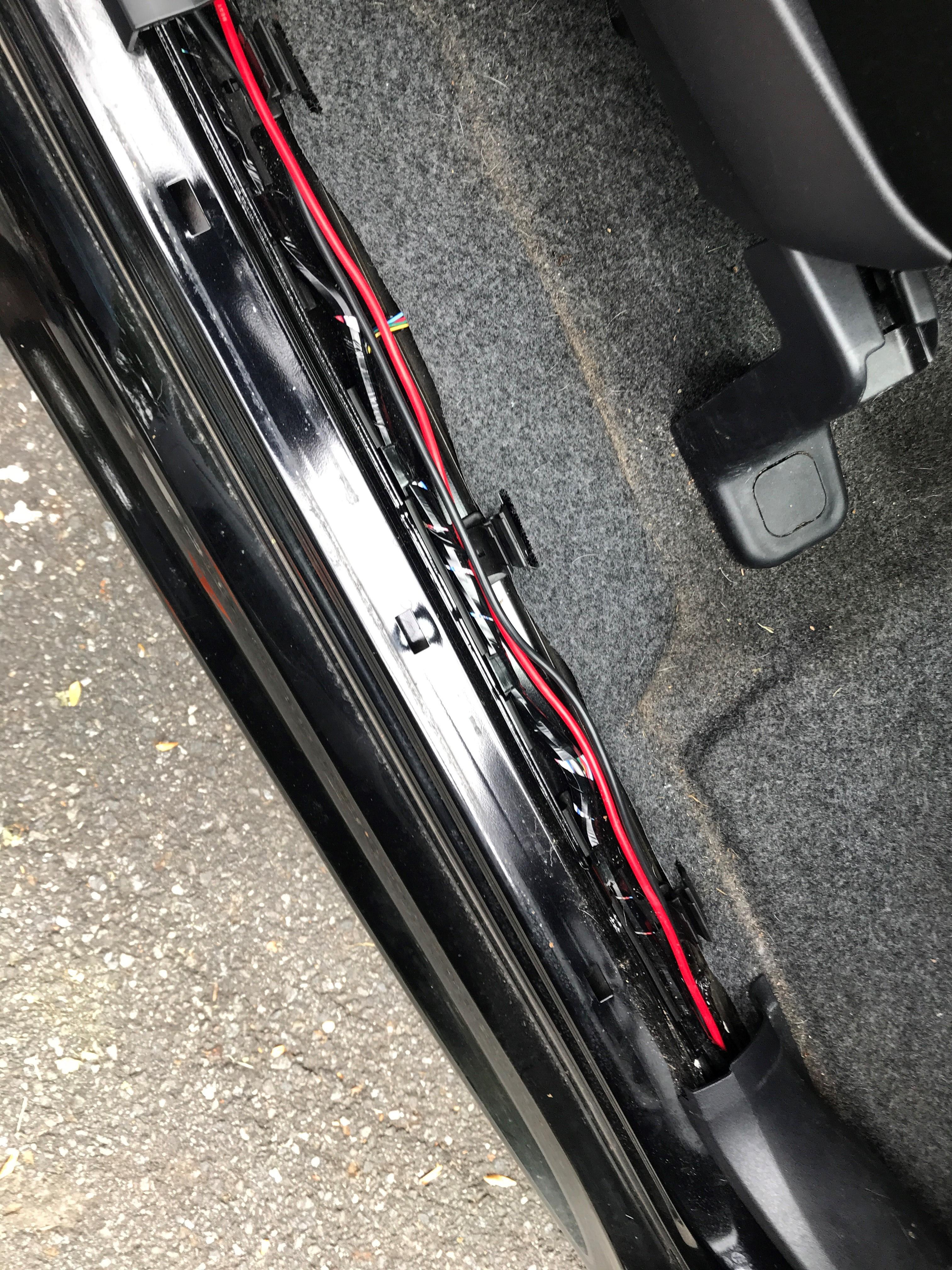 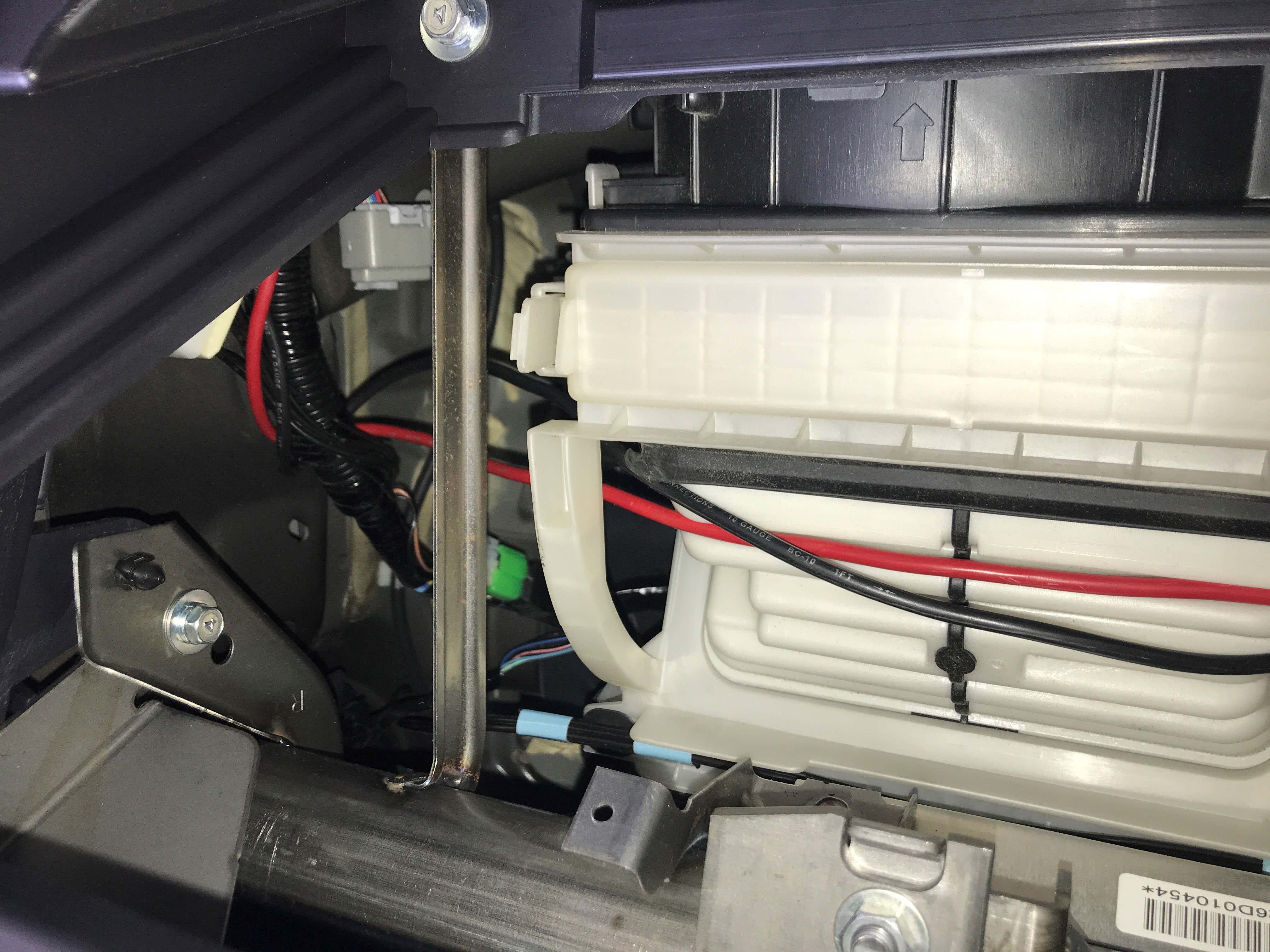 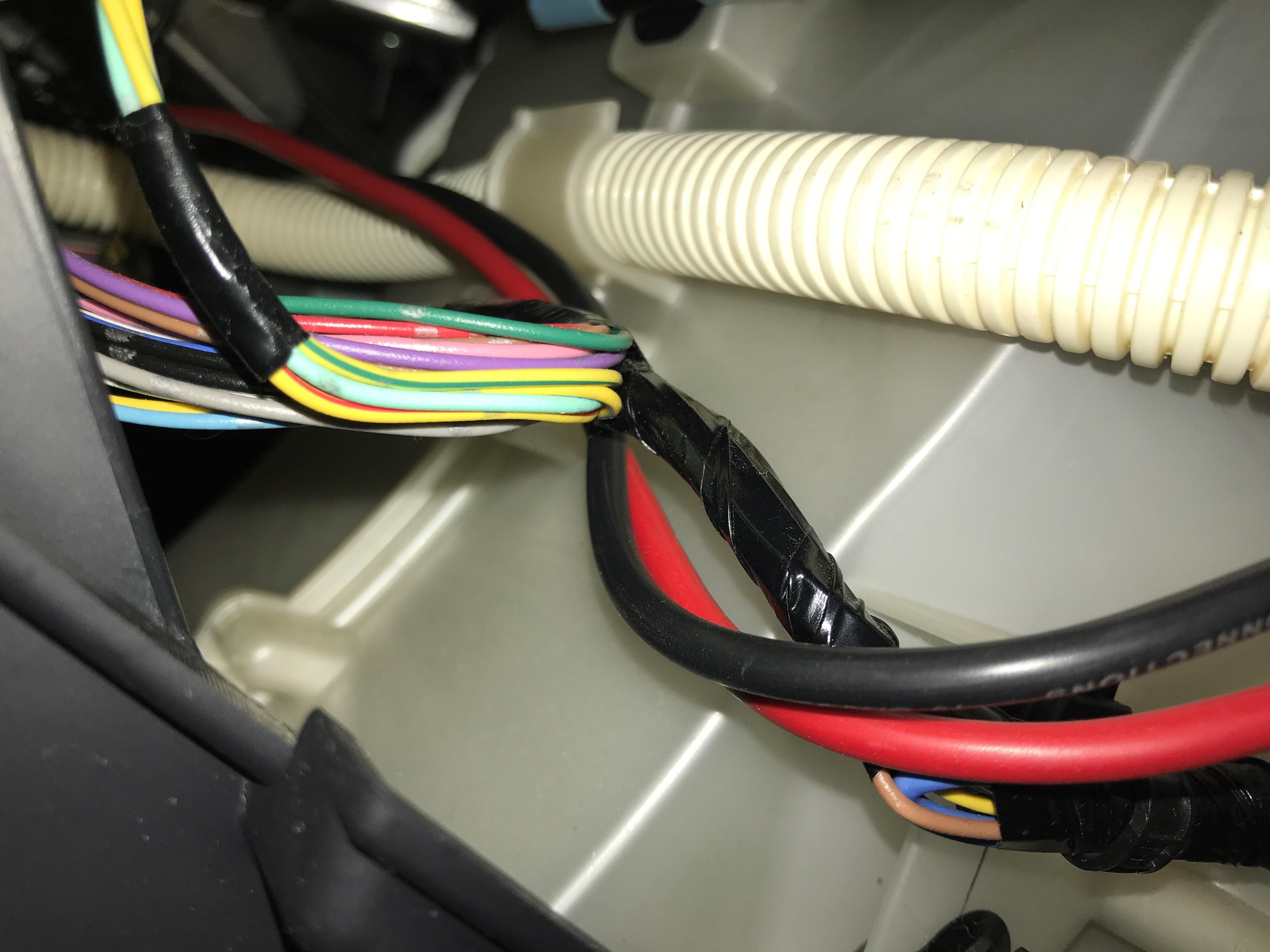 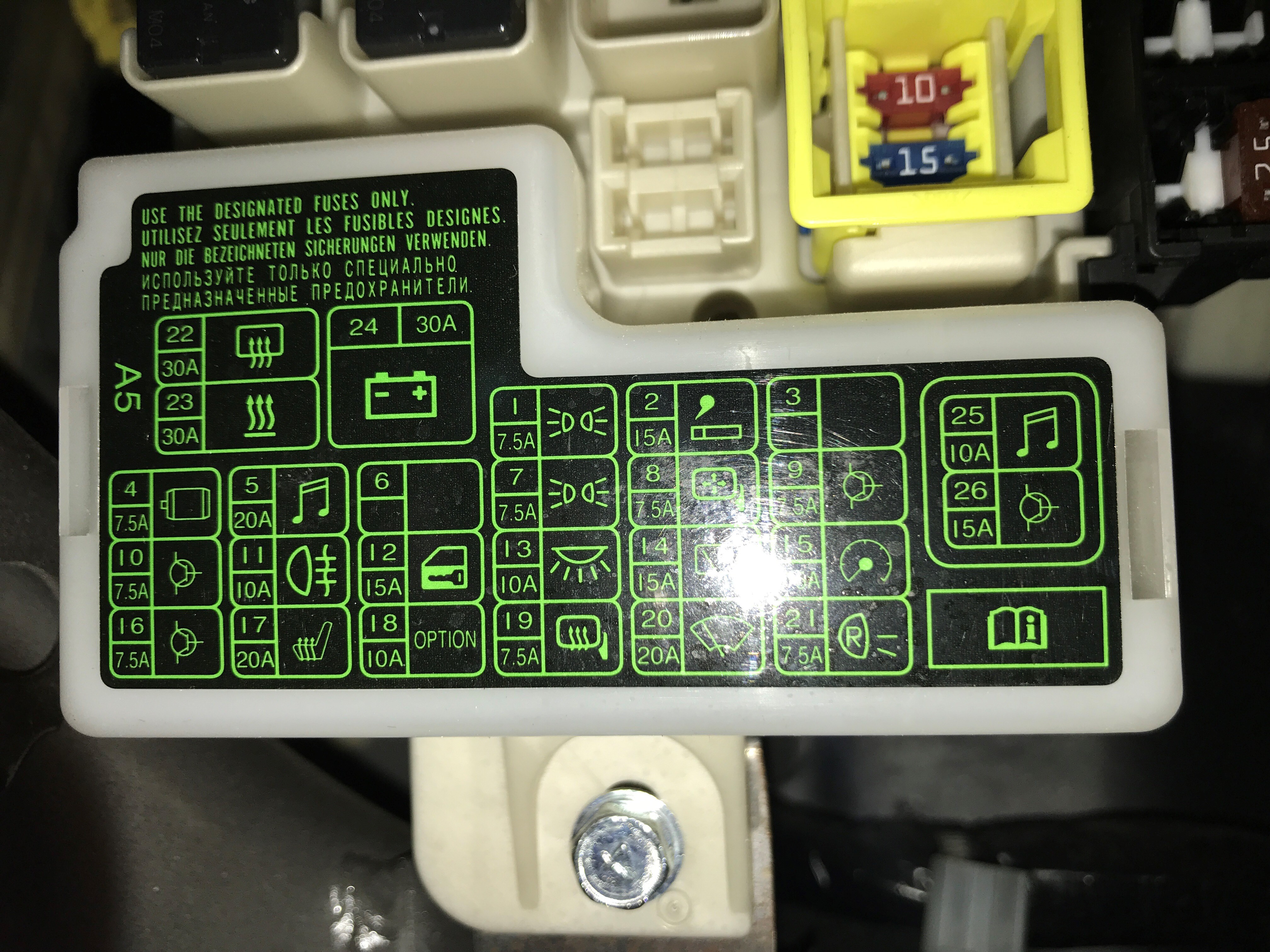 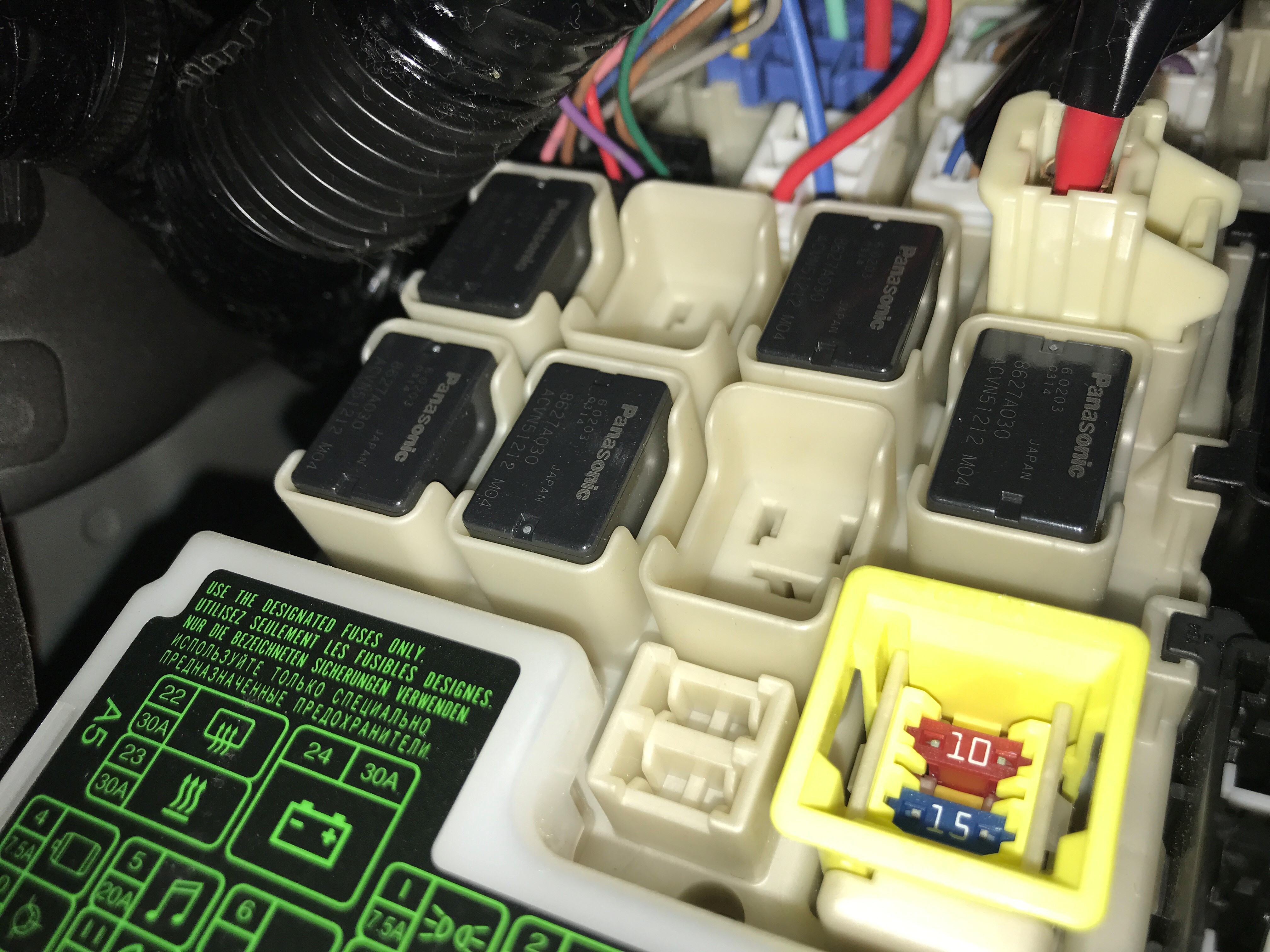 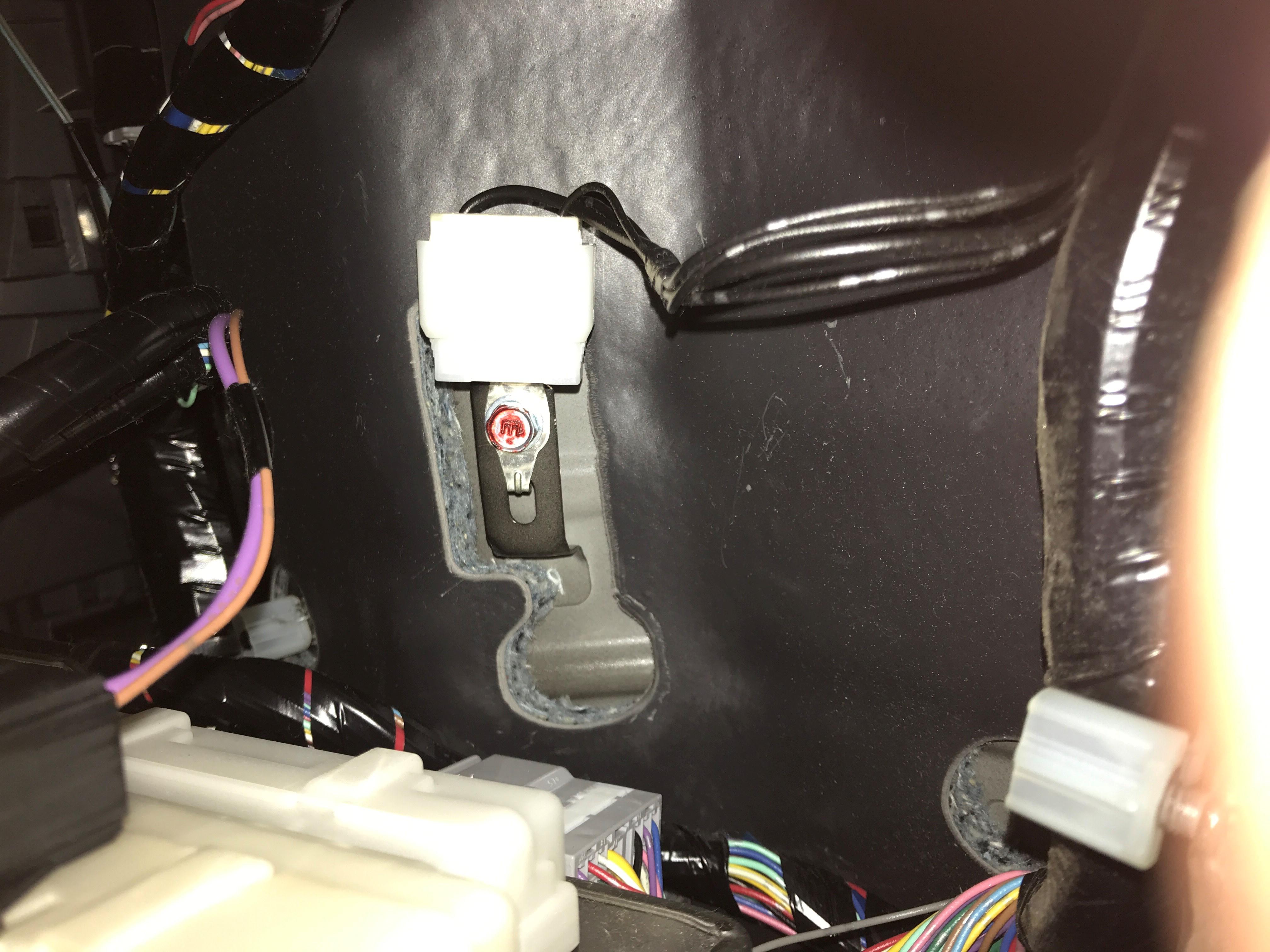 Other connections near fuse box 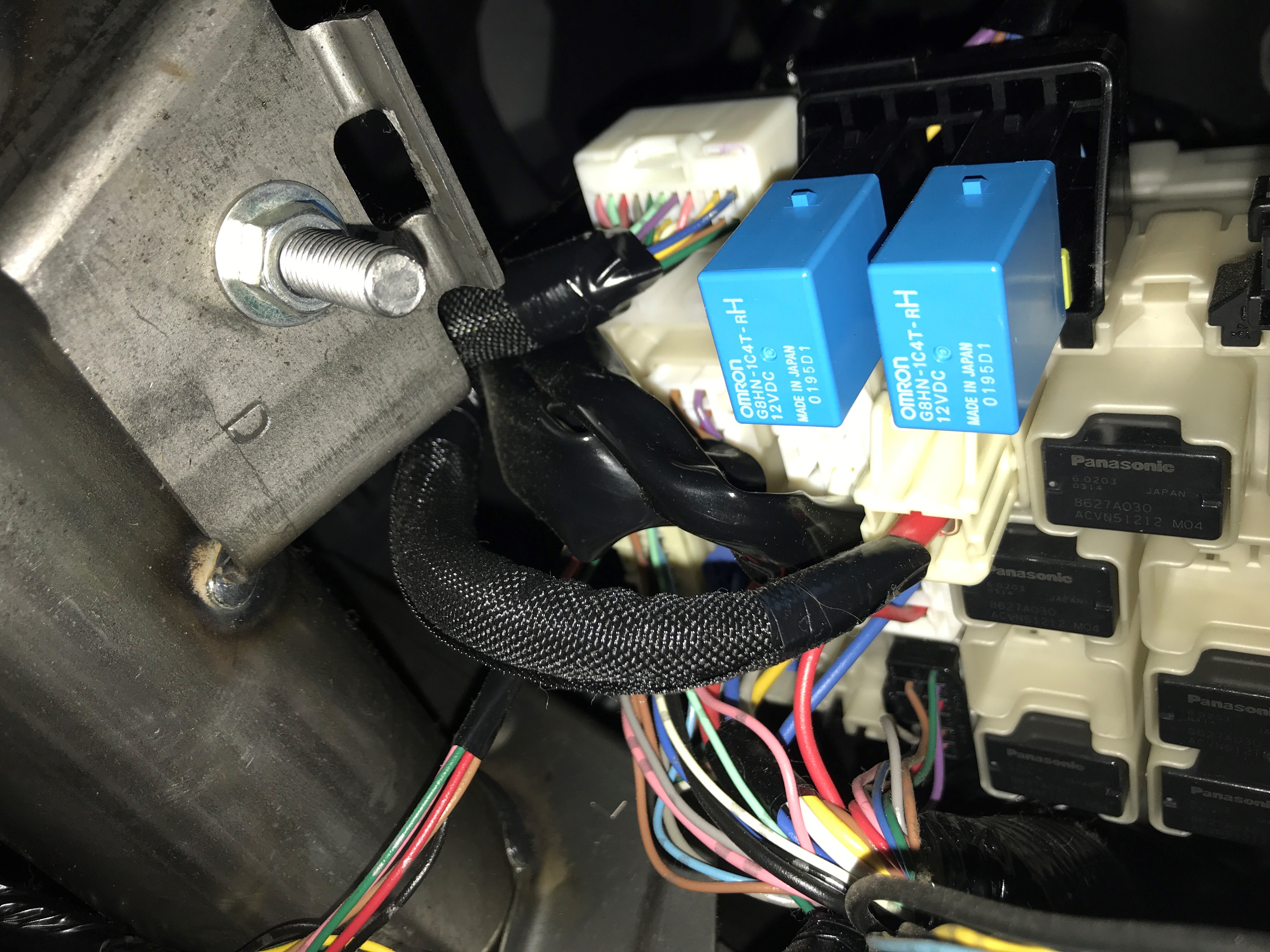 I had the need for 12 Volt on all the time also, mine for a 300 watt sine wave inverter. I picked up the ground behind the panel that you show your set up mounted into. The always hot positive is available at the front side of the On Board Charger under the rear deck. I just removed one of the child seat restraint attachment points and ran the positive through a plastic grommet through the bolt hole left behind. Sealed and supported on each side by a good dollop of 50 year silicone caulk, #10 wire and a 30 amp wet location inline fuse very close to the positive post on the OBC. It's worked very well for 3 years now and was easy to remove and re-run for a warranty trip to the dealer. Never know any of it was there unless the cover is popped and the inverter behind it is in use.

Aero's suggestion is better than mine, but since you have the wires already laid from the rear to the front:

i think the large diameter red wire coming in to the relay panel shown in pictures 10 and 12 of your set has 12V directly from the battery. There is also the 30A fuse #24 underneath the white plastic panel that could be another option.

An inline fuse could be added to your red wire right at the tap that you pick at the junction box and a slightly smaller one also added behind the panel where it feeds your outlets and meter (where it would be easier to replace if needed).
kiev = kenny's innovative electric vehicle

The pictures are now numbered in the previous post.

I like the idea of tapping in at the rear because it is closer, but I want to do a permanent install and not have to remove anything for dealer visits. I also don't want mechanics later blaming something on tapping in somewhere that is not approved. And since I am a novice electrician, and still can't figure out the numbers, and since I already have the wires run to the front, I think I like the 30A #24 fuse idea the best. It isolates everything to that one fuse. Plus I would like to know how to do that. I see an icon of a battery on that fuse. Is this fuse open/extra? Is that what that means? How do I connect something to it, do I remove that silver bolt into the white plastic below the fuse box panel [picture 9] to access the rear of the fuse box?

And about the fuse at the rear of the car just before the 12v Blue Sea panel....I thought that the Blue Sea unit had a 15A breaker and that is what the orange switch is for, to reset it in case of tripping over 15A....but it is unclear in the Amazon description. But the description does state the 15A thing and the side of that orange rocker switch is marked 15A....

bradleydavidgood777 wrote:
So I'm not sure 30A at the front fuse box is a good fuse size - might need 15A at the fuse box???

I would fuse the front at 20 amps for two reasons. The set up in the back is breaker is 15 amps. I'm not sure what your wire size is, looks like it's 12 or 10 gauge which is good. By going slightly higher with the feed fuse you avoid nuisance fuse blows which could come at a bad time. The idea behind the fuse up front is to protect the long feed wire from starting a fire if it were damaged and shorted (of course). So there is no reason to go larger than needed. In a pinch type short situation a 30 amp will take longer to blow. Maybe enough longer to start that fire we wish to avoid.

I likely didn't need to pull my positive wire out for the trip to the dealer. I just know dealers all too well and any modification whatsoever can be cause for them to not honor warranty issues. Sure, with a fight you can usually get them to acquiesce and honor the warranty. Life has too many fights already. As a safety issue, the main power lead from the OBC to the 12 volt is fused at the battery (up front) which means that the DC to DC converter in the OBC is protected from over current situations internally. So it is safe to connect another reasonable load to it (50 amps or less). Like you seem to intend to, I only use my set up to charge/run other items while the car is charging. This pretty well insures that there will not be high 12 volt loads in other OEM systems of the car which could approach the limits of the OBC's ability to supply them when added to the auxiliary non OEM system added.

Thanks for the additional info about the rear install and dealer.

I'm still leaning to the front connection....I guess at 20A since your reasoning makes sense, but wouldn't the 15A breaker trip from a load on that rear end before the wire melts?

And if I have 10 gauge wire then wouldn't it be relatively safe to have a 30A breaker in the front? Meaning, couldn't the 10 gauge handle the 30A? Because it would be nice to be on 30A if I could in case I want to do other things off that same rear wire later.

I put this project aside for a while and didn't know what to do with it. I am afraid to tap into wires, especially the large red one - I don't have any wire taps that size and even if I did, I am afraid of damaging it by using slightly the wrong size or something.

I also looked into the 30Amp fuse someone suggested. I'm not sure how I'd tap into that. I watched a youtube on wire tap pigtails, but the 30amp fuse is a square kind and I don't see any like that for sale.

I think I'm giving up or considering getting a professional to wire it.

Would this be something the dealer would do? Or a car radio install place?

Or maybe you can convince me to try it.

Pretty sure you're already aware of this, but if it's hot 24/7 and there's no way to shut it off, the voltmeter on the Blue Sea panel will run your battery down over time - Not sure how much time it will take, but I have a dual USB panel with a voltmeter in my motor home and it ran the battery down in only 3 or 4 days and my battery is at least twice, if not 3 times the capacity of the little 12 volt battery in the iMiEV. I ended up having to put in a switch to turn it off anytime I'm not using it

Nope, didn't know that, so thanks! I think this is officially going under the category of abandoned projects. Looks good in the back of my car though!

I really don't care about it anymore at all. Glad to have another reason to not do anything more with it.

Sometimes you get onto things and are all into them and then you wonder why you did that. This was one of those. Funny too because I have since stopped taking on extra stuff like this in life and enjoy it much more. It was like this project was the last one like it.

So I learned some stuff about wiring and that I didn't want to do it, and I learned something about taking on extra projects that didn't have a reasonably big enough benefit. All good stuff.
2017 I-Miev
Post Reply
Load more posts
26 posts