I called today and the dealer don't know if the new battery pack is brand new or refurbished. He confirmed that the warranty period is not reset.

So i took my car in last monday, dec 11, and today i got a call from the dealer that the 3 outstanding recalls had been done and that indeed cell #47 seemed to not be working properly. Now they need me to fill out the questionnaire and they will send to Mits for disposition of getting a new pack.

What was interesting is that he said the dolly tool package had been shipped and was expected to come in tomorrow, but it was not for me--little did i know that they have another car in the shop for a pack replacement that was in line before me...i hope they can get a pack in for me quickly and just hang on to the dolly a bit, but of course there could be other folks waiting across the country and will just ship it right back out.

i asked about what happens to the old packs, and if i could buy it, especially since i knew the car and the history of my pack--as opposed to buying an unknown pack out of a wrecked car. Eventually we are going to need a supply of cells to swap out individually when packs are no longer under warranty. He said there wasn't even a price listed for a pack in his parts order system, and doubted that they would want to sell it due to liability issues. Also a separate company handles the pack recycling, it is not done directly by Mits.

Maybe i can get some pictures of the tools and the pack swap for the other car in the shop tomorrow...
kiev = kenny's innovative electric vehicle

No pictures of the dolly tools because they weren't delivered today, although i saw the pack for the other car.

The story for her car was a little cloudy, something about it wasn't charging for over a year, that it was no longer under warranty, that she used oversized tires which threw a code and caused the mileage to be incorrect, but somehow they got Mits to replace the pack...? sounds so bizarre, i hope i get to meet her and get her side of the story.

Here is a copy of the 2-page Customer Interview Sheet that they use for the iMiev when there are problems with the little electric car, and it covers more than just pack problems, although that is the primary focus.

edited to use the higher res versions: Hmm, looks like a more-refined version of the questionnaire I filled three years ago when the battery pack on my used i-MiEV failed soon after I bought it - I didn't have the presence of mind to ask for a copy. I did, however, insist that the dealer attach my detailed account of the failure progression and the fact that I had bought the car from someone who lived in Bakersfield (VERY hot in summer) and routinely left the car plugged in charging fully every day while at work with the car outside in the hot sun.

i got word today that a new pack was ordered for kiev1 on December 28, and that the pack tool kit has been delivered to their shop. They have another pack sitting near the lift that was previously ordered for the white miev owned by a woman who works downtown right across the street from the free Level3 Chademo charging station.

Piev was charging his car down there yesterday, and she saw his miev and walked over to talk to him. She was quited surprised to find that she could have been charging her car there. In addition he verified the story that she was using oversize tires and the flack that Mits gave her when trying to get the pack replaced--even though she had bought the car new plus the extended 7-yr warranty--maybe it affects the odometer such that the mileage limit for the warranty could have been exceeded or unknown?

Her range is down to 35 miles but it is sufficient for her driving needs, so she hasn't been back in to have the pack replaced yet. The service manager said they would do mine first once the pack was delivered since she is still driving and not in a hurry for the swap
kiev = kenny's innovative electric vehicle

Good News--my raspberry jelly bean got a new pack today. The tool kit was delivered around dec 22, and my pack was ordered on dec 28. Not sure when it came in, but they changed 2 packs this week, hers and mine.

The range meter indicated 82 miles and i connected the i909 MUT-clone to read Current Capacity as 45.20 A-hr and Remaining Capacity at 44.60 A-hr.

i will go talk to her and find out the story about the tires. i saw her car over the weekend, but didn't think to get a picture of the tires (it was a silver car and i thought hers was white)
kiev = kenny's innovative electric vehicle

kiev wrote:
Some answers for yesterdays events: The i909 MUT-clone was indicating pack at ~360 before i drove it. The delta V was about 0.2. When driving the cell 47 would rise up nearly to the other cell level under regen, and dropped dramatically under acceleration--i couldn't read the values while driving, but will try to get a helper to read the screen. i had plugged in the EVSE and let it run until it shut off.

The key must be at ON in order to get readings even though the i909 powers up just plugging into OBDII.

Read the BMU datastream: Battery Current 7A; Balancer Drives: CMU07 all ON except cell C OFF, CMU08 all ON; after several minutes of charging the BMU Target Cell Voltage was up to 3.94.

So the balancing drives appear to be ON for all cells except #47. Will see how it goes--maybe the cell will be okay.

Concerning the DTC P1A44, BMU Leak Detection, when i cleared it with the i909 then the warning lights on the dash turned off. i wonder if i induced that fault by trying to externally charge the aux battery while the EVSE was plugged in yesterday?
.

Hi all,
I swapped the cells in my iMiEV with aftermarket cells, but as they did not perform as good as hoped, I put the original CMUs back in. Shortly after the car powered up to READY, the ready light went out and the high volt warning light (yellow car with exclamation mark) and auxiliary red battery light came on. Scanned for errors, found DTC P1A44 Leak detection (BMU).
So far this is the only thread I found that mentions DTC P1A44 Leak detection (BMU) 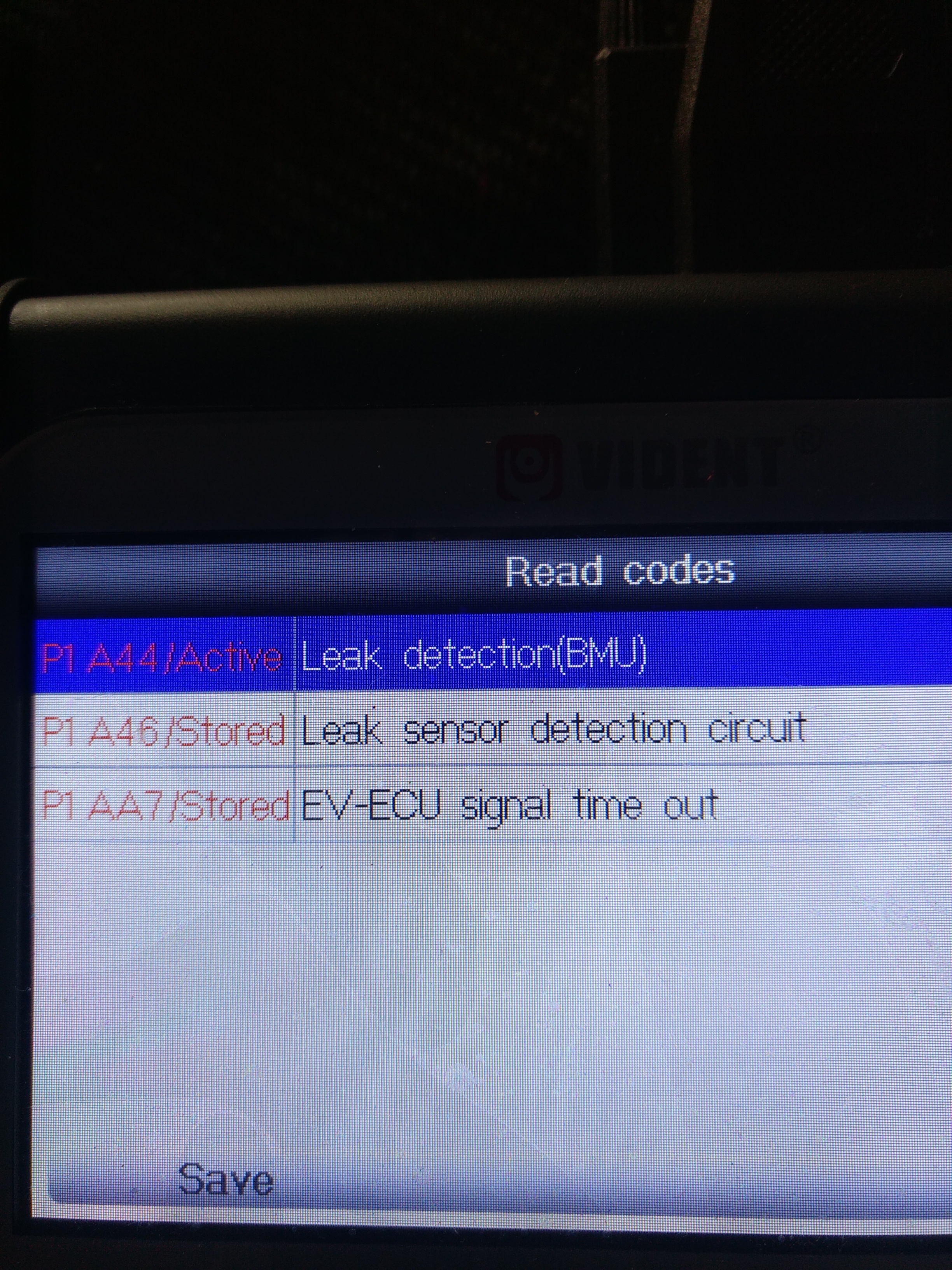 The story behind it can be read here:
https://forums.aeva.asn.au/viewtopic.ph ... &start=500
Because Kenny mentions a faulty cell, I add here that I manually balanced the cells before putting them back , my scanners (i909 and also Vident) agree max cell is 3.82 V and min cell 3.81V, so not an obviously faulty cell. All other data read on the BMU appears to be normal.
What is this leakage actually? First thought it may be something similar to an earth leakage or residual current detection to stop people getting zapped, I obviously have no idea.

nuggetgalore wrote:Because Kenny mentions a faulty cell, I add here that I manually balanced the cells before putting them back , my scanners (i909 and also Vident) agree max cell is 3.82 V and min cell 3.81V, so not an obviously faulty cell. All other data read on the BMU appears to be normal.
What is this leakage actually? First thought it may be something similar to an earth leakage or residual current detection to stop people getting zapped, I obviously have no idea.

You're not far off. The official fault code description isn't too helpful:

But what it is is an insulation test failure between the chassis/12v system and the HV system. All EV's have the DC high voltage system essentially "floating" relative to the chassis and 12v system. (In reality there is probably a very high deliberate resistance in the order of megohms to prevent static build up)

All communications between them, such as between the BMU - which is connected to the 12v system and thus chassis referenced, and the CMU boards in the battery pack - which run off the cell module voltages and are thus referenced to the HV system are done via optocouplers, transformers etc... so that there is no galvanic connection between the the low voltage and high voltage system.

One of the safety checks performed when you turn on the car is an insulation test between low voltage and high voltage systems, if this test fails you get P1A44. I was hoping the fault code description would list the minimum allowable resistance/leakage current between the two systems to set the fault unfortunately it is not that specific. My guess is the insulation should be at least a few megohms.

There are some troubleshooting steps listed:

Anywhere the high voltage and low voltage systems interface is a potential suspect, for example on another thread in here someone found a problem with insulation in the A/C compressor - since the compressor runs from the isolated HV system but has a grounded chassis:

If you've had the battery pack apart to swap cells and the problem is new since then the obvious place to look first would be at the CMU boards that were disturbed, because they connect to the HV system (the entire board runs from the cell module it is connected to) and have optocouplers that connect to the external CAN bus which is 12v/chassis referenced.

As to which ECU performs the insulation test I'm not sure but the link above suggests it might be the BMU.
- Simon