i don't remember why, but the Seiko data sheet for the S93C76A seemed to be a good match, http://www.farnell.com/datasheets/46815.pdf
and there seems to be an ABLIC version that is about the same also.

i had plenty of false readings using the Github arduino code which may have been related to the use of the ORG pin on some of the other versions such as the 93C76C, but i don't recall that either.
kiev = kenny's innovative electric vehicle

DBMandrake wrote: Finding the secret sauce to easily renumber CMU's using a readily available third party diagnostic tool such as Hobdrive / icarsoft etc (no soldering/eeprom swapping) would be a breakthrough for the DIY and aftermarket repair and servicing of these battery packs.

I'm making slow progress on reading CMU firmware, and I think I've got to the stage where I can speculate how this happens.

1) It may be necessary to start with a CAn bus message (on the bus that CMUs are on, I don't know if messages from the main CAN bus pass through the BMU to the CMU) with message ID 0x3C3 (the same one that does bypassing), with D4 set to 4 (or at least, has D4[2] set). You can't say "leave the bypass bits alone", so you have to choose what you want with the bypass bits if you want to send a 3C3 message. All zeroes for the rest of the packet should force no bypassing.

I believe that a task function is awoken that will save the new ID into EEPROM (the first word, it seems to me, though it's possible that it moves around).

So: not terribly convenient perhaps, but it should be possible to make up a gizmo that plugs into the appropriate connector and sends the bytes.

Anyone know what the crystal frequency is? The processor manual (if I have the right one) says it will work with 4.0 - 20.0 MHz crystals.

I don't know how to look this one up: 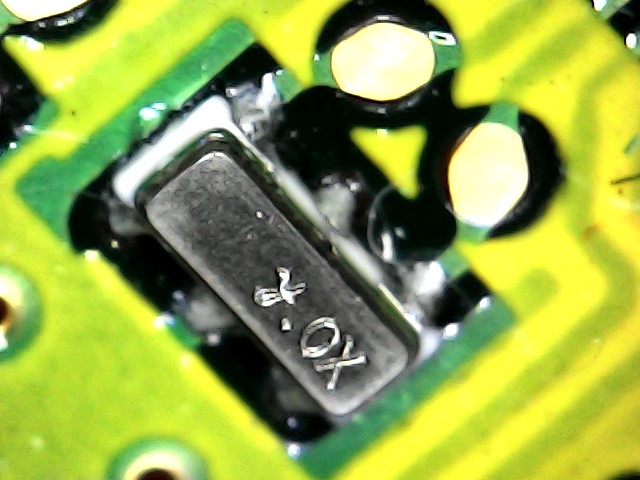 It's almost like y.0X, with the leading "y" in a cursive font. [ Edit: either dot zero X or dot oh X. ] Maybe the cursive "y" is a manufacturer's logo. I did a quick search, but I don't know how to find those either.

On my board the crystal is marked "X0 . n" . It appears to be a murata part, 10Mhz, based upon the marking code,

kiev wrote:It appears to be a murata part, 10Mhz, based upon the marking code

Brilliant, thanks! [ Edit: I wasn't expecting a "resonator"; I don't really know the difference. I remember Murata made 455 kHz ceramic resonators (for radio IF filters) in the 1970s. ]

So that's confirmed then: the auto-renumber data is at 300 bps, and the test/debug data is at 9600 bps.
Post Reply
Load more posts
25 posts