Losing Charge When Parked Up

They told me that error codes P1A2F and P1A4B (Malfunction of the BMU traction battery cell system) are showing up, and I would have to pay over 1 million yen ($7,000 USD at the current rate) to replace the traction battery, which is obviously unrealistic for a car I bought at more than half of that :roll:

If the OBC fails completely, it would qualify for a service campaign they say...


I have been getting "cell voltages difference too large" errors as shown in Hobdrive, so I may need to do a few "calibration" charges.
The charging stand I use most frequently has an unusual charging curve, as it doesn't seem to taper off much at all when reaching a higher SOC, so I am not sure cell balancing is taking place.

We haven't seen or heard much from any Japanese owners so this was very interesting to see the various types of charging stations available there, and also the "mode1" charging cable.

Before the OBC is activated there is a communication signal between the EVSE and the car. If there is anything sensed as being incorrect in this signal, then the session will fail and no charging occur. This is not the same as an OBC hard failure due to blown components. The various EVSE manufacturers may have implemented the protocol in different manners such that some don't work with the imiev. This happens with the Nissan Laef also, some work and others don't.

About the DTCs:
If the BMU gets a voltage reading from a CMU that a cell(s) have more than 0.2 V difference from the rest, then it throws the P1A4B code to the EVCU, which then throws the P1A2F, so those 2 codes are just the same fault. So there is likely one or more cells that are weaker than the rest, and most any of the OBDII scanners or phone apps can read and display the cell voltages to determine which are the culprits.

The pack and cells were designed and assembled to be easily serviceable, but the Mitsubishi Service Manual does not pursue that repair path, it just indicates to replace the entire pack. That is quite a wasteful approach, but it is a safe repair strategy from both a technical and legal liability view .
kiev = kenny's innovative electric vehicle

Thanks to miggols99 for sending the data from the trip shown above.

First of all, changes in SoC2 when starting the car after an idle period do occur. However, they are not common. I have found about 10 instances in about 400 hours of data collected from my CZero. SoC2 is the SoC shown in the screen shots in miggols99's post. It is also the SoC reported by e,g, CaniOn. Changes in SoC1 are more common. SoC1 is reported by the car in the same PID as SoC2. It is shown on the OBD screen in OBDZero.

The BMU uses idle periods to compute the true SoC based on the low current voltage of the battery. It is the same process that occurs during the 10 min. pauses while the car is slow charged. As a rule only the SoC1 is adjusted to the true SoC but sometimes both SoC1 and SoC2 change. I believe that SoC2 only changes when the difference between the true SoC and SoC2 is large.
This change in SoC2 does not mean that there is a real change in the Ah or Wh in the battery. It only means that the BMU’s estimate of the Ah in the battery changes. As a rule the BMU keeps track of the Ah using coulomb counting. However errors in this count accumulate so the BMU needs to check its Ah account once in a while. A new value for the Ah in the battery is computed using the BMU’s present estimate of the battery 100% capacity and the true SoC based on the low current voltage.

Looking at the data miggols99 sent I can see that the SoC2 and the battery’s Ah estimate changed twice on the day in question. This graph shows the changes. 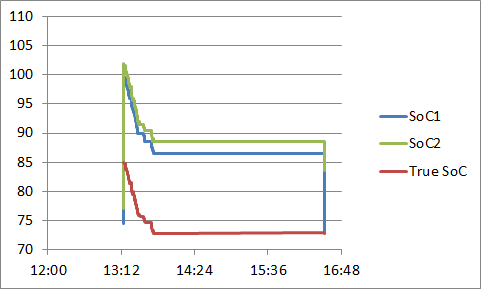 The first change came just as OBDZero started collecting data. Both SoC1 and SoC2 shot up to 100% from about 75%. The second change came after the idle period when SoC1 dropped to 73% and SoC2 dropped to 84%. I looked at the cell voltages for the battery's good cells at the times for these two changes and I believe the true SoCs were 85% to start with and 73% after the idle period. I also believe that the BMU overestimated the SoC to start with because the poor cells in the battery had a higher voltage than the good cells.

This next graph shows the Ah in the battery. 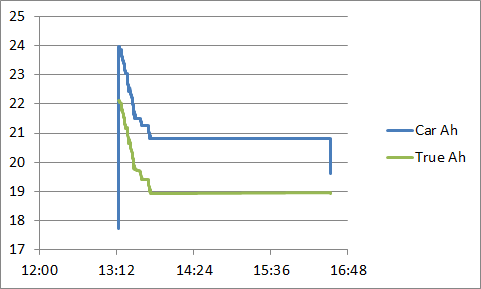 The blue line is the BMU’s estimate and the green line is my estimate based on the true SoC shown above. Note that there is no drop in the true Ah after the idle period. 23.5 Ah is the BMU’s present estimate of the batteries 100% capacity. I would guess that the best cells have a capacity of 26 Ah while the poorest cell is much lower than 23.5 Ah

Unfortunately the instability of the voltage and the BMU's Ah estimate are more signs that the battery is in poor condition. This last graph shows the highest (red) and lowest (blue) voltages of each of the 88 cells in the battery. This is based on data miggols99 sent previously as well as the data shown in the graphs above. 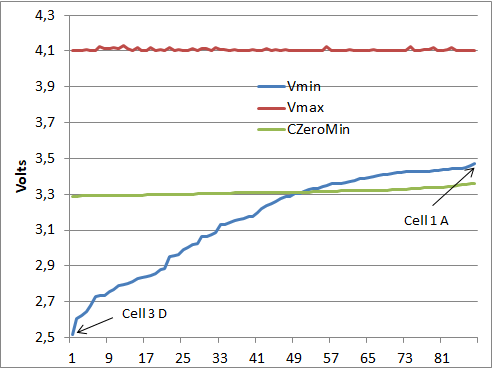 For comparison the green line is the lowest voltages for the cells in my car. It looks to me that at least half the cells must be replaced before the battery would have a capacity that would be worth the effort and cost. I would guess that replacing the whole battery would be better. Another thing, the 6 poorest cells have a minimum voltage below the design 0% SoC of 2.75 volts. This may be enough to claim that the battery has reached its useable life.

Btw it is now easier to analyze OBDZero data because the newest version (3.90) provides a initial value that limits the amount of data recorded. This makes it much easier to import this data into e.g. Excel.

After multiple "calibration charges" I didn't see any improvements, but when charging at my usual 200v charging station from around 7 bars (just below halfway) today, I think I saw the car finally calibrate itself!

Usually I would see the charge rate stay fairly high (around 1500w) until SOC 1 reached 100%, with SOC 2 around 5% higher, but today the charge rate tapered off quite a fair bit to around 0.3 amps, with a much smaller difference between SOC 1 and SOC 2.

It did stop at around 97% for some reason, but after doing my usual errands with a lot of short trips, the RR is no longer readjusting/dropping!

So the car calibrating itself seems to have been a fluke, as I am back to the same again...
I do get ridiculously unrealistic RRs at 100% though (low 90s) which the BMS readjusts for after multiple short trips.
Driving relatively economically, I am getting around 70km range from 100% to 20% (2 bars flashing).

Time to consider looking for a younger car, or maybe even the successor?
EV: 2009 Mitsubishi i-MiEV
ICE: 2019 Suzuki Wagon R

Time to consider looking for a younger car, or maybe even the successor?

MickeyS70 wrote: As long as 70km on your bad battery gets you trough the day I wouldn’t be too bothered with a fluctuating RR…

That would be true if I had access to a home charger...since I'm renting my only choice is a cable going to a 110V outlet which I have to run out the window from the second floor

The management company wouldn't even give me the time of day when I asked about them installing a simple plug socket, so that leaves me reliant on public charging.

If Chademo wasn't so slow (I only get around 3-4 kWh in 30 mins, plus the majority charge per the minute rather than the kW), it would be more tolerable. Since it was so cheap and I'm saving so much money anyway, I'm thinking I will just put that towards a better car.
EV: 2009 Mitsubishi i-MiEV
ICE: 2019 Suzuki Wagon R

miggols99 wrote: ↑Thu Nov 10, 2022 2:36 am
If Chademo wasn't so slow (I only get around 3-4 kWh in 30 mins, plus the majority charge per the minute rather than the kW), it would be more tolerable. Since it was so cheap and I'm saving so much money anyway, I'm thinking I will just put that towards a better car.

Now I see where you’re coming from. I think you have already answered your question in a different discussion: as Chademo is your main means of charging then the I-MIEV M (SCiB technology) is the obvious choice even if that means spending a bit extra…
Post Reply
17 posts