What Other EV's Have You Driven?

iwatson wrote:A Chevy Volt - Owned for the past two years. The first time I ever drove it was when I drove it home from Dallas Texas to Memphis, Tennessee. Love It, Love it, Love it. Use it as an EV to commute to work and back with no range anxiety when called upon to make unexpected or unplanned excursions. Also have made several road trips. Love the versatility and the fact that there are no compromises when transitioning from an ICE car.

2 Nissan Leafs - Test drives, Really liked it but my wife didn't. I feel the car is more refined than the i-Miev with more range, 5 seats, larger & roomier than the miev but I was concerned about The battery pack not having a TMS and the life of the battery in Memphis hot summers. Felt that the car was too pricey for a limited range car.

I-Miev. My wife's new (used) car. Was less than impressed with the car originally. Felt it was too small, too little range, not as techy. Rather strange design/look. My wife and children called it a clown car and suggested I wear big yellow shoes when test driving. My wife was afraid of going to an all electric car due to limited range. We warmed up to it because of price. We got it used with 8800 miles for $10,500. Monthly payment is less than we were paying in gas for her mini-van. After one month it's not a clown car anymore. She's lovin' it. This month she's put more miles on her i than I've put on my Volt. Deceptively impressive little car. Handles anything she throws at it and hasn't seen turtle mode yet. Even though it's not real high tech inside, I love how it sits up taller than my Volt and easy to get in and out of. Seats sit real firm.

Ford C-Max energi: Have test driven this car and would eventually like to replace one of my i-miev's with a used C-max energi. My wife rarely drives far (that's why she loves the i-miev) so the 20 mile EV range of the energi would work for her most of the time. Sometimes when the weather is cold she has a little range anxiety we she does venture a little further than normal. She has to drive her i-miev with the heat off which is a sacrifice I wish she didn't have to make. She also might like to take a 200 mile road trip occasionally, which is not do-able in the imiev. And the C-max energi is rated to be dinghy towed (4 wheels down) behind the motor home. Used prices are favorable.

Impact at an energy fair in the 90’s

While I haven't driven one (yet), I did see my first Model Y two days ago. Dark blue with aero wheels that drove past my work.

I have now driven a 2020 Renault Zoe EV - it's the replacement for our old Toyota Prius "long range" vehicle.

52KWh battery, hitech dash compared with my iON, but still quite a small car, especially by US standards I imagine - might even be a similar size to the US "wider" i-MiEV.

Front motor, front wheel drive, very nippy off the mark (even though I only opted for the 110KW "engine" over the 135KW sporty version).

It managed a 140 mile round trip on fairly fast hilly roads with over a 1/3rd of available charge left. Showing 230 miles range after a full recharge.

Link to manufacturers website - https://www.renault.co.uk/electric-vehicles/zoe.html - I'm guessing this car will never make it across to the US, it is getting quite popular in the UK & Europe.

Here it is plugged in (with a J1772 cable and an adapter I bought as our 2nd charging point hadn't been fitted at that time): 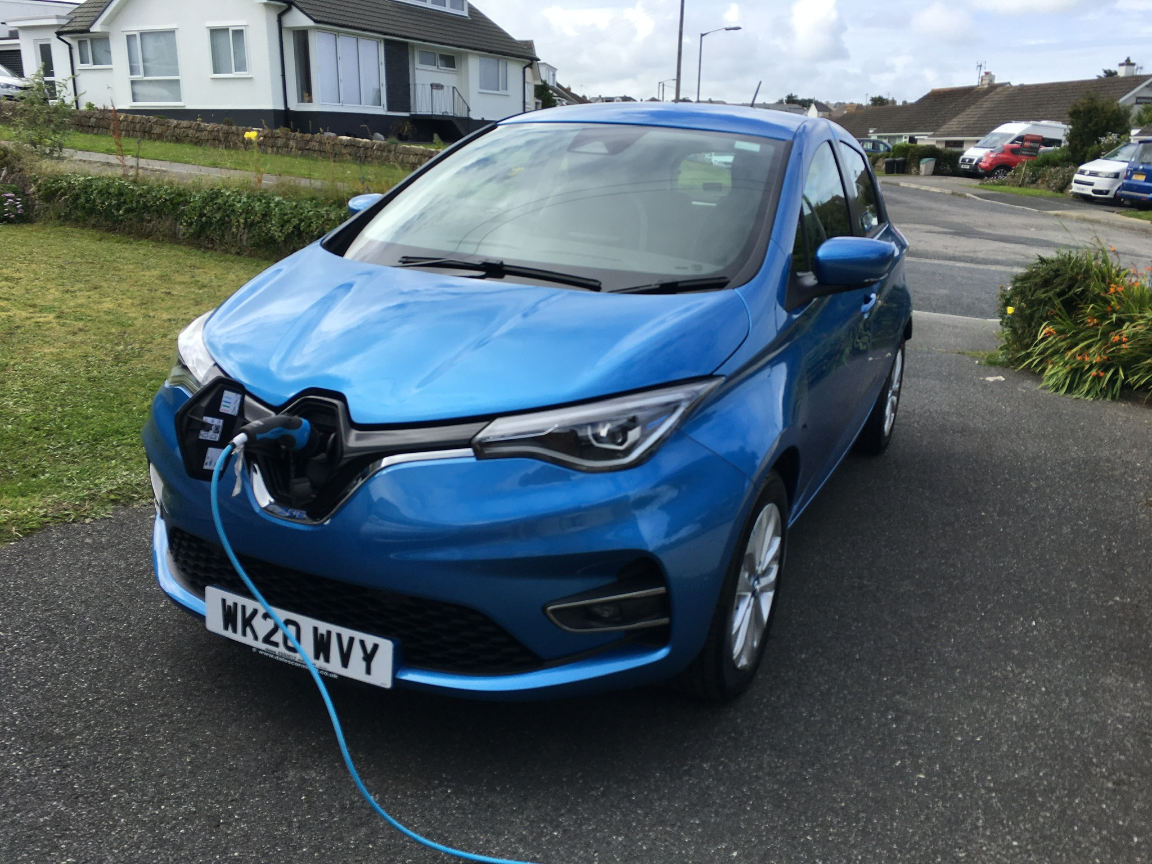 Elsewhere here, I mentioned ithat after eight years with the MiEV, Four months ago we purchased a new 2021 Bolt.
Really can’t say enough good things about it, despite the nuisance presently being told not to charge above 90%, until Chevy installs a new main battery to mitigate the tiny fire risk.

About the only thing I can think of to quibble about is this:
Like many new cars, It has a lot of intelligent driver assistance features, such as Blindspot detection, Automatic braking if it detects an impending collision, etc.
It also has lane keeping assistance. But it's Implementation of that is half hearted.
It will warn if I’m about To drift Out of my lane, and gently nudge the wheel back.
But, unlike the lane keeping Feature on the new Subaru I test drove, You can’t just let go of the wheel and trust it to keep you accurately cruising down the middle of your lane.
Instead, if you try to used it that way It sort of weaves left and right within the lane and tells you that YOU really should be steering.
It’s not that I would ever totally depend on The lane navigation feature, but if they put it in there I like the way Subaru's…And I believe many other modern cars…Implement it much better
Alex
{this message posted with 100% post consumer recycled electrons}
SE 2012 white with blue trim, powered by PV (~65%)
2015 Subaru Forester CVT
Two Trek street/trail bicycles optimized for mild around town use

Alex, look into OpenPilot. It’s a hardware kit you can add and enable some self-driving capabilities, somewhat on-par with Tesla Autopilot. It plugs into the camera behind the mirror.

Don’t know if it counts, but I took a ride in a Model S P100D early this year, including a few attempted Ludicrous launches (the car wasn’t fully prepped and had 5 people in it).

Return to “Other Electric Vehicles”