Hi guys, long ago, and again have one more OBC with failure. Was no AC and no DC-DC working. Replaced blue burnt caps, measured ceramic resistors, confirmed 9.7 and working relay. Replaced 3 big caps due to bulgy top. 20A fuse was replaced, AC charging works, but DC-DC not providing 14v to the battery. DTC: P0A09 and P1B2E key code not programmed. I seen there is manual regarding P0A09 Dtc, but suspect there is internal issue with DC-DC itself. Any hints for measuring and tracking the issue inside OBC?

Hello there,
Few time ago i bought a Peugeot ION 2011 old and after short time on board charger ruined. To be more explicit, after 7 sec the charging would stop.
From the posts i found here on this forum i was inspired and found that the 4.7 ohm 5W resistor was burned and so i changed it. Also i changed the 3 capacitors around it.
After 2 days of perfect functionality the same problem came back. The resistor burnt again. So again i checked the forum and i searched further and checked the relay by applying 4.5V on diode D301 and the relay was ok, including his contacts. (0 ohm between the white wire and N)
It is very annoying because after 1or 2 charges i must replace that resistor over and over.
In my opinion, that relay don t receive the start signal so the power goes through the resistors leading to the burning of these ones.
Can anyone help me with some ideas?
What could happen if i eliminate those resistors by bringing them to zero OHM?

What is the condition of your 12V starter battery? An old, weak or worn out 12V battery will cause issues such as this. A good, strong battery is very important for an EV, more so than for an ICE car.

Maybe the relay should be swapped out; it is difficult to judge if it is always switching fully. It would require destructive investigation into the internal relay mechanism.

Bypassing the relay is not a good idea as you would lose control of the charger--there would be no way to shut it off if an error were detected by the control board. Also there would be no precharging of the 3 big capacitors, which are having a difficult time already with the temperatures in the OBC while charging.
The relay functions as an "ON/OFF Switch" for charging and the EV-ECU would throw DTCs.

Check out the schematic of the AC Input filter and relay at this post,
https://myimiev.com/forum/viewtopic.php?p=36708#p36708
kiev = kenny's innovative electric vehicle

I got the same problem when I had to change these resistors. Below is a successful approach.

Why 50 W?
Power = Resistance x Intensity ²
Max intensity = (50 W / 4.7 Ω) ½ = 3.26 A, whereas with 10 W the max intensity = (10 W / 4.7 Ω) ½ gives a much smaller value of 1.45 A which unfortunately can cause damage in the event of a high In-Rush Current.
This new configuration with 50 W resistors makes it possible in principle to eliminate a 3.26 A current as heat without damage while giving the margin for a Push Button Manual Reset thermal circuit breaker of one Ampere to avoid any destructions.

So instead of the original thermal fuse hidden in the cemented resistance R105, a one Ampere 240V Thermal Circuit Breaker is now used.

Why 1 A?
When charging, there is always an interruption of the AC charging current for several minutes to perhaps measure the internal resistance of the drive battery. During this charging interruption, caniOn with the “Charging Amps AC” graph shows random current peaks on the AC zero Ampere baseline that do not exceed one Ampere. (1)

For lack of space, wires are drawn outside the OBC to place this assembly in the small box to the right of the iOn rear trunk. A coffee glass jar wedged in this small box contains the assembly. The starting wire of R105 is marked to feed the Thermal circuit breaker first. After passing in series through the new resistors, the return is made at R106 of the OBC.

Cross fingers, more than ten AC charges by now with this new design and no problems with the 50 W resistors and no reset of the Thermal circuit breaker had to be done.

Link to my former post on my AC charge problems 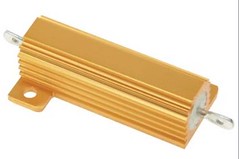 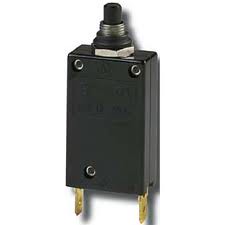 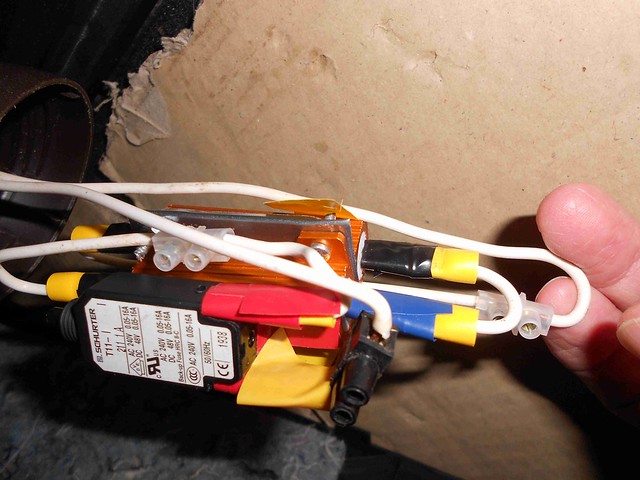 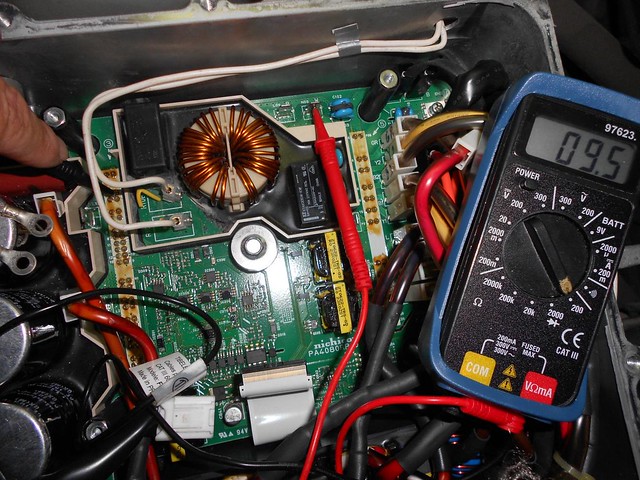 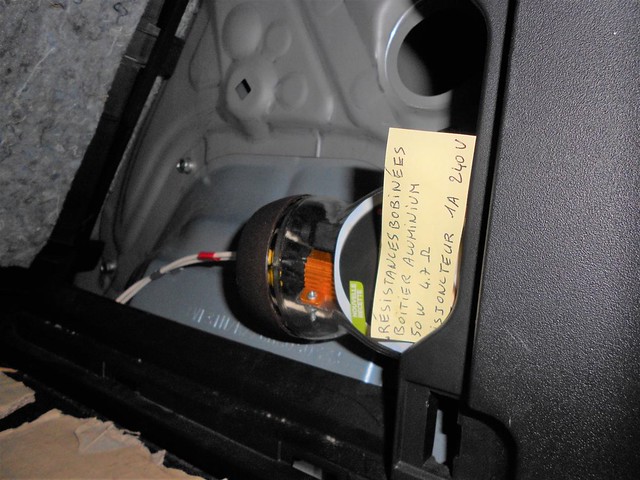 i checked the 12V battery and is in perfect condition.
i also tried the with 2 resistor 4.7 ohm 50W but these also burnt.
i checked the relay and cutting the up part and it is in perfect condition also.
i removed the diode D301 and checked it and also this one is fine.
haven t done anything else and now i have other problem:
the resistor don t burn anymore (i don't know why) but the charging don t stop when battery is full, but once i stop the charging for 20 sec and then i turn it back on, this time functionality is normal and so it stopes because the battery full.
is possible to burn diode D301 when i put it back? what type of diode is?

Yes it will burn up the diode if you put it in backwards, plus it might damage the power supply chip on the upper control board.

The first time you try it like that all the current will flow thru the diode until it burns up, and the relay will get no current until the diode is blown, then it will energize. When it gets the Off command, then the relay coil will likely get damaged because there is no path (diode) for the freewheeling current from the collapsing magnetic field in the coil.

i don't remember the diode part number; it might be listed in one of the posts if you try a search, but a 1N4001 would probably work okay.
kiev = kenny's innovative electric vehicle

Hi to everyone,
So I got back to research. I made a shunt from a resistance of 1.65 MOhm on a hybrid board - the contactors started working, car goes into READY mode, everything works, but !!!
Diagnostics shows that the charge level of the capacitor is now 361 V, with a battery charge of 355 V - that is, 6 V more than the actual one.
as I already wrote - everything works - all errors are gone.
but with slow charging (I haven’t tried fast charging yet), when the charge reaches 75%, an error appears in inverter the P0A0D (Motor drive voltage increase) and in the ECU - P1A22 (Fault in electric motor ECU (MCU) control Voltage too high).
the live data shows the voltage in the inverter is 392V, which is a so high - but I think that this value is given by the same hybrid board. the ECU shows the battery charge is 354 V, the capacitor is 310 V in freeze data.
with all this, when we turn on the ignition, the yellow lamp goes out and the car goes into READY !!! and everything continues to work.
I did not find in the forum links to similar error codes.
Does anyone have any information on how the inverter calculates the voltage that it is ready to transfer to the motor?
Is it all the same hybrid board or something else?
kind regards and special thanks to everyone who did a great job of solving problems here.

In the MCU, the HV is measured and sensed using the hybrid board. The signal goes from the hybrid over to a row of test points on the edge of the board and then thru a buffer amplifier and to the micro controller chip. i think i traced this out and posted some details in the P1A15/MCU thread.

There may be other locations that sense the HV level, such as in the OBC, in the BMU and EV-ECU from the pack CMU boards, etc.

It sounds like you are getting an error about disagreement of the HV level across some of the measurement points, most likely from the MCU data. It may be that your mod to add the resistor to the hybrid board has changed the gain of the op amp and caused a bias error for it to read higher than actual. i think someone else also did this and it is discussed in the P1A15/MCU thread.

I never paid attention on how the charges were ending, it was charge and forget. But last summer, at the first charge with a resettable thermal circuit breaker and two resistors of 4.7 Ω and 50 W, I remain present with Canion during the whole charge process to check there would be no battery temperature runaway. I got worries when SOC reaches 100 %, charge was still going on, "Batt Temp" on Canion was showing that temperature of Cell 64 kept increasing over 30°C...
My conclusion was to unplug at 100% SOC. I even made a curve (100-SOC) versus time to know when to come to stop charging...
In autumn, temperatures were more fresh, with a battery cell 64 well below 30 °C. I took this opportunity to let the charge going on after reaching 100% SOC. Battery temperature was remaining flat, AC current Charge was decreasing slowly like for a soft landing , then when AC current was around two Ampere, charge ended....
This was repeated again and again. In fact there was no problems with charge ending.
Post Reply
999 posts