391 is way too high! i suspect damage in the waffle plate with the HV diodes and transistors. Were you are to ring it out with the diode check function of the voltmeter?
kiev = kenny's innovative electric vehicle

391 is way too high! i suspect damage in the waffle plate with the HV diodes and transistors. Were you are to ring it out with the diode check function of the voltmeter?

Oh yeah much better--that is fully charged, it's not gonna charge when full. What is the error code now?
kiev = kenny's innovative electric vehicle

Hello everyone,
Even this is my first post, I am often here visiting as a guest reading fantastic posts. First of all thanks to you all for creating such an great information source! Now onto the issue. I am owning Peugeot ION 2011 and IMIEV 2015.
2011 Peugeot ION will not charge anymore at 220VAC. Fast charging does work. When I connect the 220V charger, it tries to charge and after 5 seconds it stops. On CHAdeMO car is charging without a problem.
This will perhaps will not be a big problem in normal country, but since I live in a country where in total there is 300 electric cars on street, my only hope to repair is this forum. I did drive a car to official Peugeot garage. They did check and told there is no single error on car, and why it does not charge, they do not know.
If the Peugeot would not like to help, I decide to take all action into my hands. So, I did carefully read all posts on this issue, did all checks, but all seems to be ok.
- New power cable for charging
- 12V Aux battery is new
- OBC and EV-ECU relays in the fuse box, ok
- OBC power supply, ok
We open inverter check all plates, all seems to be perfect, nothing damaged or blown off (visually check).
When we measure output from inverter at the charging start. All starts well when we connect to charger, output is measured at 340V and after 5 seconds charging stops, output is 0V. The situation reminds to situation like you connect 100% charged battery to charger, and the system send signal that battery is full and stops charging.
When the last charging was in progress, I did hear strange sound coming from bottom of the car, similar like something is sparkling/cracking in each 3-4 seconds (like some relay is on/off constantly). After this charging process was finished, I was not able to charge any more on 220VAC
On the other side, I have IMIEV working perfectly and I presume I can take down some parts for testing. I just need some advice from where to start. Is it possible just to change some parts so I can identify where the problem is? Maybe before this action (in order not to damage any IMIEV part) just to give me more idea on where to look for probable cause of problem. I am not expert in electric, but I will find one for sure.
What next step would you recommend? Let me know what other information you require.

Many thanks to all,
Daniel

Sorry to hear that you are having a problem, but maybe it can be repaired. We need to know more about how the car is responding. You said that CHAdeMO charging works, but that EVSE charging fails.

Does the car go to READY in a normal manner and run and drive okay?

Did you check the 20A fuse underneath the small cover plate of the Motor Control Unit aka inverter? Usually that has blown if there has been a failure in the OBC, and the 12V aux will not be charging while in READY.

Based upon the crackling sound you describe coming from under the car in the pack, i would suspect that one or more of the main contactors has been damaged by intermittent holding when current was flowing. This could damage the precious metal surfaces of the contact points. The other idea is that the pre-charge resistor has been overheated and gone open circuit. But if any of these has occurred then the car will not go to READY.

This post is related to the problem that ZetaFunction is having with his OBC failing to start up the LV supplies on the bottom board.

i have been puzzled by how the feedback worked to regulate the ~16V created by the big secondary on the transformer T302, so i have been doing some research and made a simulation based upon notes from the datasheet. It's hard to believe all the stuff they crammed inside that little 5-pin voltage regulator device.

The Red LED represents the photodiode of the photocoupler.

The sim is switching the FET at 75kHz with a 10V pulse at about 10% duty cycle. i could vary the duty cycle to raise or lower the buss voltage; i did it just enough to understand how it works and then stopped--didn't try to tune it for a perfect match as i had to manually change duty cycle.

On the OBC bottom board when the photodiode comes on, it pulls down pin 2 of the NJM2369 chip, which cuts off the PWM to the FET. This occurs when the internal NPN transistor is turned ON by the internal opAmp when the rail voltage goes above the desired set point and raises the voltage across the 3.9k resistor (call it R2) which is the non-inverting junction. Then when the FET is OFF, the buss voltage begins to bleed off until such time that the photodiode is no longer ON and as the R2 voltage drops below the 2.5Vref at the inverting input. When the photodiode is OFF, then the voltage at pin 2 of the NJM can rise back up to cause the PWM switching to occur again. So this device provides a feedback loop to watch and control the 16V buss.

i have been tracing the other photocouplers looking for some connection that might be causing your issue, but so far no luck.

i have looked upstream from the 16V regulator at the "loads" but haven't figured it out other than if something in the waffle plate could be pulling it down. The "ground" of the isolated 16V supply is floating with respect to the 12V battery ground. It actually connects the negative side of the C845 to the negative side of the HV DC from the AC rectifier and the negative of the 3 big electrolytic caps. The positive side connects to the rail of the push-pull drivers for the PFC switching FETS in the waffle plate. i'm thinking that maybe something else is causing the LV supplies from starting, but i'm grasping at straws...

[edit: the screenshot clipped some of the numbers, the cap voltage is 19.07 and the resistor at the top is 1Ω ] 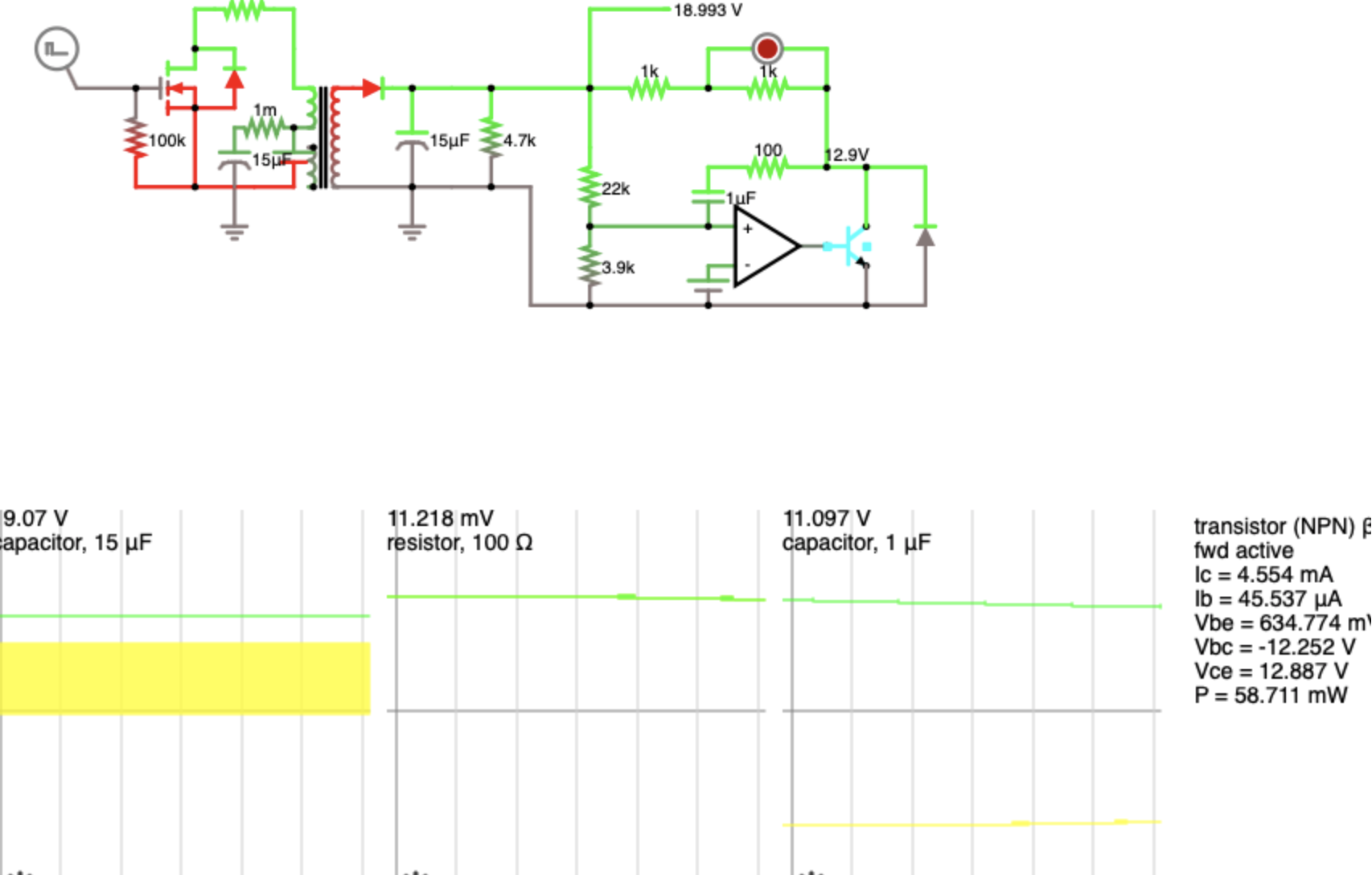 Thank you very much for your help and advice.
I started the car after flashing the memory MCU
Only recuperation does not work

That's great news that you got it running again.

By recuperation i'm thinking that you are talking about regeneration, or regen, that occurs when letting off the throttle while the car is moving, and the motor is operated as a generator to charge the pack and slow down the car.

That can be caused by worn-out tires, or mis-matched tire sizes between the front and rear. The same size ratio as when new from the OEM is required or it won't allow regen. Other factors might include a Full state of charge, cold temperature, air pressure in tires, etc. Maybe there will be a DTC stored in the EV-ECU to help find the issue.
kiev = kenny's innovative electric vehicle

Recuperation means regeneration yes. Most German language speaking EV drivers seem to prefer this word even when speaking in English.

I agree with what you've suggested - mismatched tyre sizes will severely limit regeneration, as will being fully charged. I can't off the top of my head think of a fault that would cause "no" regeneration. The closest would be a gear selector fault putting it into C mode, but that would show on the dashboard.
- Simon