Hi all, Almost two months to the day of when I towed the iMiev to the Fresno dealer it is now back in my garage. And the eventual cause of the dash light going on and the car not starting? - the control unit for the E/V motor, just as Kenny suggested. I talked to the service guy for a while before picking it up. He claims they spent 30 hours diagnosing the car.

with the 'Mitsubishi engineers', including apparently their best guy, by the name of Dave. The code was, also as Kenny thought, P1A15, (not P18A15 as I said before). Curiously, before replacing the control unit they replaced the water heater pump (??). He said that the car would not start if that pump fails. But I can't imagine it would throw the same code... ?? Lots of questions. Fortunately I only have 17,000 miles on the car and the warranty for all the electric components is 5 years/60,000 miles so I am good for another 2 years. He said this repair out of warranty would have been $10,000. And then the salesman listening tried to get me to buy a new 2016 model. So now I have a new EV charger, new water heater pump, and new EV motor control unit. Pretty much a new car without the new battery. Hopefully I'll never darken the inside of a dealer showroom again, but if I do I do not think I will be a happy camper.
Ken
silver SE

fresnomiev wrote:Hi all, Almost two months to the day of when I towed the iMiev to the Fresno dealer... the eventual cause of the dash light going on and the car not starting? - the control unit for the E/V motor, just as Kenny suggested....

Ken, glad you finally got your car back!

<Musing>Thankfully, our i-MiEVs have proven to be very reliable (knock on wood), as perusing other forums (especially Fiat 500e and BMW i3) shows lots of problems with service departments incapable of diagnosing their EVs properly. The transition from ICE motor and fuel issues to EV electronics is just the beginning of the learning curve for manufacturers and dealers. In this case, can you imagine the frustration by Mitsubishi in Japan who had spent a small fortune creating their built-in and written diagnostics, only to have these service department technicians fail to properly follow them? I wonder how the exorbitant warranty repair bill the dealer presents to Mitsu HQ will be received?</Musing>
EVs: 2 Wht/Blu SE Prem., '13 Tesla MS85, 3 156v CorbinSparrows (2 Li-ion), 24v EcoScoot(LiFePO4)
EV Conv: 156v '86 Ram PU, 144v '65 Saab 96
Hybrids: 48v1kW bike
ICE: '88 Isuzu Trooper. Mothballed: '67 Saab (orig.owner), '76 MBZ L206D RHD RV

Hey Ken, glad to hear the good news. Too bad it took so long but i guess nobody could be bothered to RTFM--read the freaking manual...

Based upon my experience with this error in my car, i would bet a big pile of bitcoins that nothing is wrong with the inverter and the problem was likely the electrical connectors inside the EMCU. Simply disconnecting and re-inserting the connectors will wipe the contact surface of any oxide layer that may have formed and the error goes away.
kiev = kenny's innovative electric vehicle

Where is the EMCU? Any exploded view available?

If you have an old unit (OBC or MCU) i would like to try to repair it.

It's behind the rear seat in the engine compartment, lay the rear seats forward and flip forward the carpet and sound mat to see a big black cover with 4 wingnuts at each corner. Undo the nuts and the cover pulls up and lays forward. The dc/dc converter and chargger is on the left, the EMCU is on the right.

Here's a picture with my new MCU (the clean and shiny box). 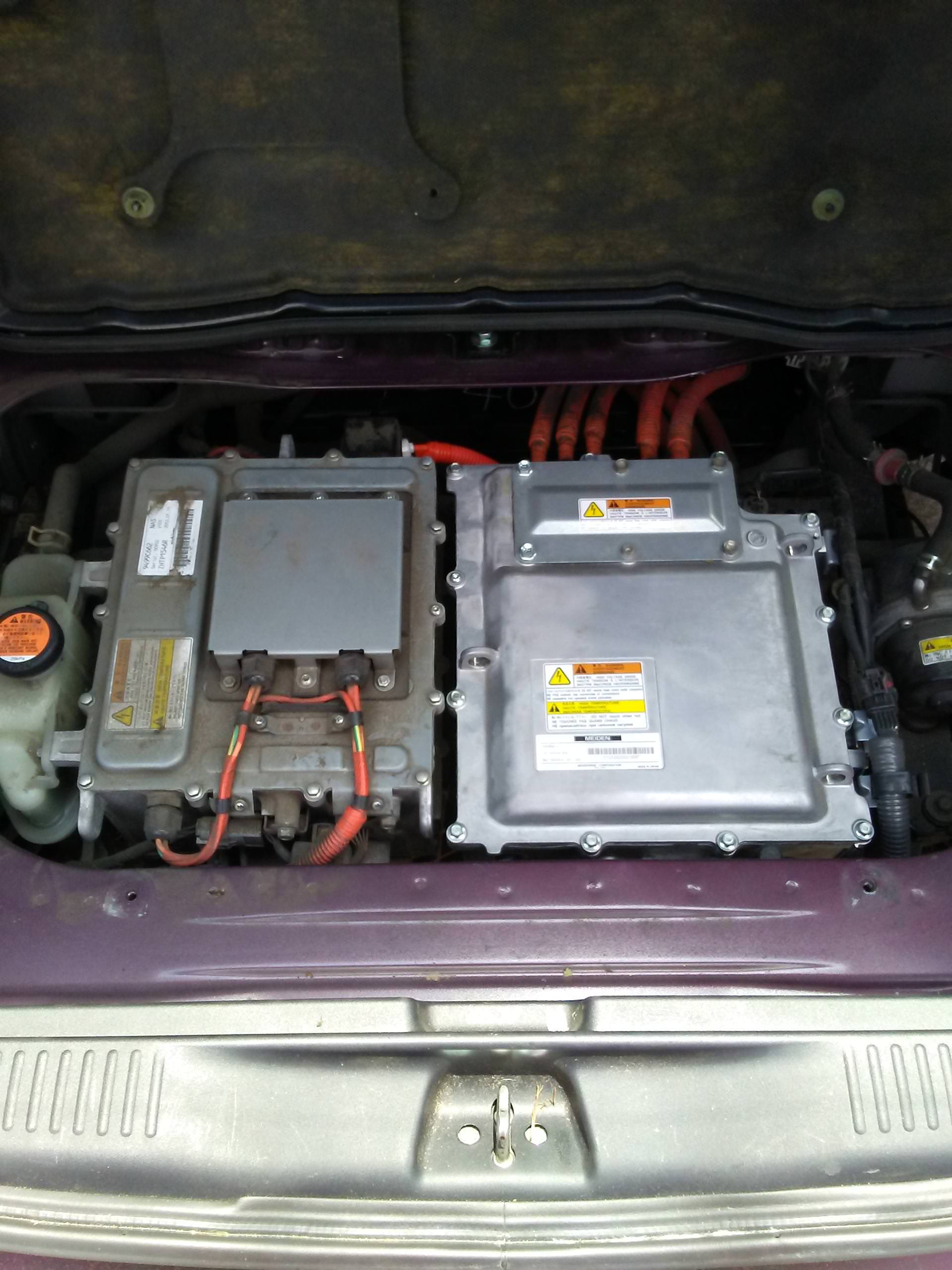 Here's the inside view showing the big capacitor. And the HV fuse for the chargger/dc-dc converter box. 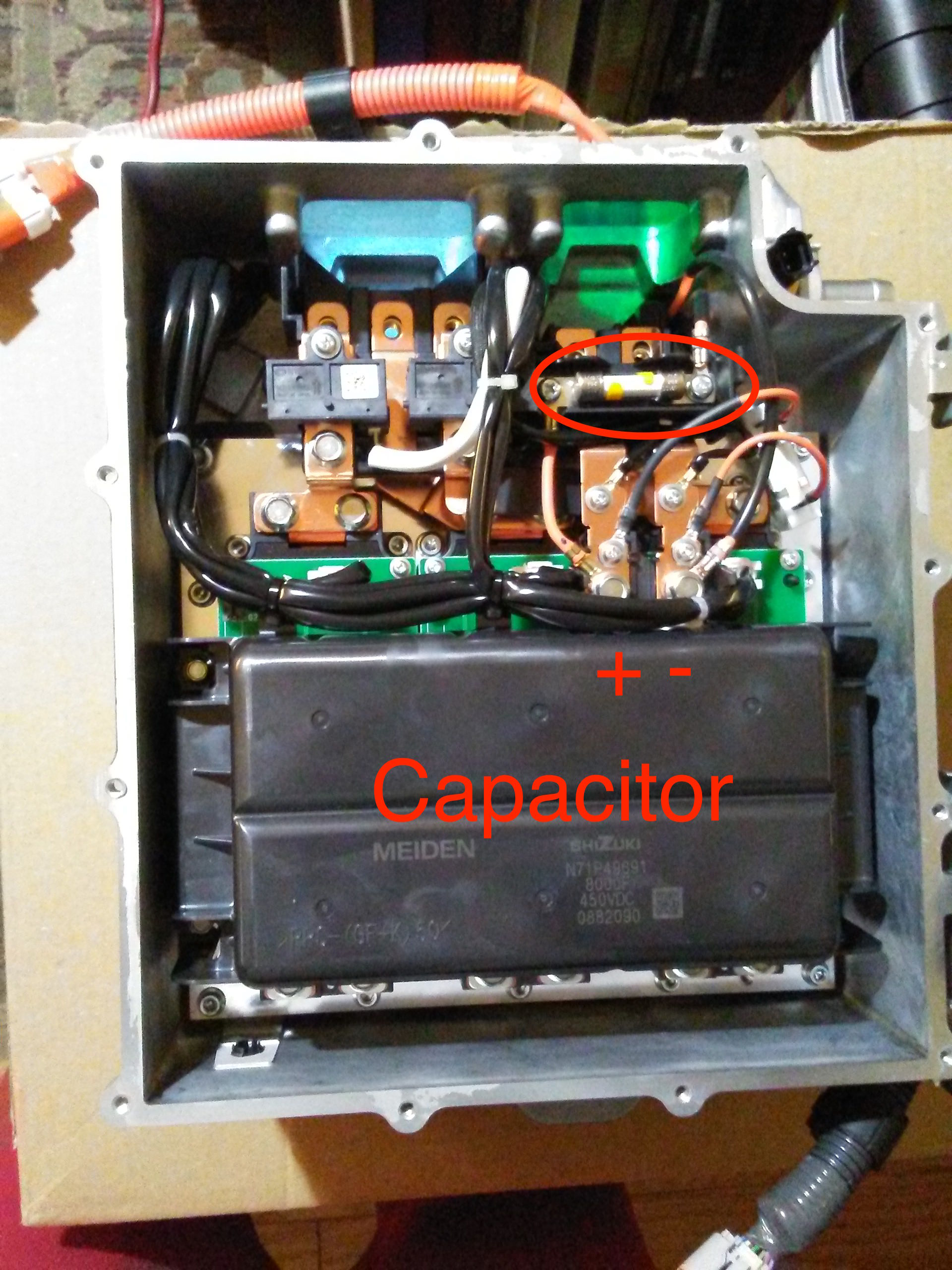 I appreciate this writeup!

More information concerning troubleshooting and the cause of this P1A15 DTC is found in a later thread here: