This was my final selection, i used the larger diameter 6kV-rated caps.

Cut slots in the walls of the doghouse plastic to route the leads to the PO and NO solder joints from the waffle plate.

Coated the inside of the doghouse with liquid electrical tape compound from home depot.

Carefully bent the leads while holding with needle nose pliers to not break the epoxy blends on the snubber caps.

Wrapped leads around the solder joints and then soldered it all together.

Coated everything with the tape compound. Waiting for it to dry, i think this will work and is a fairly easy repair from inside the OBC.

No need to remove the OBC from the car, nor the board from the box. i did not disconnect the service plug nor the 12V Aux, but i did remove the MCU fuse and disconnected the CAN buss plug from the OBC. i used a voltmeter to check and verify that there was no voltage present from the pack to the MCU during this procedure. 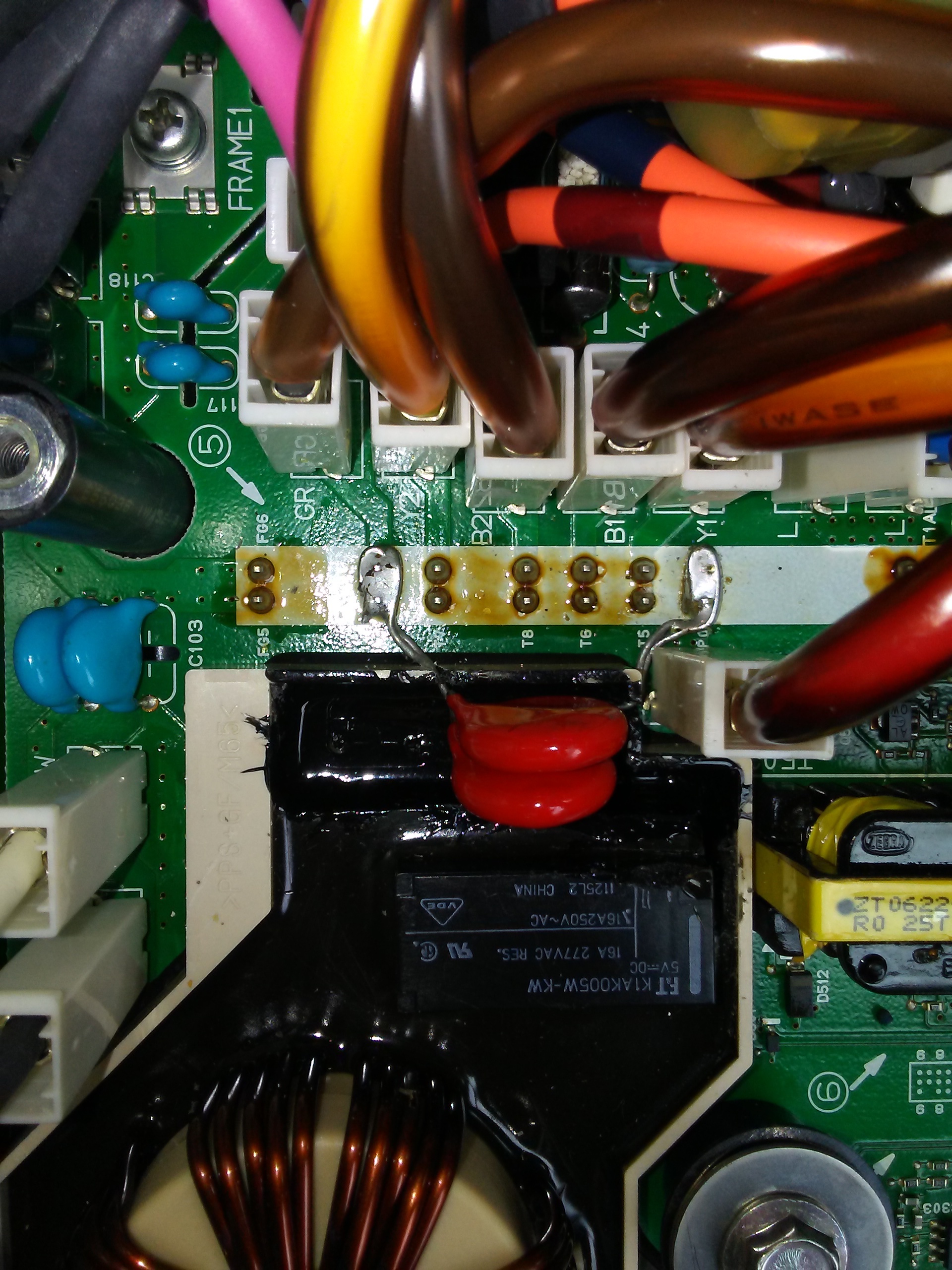 smothered and covered (wafflehouse slang) in the doghouse: 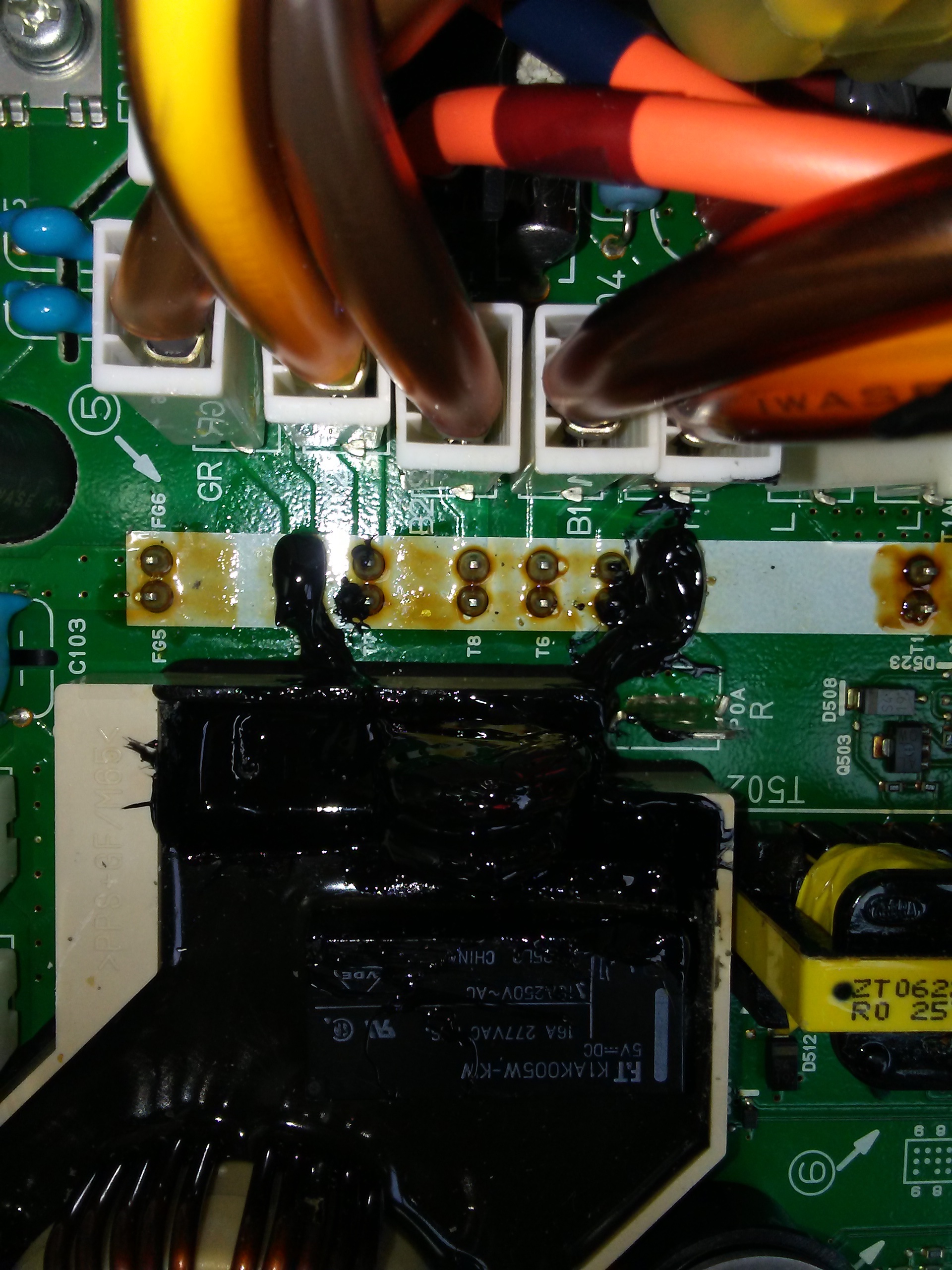 OBC and MCU Re-assembly (in "a thousand words")

After soldering in the snubber caps, here is everything opened up: 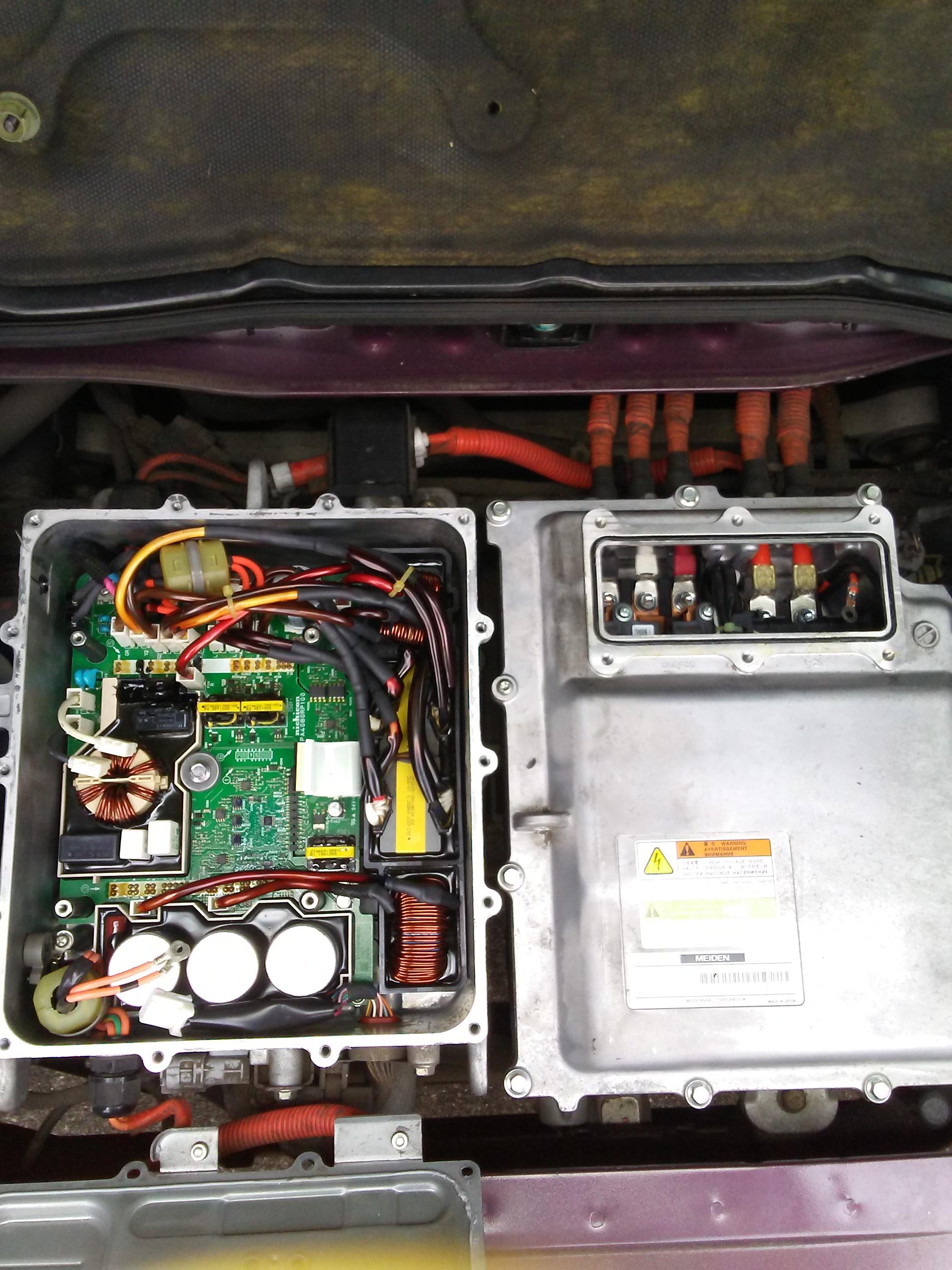 The top board must go back in: 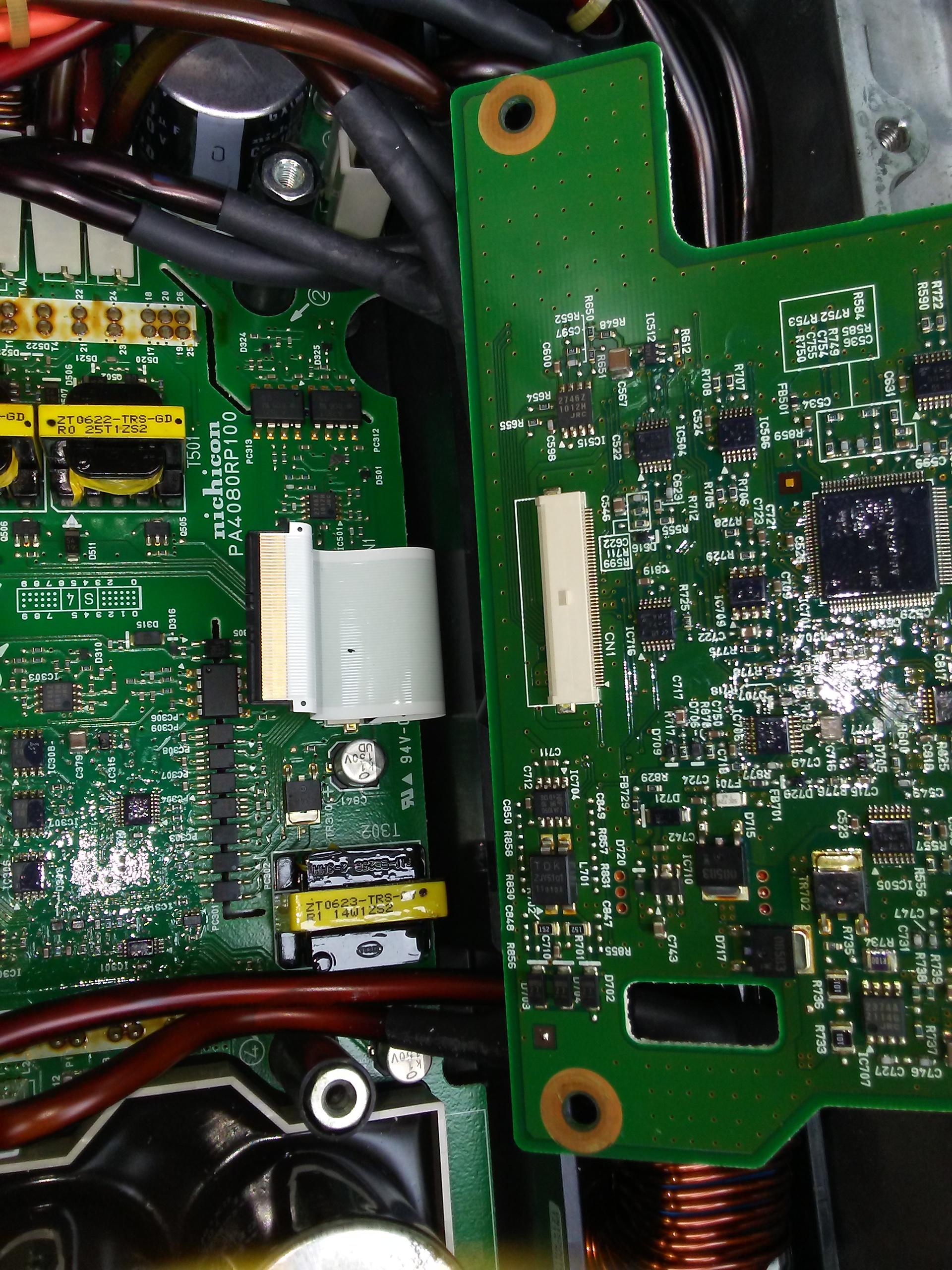 Slide the ribbon into the thin slot until it snaps: 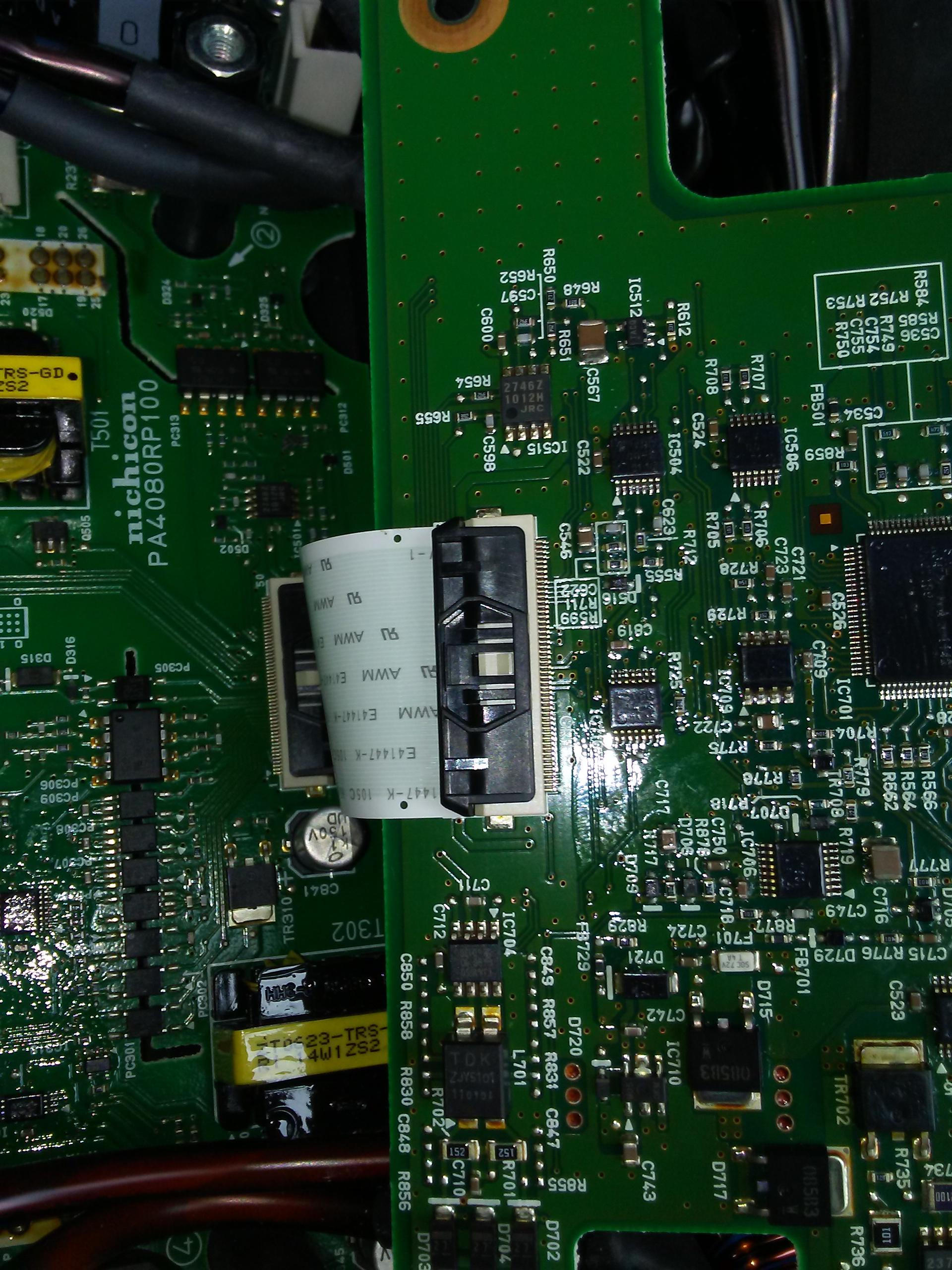 Screw in the top board, connect the tabs: 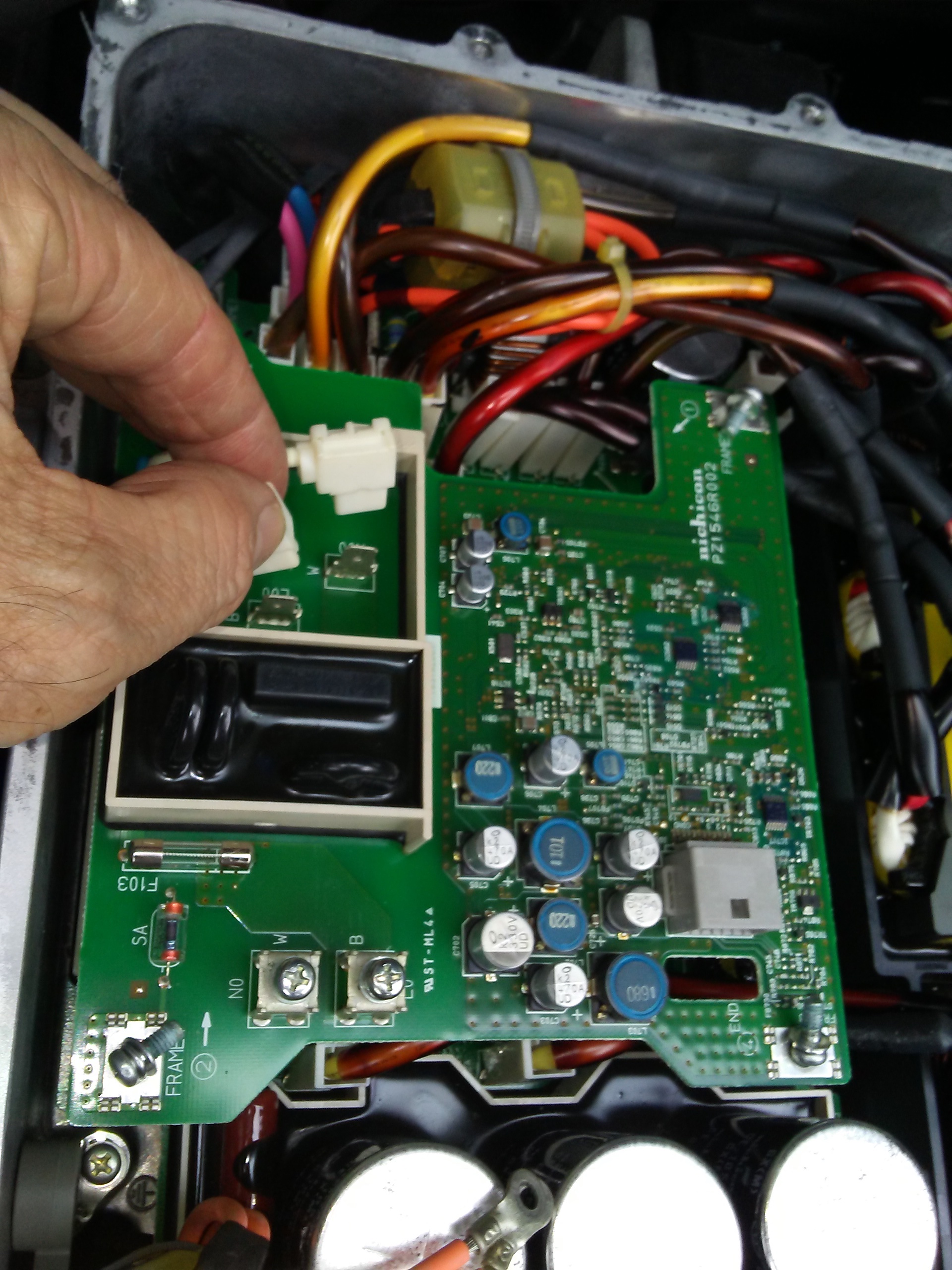 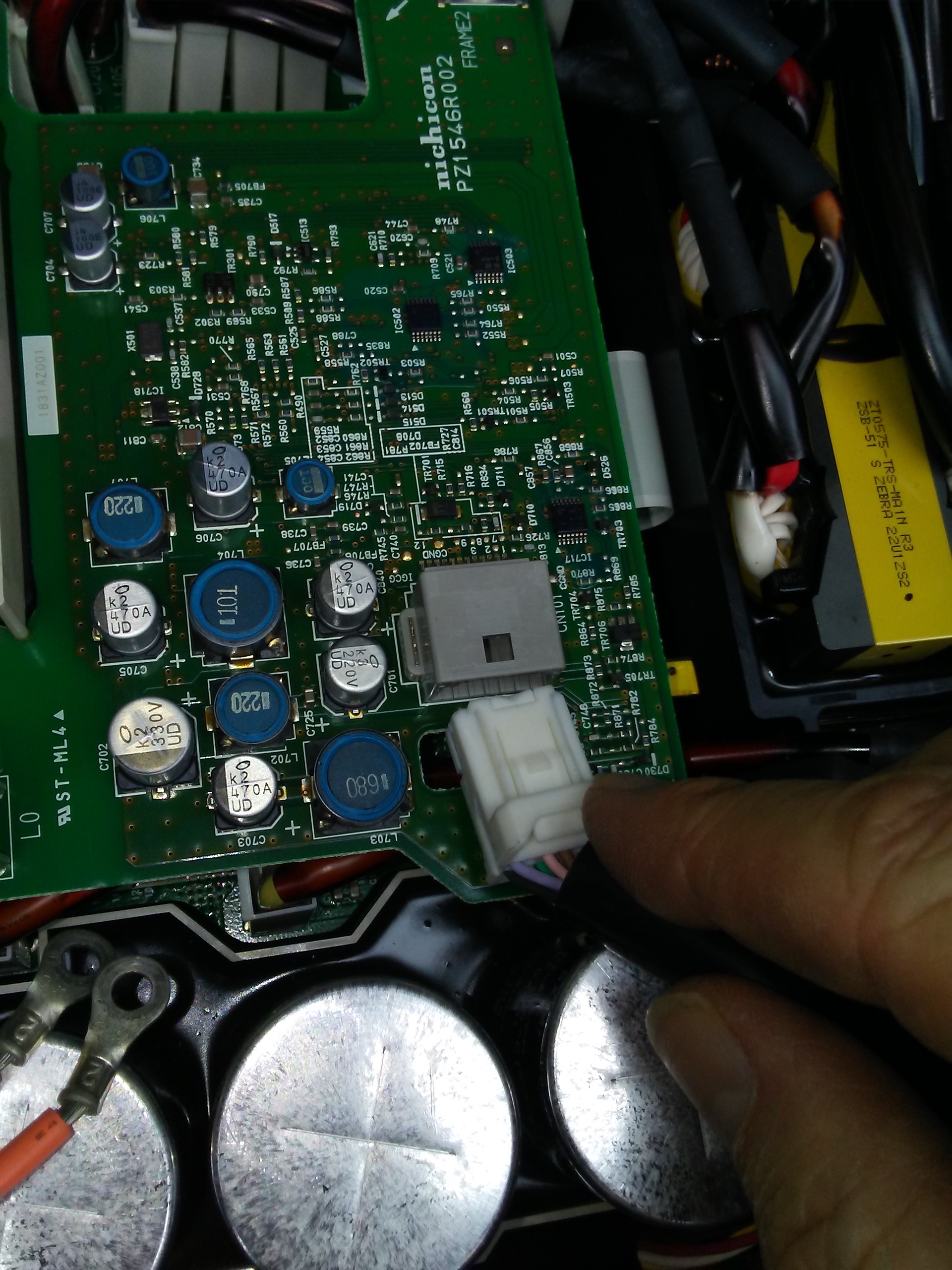 All done and ready for the cover plate: 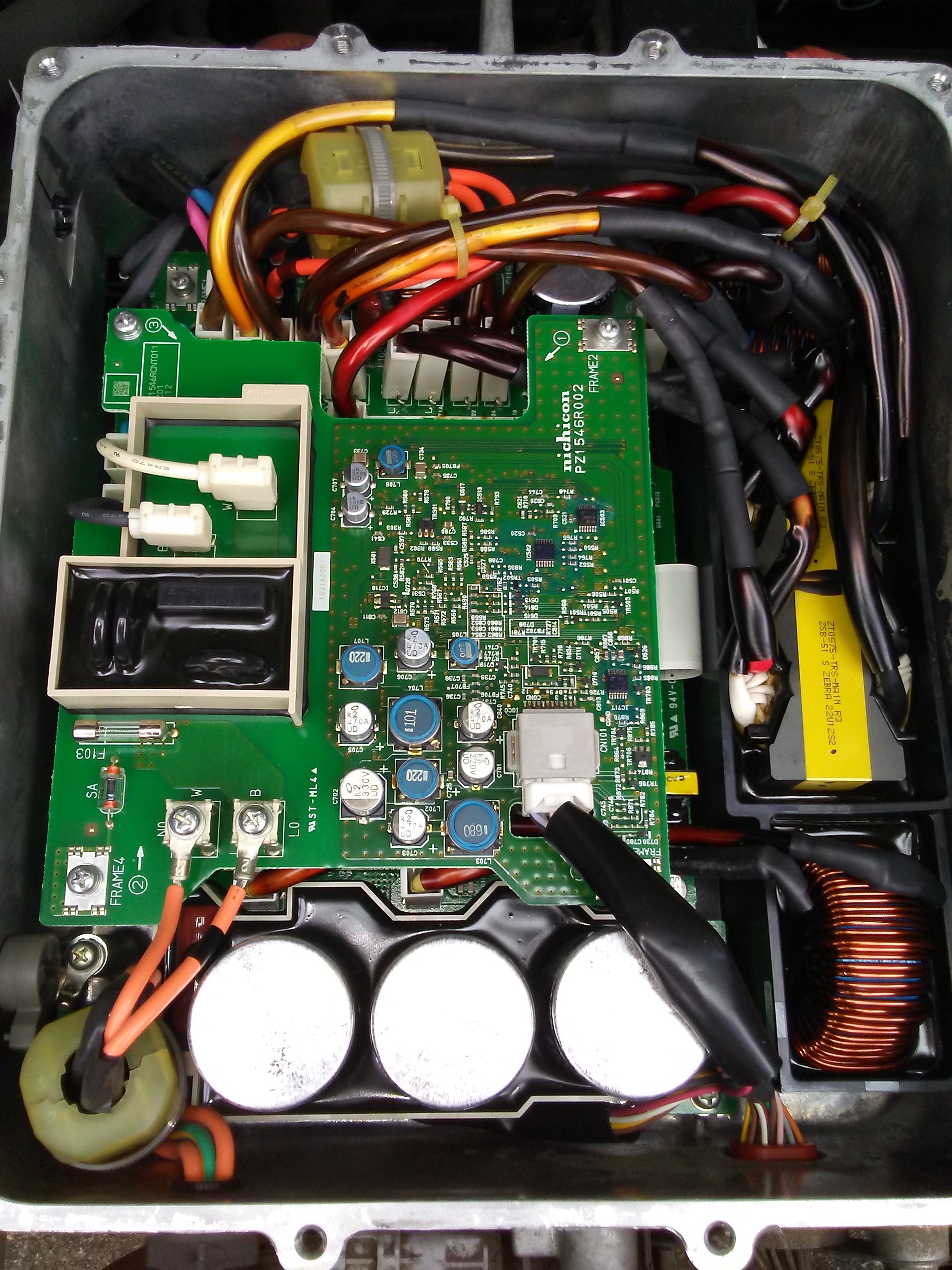 i just put a thin coat of grease along the sealing surface of the OBC and MCU access covers to seal the joint and keep out dirt and moisture.
Last edited by kiev on Mon Jun 17, 2019 2:10 am, edited 1 time in total.
kiev = kenny's innovative electric vehicle

Yikes! That's the first time I've heard of someone blowing components in the Waffle Plate™. You're a pioneer!

Ok, I'm proud to be a pioneer, but it does not feel very good here

Kiev, re the photo with the saw: nice "hacking" (almost literally

Would it not be possible to suck the solder from the holes from above with a desoldering station, and solder in the new parts from above? I guess many people don't have access to a desoldering station, but patient use of a solder sucker might do it. Or just leave the solder in the holes, and ease the new capacitors in a millimeter or two at a time, alternating sides.

I worry about clearance to other tracks with all those long leads.

re the temporary fuse: what's the thinking there? I'm really uncomfortable with a piece of wire to protect a 360 VDC circuit, even temporarily.

Especially when you've just been poking around and changing things.

Good point, i didn't have a replacement fuse so made the jumper for test purposes, but probably not a recommended practice.


So i thought it should be fixed, but no such luck.

i was able to start to READY, and drive the car, but still getting the same DTCs when trying to chargge. The fan and water pump run briefly as normal before chargging, but the start command is not sent according to monitoring with i909 scantool.

So the DCDC converter is actually working, but the EV-ECU throws a DTC that it is failed.

Maybe these are leftover DTCs that are not really being cleared by the scantool, and require a real MUT ?
kiev = kenny's innovative electric vehicle

fabele wrote:Thans for helping me.
I will check the 12 V battery and the 14.6 V in the ready state , but i think it must be in good condition, as it drives the other electic parts such as, e-windows ...
The EVSE is checked with other EV and it works fine.
The main (tracking) battery is not empty ( 25 km is available) , and the car can be driven without any problem. I can go for a ChaDemo charger and this helps to know that OBC is ok or not.
Today i opened the metal cover of the drive system and all the boxes looked nice, but one of them must be wrong. I know which is the OBC box but it is sealed nicely and i was not daring enough to open it. Before open it what to do for safety. ( inside of the box the 360 V is there).
The MCU ( the motor control unit ?) is just right on the top of the motor? If the car funtioning perfectly can this MCU 20 A fuse blown?
Opening any box what is the best way to make a perfect insulation after fixing the problem? ( if i do it wrong it may cause serius problems to the electronics).
It will not be easy to find a new capacitors if this will be the problem, (maybe e bay?)
Ferenc

Before you go too much further measure the AC voltage at the property where the EVSE is installed. (I assume your house ?)

These cars will not charge if the AC voltage is above about 247 volts, which I consider to be a design flaw. I don't know about where you are but here in the UK AC mains voltage is allowed to go as high as 252 volts and still be within specification and this will prevent the car charging.

I found this the hard way when our usually 235 volts AC went up to 249 volts for one day last year during very bad winter weather, (some sort of national grid supply problem) and the car would refuse to charge with the same symptoms you report - appearing to start charging at first including the fan running but aborting after a few seconds.

I thought the on board charger was faulty at first but after finding fault codes logged in the OBC that reported the mains AC voltage was too high I realised what was going on. I was able to start a charge by turning on the electric shower in the house to pull the AC voltage down slightly!

The following day the voltage was back to normal and the car has charged without problems since.

It's probably not your issue but it's something easy to rule out first. If your AC voltage is on the high side, try driving to a Level 2 charger at another location and trying the car there.

Another thing I would check is to make sure the gear lever is properly engaging in park mode and doesn't feel "springy". If it doesn't fully engage in park this will cause the P to flash on the dashboard when the key is on and the car also will not charge. I've had that problem before too! Solved by lubricating the linkages on the left hand side of the gearbox that go to the bowden cable for the gear lever. Also probably not your issue but worth ruling out.
- Simon

DBMandrake wrote:These cars will not charge if the AC voltage is above about 247 volts ... appearing to start charging at first including the fan running but aborting after a few seconds.

Oh, man. Now I'm wondering if my OpenEVSE didn't go bad after all, and I just had high voltage that day. Thanks.

someone who has found the solution

Hi,
perhaps this page may help