This is at the Tesla Supercharger a few blocks from my house, that has yet to open, for reasons unknown. (It was supposed to open two months ago.) 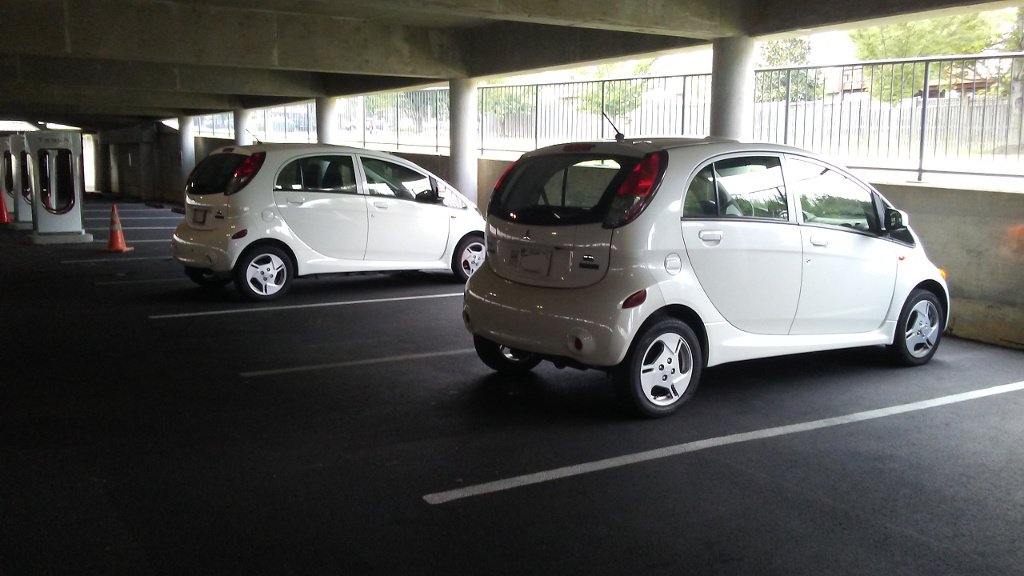 This started with a tweet by MDVolt. I drove over there today, and it was there again, so presumably it's someone who works there. It's the third i-MiEV I've seen in town, counting my own and the blue one I mentioned a few weeks ago.

wmcbrine, thank you for posting. Nice shot of the two i-MiEVs. First 'indoor' SuperCharger I've seen. Sadly, Tesla is now protruding these stations so Tesla drivers can drive in nose-first (the charging port is on the left rear of the Tesla), actually making it significantly more difficult (IMO) to maneuver the Tesla into proper position in cramped parking lots than when simply backing up, as the Tesla has nowhere near the turning radius of our i-MiEV. For example, the Cabazon SuperCharger comes to mind:
https://api.plugshare.com/view/location/58947

I've seen a lot of incompetent California Tesla drivers attempt to back into stalls, despite all the fancy sensors and great backup camera.

Wonder what's causing the delays? Personally, I suspect bureaucratic/regulatory/inspection/approvals reasons - the bane of getting anything accomplished quickly in this country (don't get me started...).

Just managed to get the first picture of the 2 Imievs today:

Aw, that's cute! Thanks for the photo. IIRC, your i-MiEVs are 11" (0.3m) shorter than the North American version.

JoeS wrote:Aw, that's cute! Thanks for the photo. IIRC, your i-MiEVs are 11" (0.3m) shorter than the North American version.

Let's see, in some jurisdictions here in California where the police have nothing better to do, I see at least three opportunities for 'illegal parking' tickets:
1. One car is parked on the wrong side of the street (yes, they do give tickets for this even on quiet deserted residential streets!)
2. Both cars are blocking the driveway (even if it is your own).

None of that stuff is illegal here thankfully...

1. Wouldn't fly as we are too short on parking already and sometimes you need to park on the other side of the street facing oncomming traffic.

Return to “iMiev Pictures and Videos”