Re: Pack Voltage versus SOC graph or table ?

CZeroOwner wrote:If the charger charged the battery to more than 4,1 volts per cell then that would speed up battery aging.

Do we have any reason to believe this happened though ?

Enough over charging to cause that amount of degradation in such a short time is more likely to result in the cells catching on fire...

Re: Pack Voltage versus SOC graph or table ?

i updated the first post to reveal that this issue has been solved. The pack was replaced but the "reset" procedure was not completed properly. He took it to the local dealer and now it's acting like a spankin' brand new pack.

Here is link to the pack removal and installation instructions, notice the second bullet of the caution banner:

and Here is link to the MUTIII "reset capacity" procedure 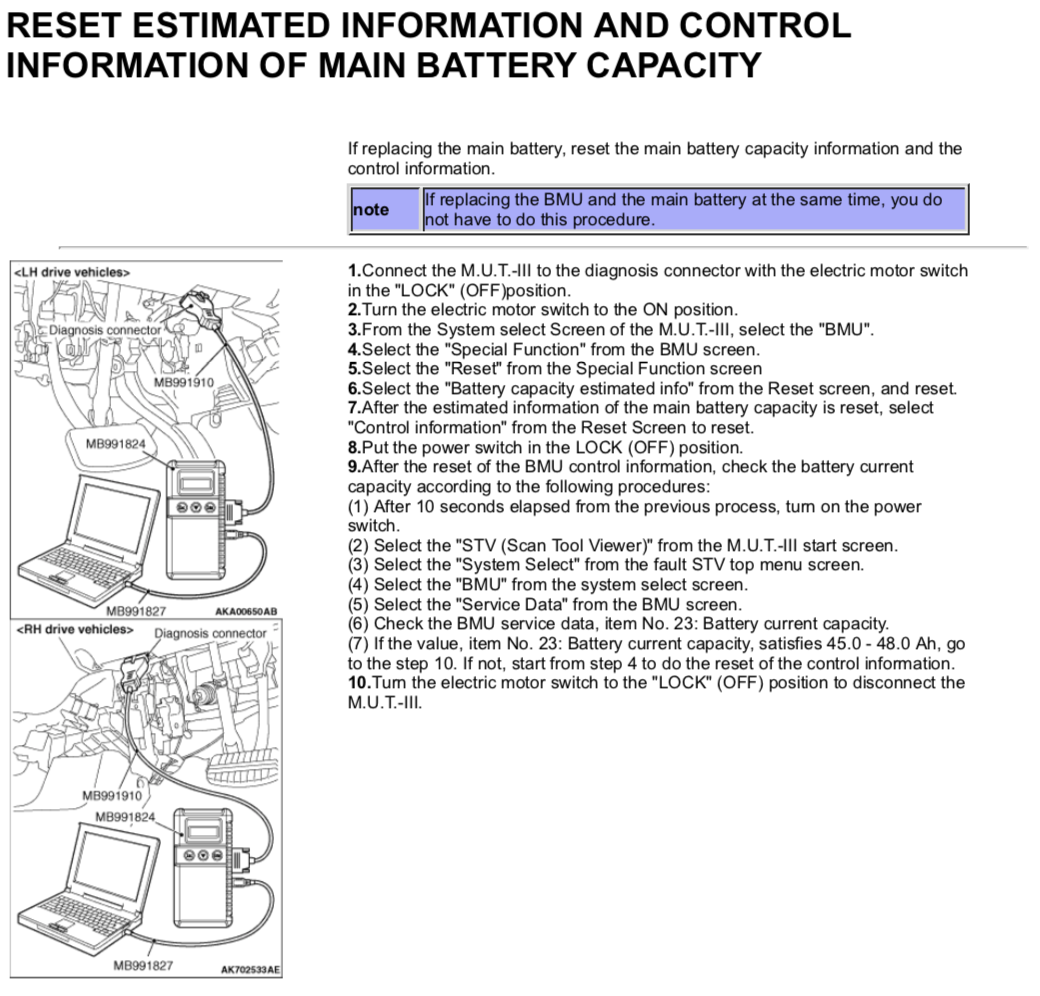 i think the capacity will never show greater than 48 Ahr even if you were to build a pack with 100 Ahr cells, at least until someone figures out how to change the "reset" value.
kiev = kenny's innovative electric vehicle

kiev wrote:i think the capacity will never show greater than 48 Ahr even if you were to build a pack with 100 Ahr cells, at least until someone figures out how to change the "reset" value.

Old post I know but linked from a new thread.

The "reset" (battery replacement) procedure does indeed just reset the capacity to a factory default of about 45.8Ah and wouldn't "see" a larger battery. But there is also the battery calibration process, at least in the PSA versions of the car using Diagbox.

This actually measures the capacity of the pack by discharging the pack until the lowest cell is about 3.75v then charging it up again and integrating the total amount of current over time. Afterwards it adjusts the Ah figure and also saves a battery calibration report to the ECU's memory (which is persistent, unless you do the battery replacement procedure, which clears it) which lists both the lowest and highest Ah capacity of the cells in the pack, which is nice.

This battery calibration process almost certainly would be able to measure a battery with higher than original capacity and utilise it - the only question is how much higher would it allow before considering that the figure was unrealistically high. In other words would it be happy to measure a 100Ah battery and adjust the figure accordingly or would it be thinking "hang on a minute.....".

The only way to know for sure short of disassembling the BMS's firmware would be to try it!

By the way the battery calibration process is supposed to be performed by the dealer during every regular major service, but on my car that was dealer serviced for the 6 years before I bought it the report had never been run! (All previous results fields were zero, until after I did my own battery calibration)

As the battery calibration process takes nearly a whole day to run and ties up their diagnostic tool for a good part of that my assumption is that the dealers are just too lazy to spend the time doing it for no return even though the service schedule says to do it.
- Simon