I also tried to find shortet caps using my multimeter but I could not find any shorts. I guess I can desolder some caps and use my LCR Meter to test them but I do not think, this should be my next option.

Also I do not think that a change in temperature lead to the functioning of the board. The temperature in my lab is stable and the soldering was done hours ago. Also the board worked not only once, I powered it up several times over two days to reassure it is working again and shortly before I wanted to take your measurements and put it in the car, it died. I did not even move it since the last time. It is so strange to me.

After quite some time I finally have time to take a last approach in repairing the OBC. I desoldered TR310 and the K3484 is working within its specs. Before desoldering the passive components one by one and checking them, is there something else I should try?

I took some high quality pictures of the board with enough light to see every trace, I hope this might be useful.

There is an oscillator for IC702 determined by an R and C on pin 7. i'm guessing that it is not oscillating for some reason, maybe it's the passive parts, or maybe it is defective. It is listed as NJM2369 for datasheet, but marked 2369Z on the chip. Here is a typical application diagram from the datasheet. This is driving the gate of TR310, so unless it is oscillating and switching, then the transformer won't get flashed, and so no secondary created. 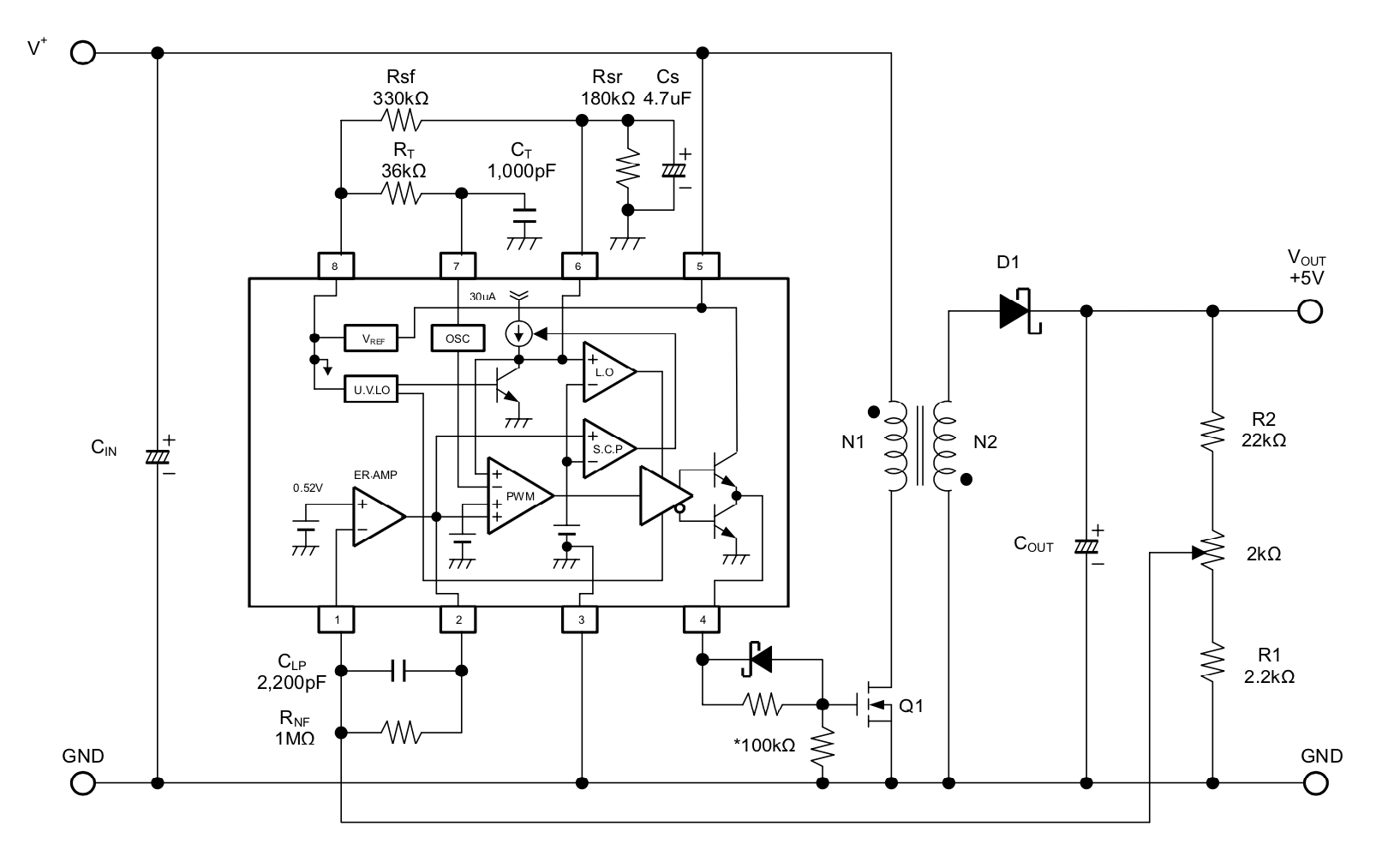 i'll take a picture of my trace notes and post later. If i have time this weekend i will draw it up.
kiev = kenny's innovative electric vehicle

I just meaured all pins with the oscilloscope and pin 7 is switching (picture) to some degree. I also desoldered all parts seen in the picture and checked them, all resistors are fine and I added the measurement values of the caps to the picture. 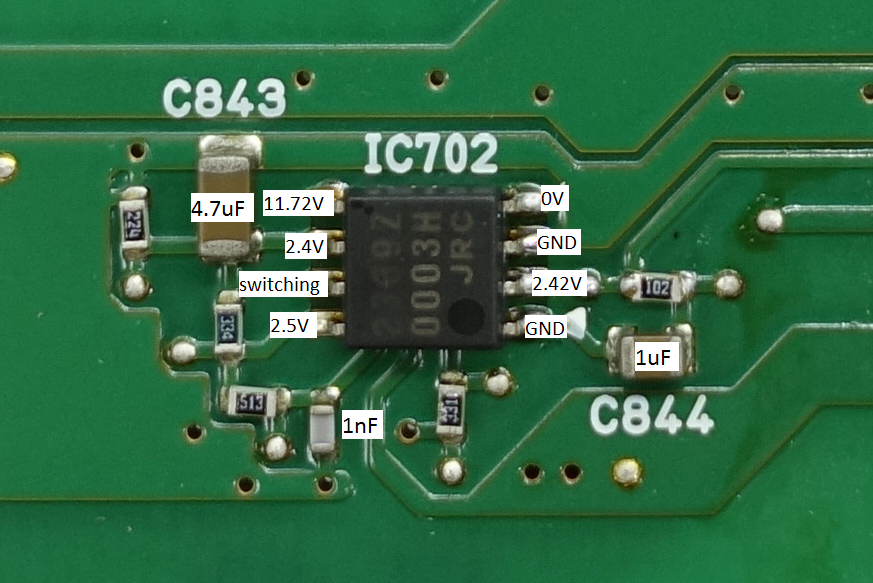 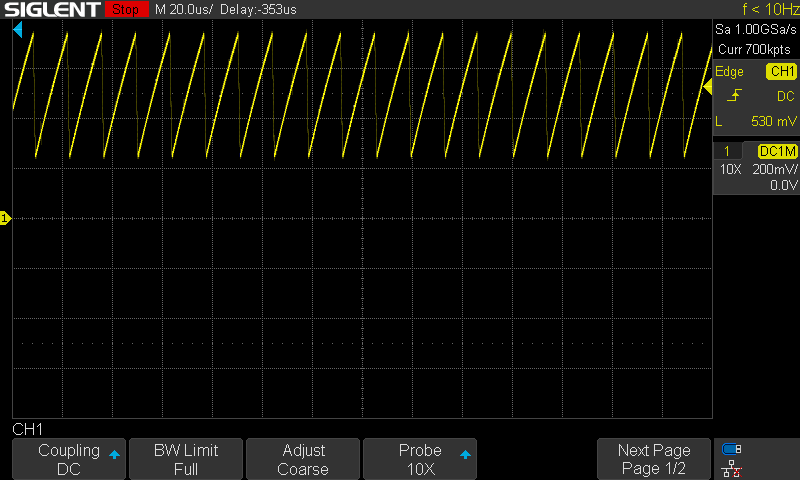 [ Edit: this is nonsense, in light of Kenny's later post. ]

My wild guess: TR310 is shorted gate to source. If removing that transistor did not produce drive at pin 4, then the short circuit blew the upper driver transistor in IC702. Or IC702 failed all on its own. With zero volts on pin 1, IC702 should be driving the transistor as hard as possible, and it's not doing that. I'm suspicious about the low voltage on pin 2, but it's possible that this part of the circuit runs on Vref, in which case it's believable.
Last edited by coulomb on Sat Sep 12, 2020 4:12 pm, edited 1 time in total.

Is there a good solder joint to the ground side of the 220k resistor next to C843 ? The voltage at pin 6 CS is too high, it should be about 1 volt according to the voltage divider. This latches the chip into LockOut mode for short circuit protection, shutting off the output.

The oscillator is running about 70kHz, which is right in line with the datasheet, so that seems good.

The FB on pin 2 is at the internal rail (~2.5V) because there is no pin 1 Input, the threshold for turn ON is 0.55V on pin 1(IN). The overdrive at pin 2 also causes the PWM and Short Circuit Protection to go hi and shut off the output.

Trace notes of the transformer circuits and the feedback and Input(-) from IC318 back to IC702. Sorry they are so rough. 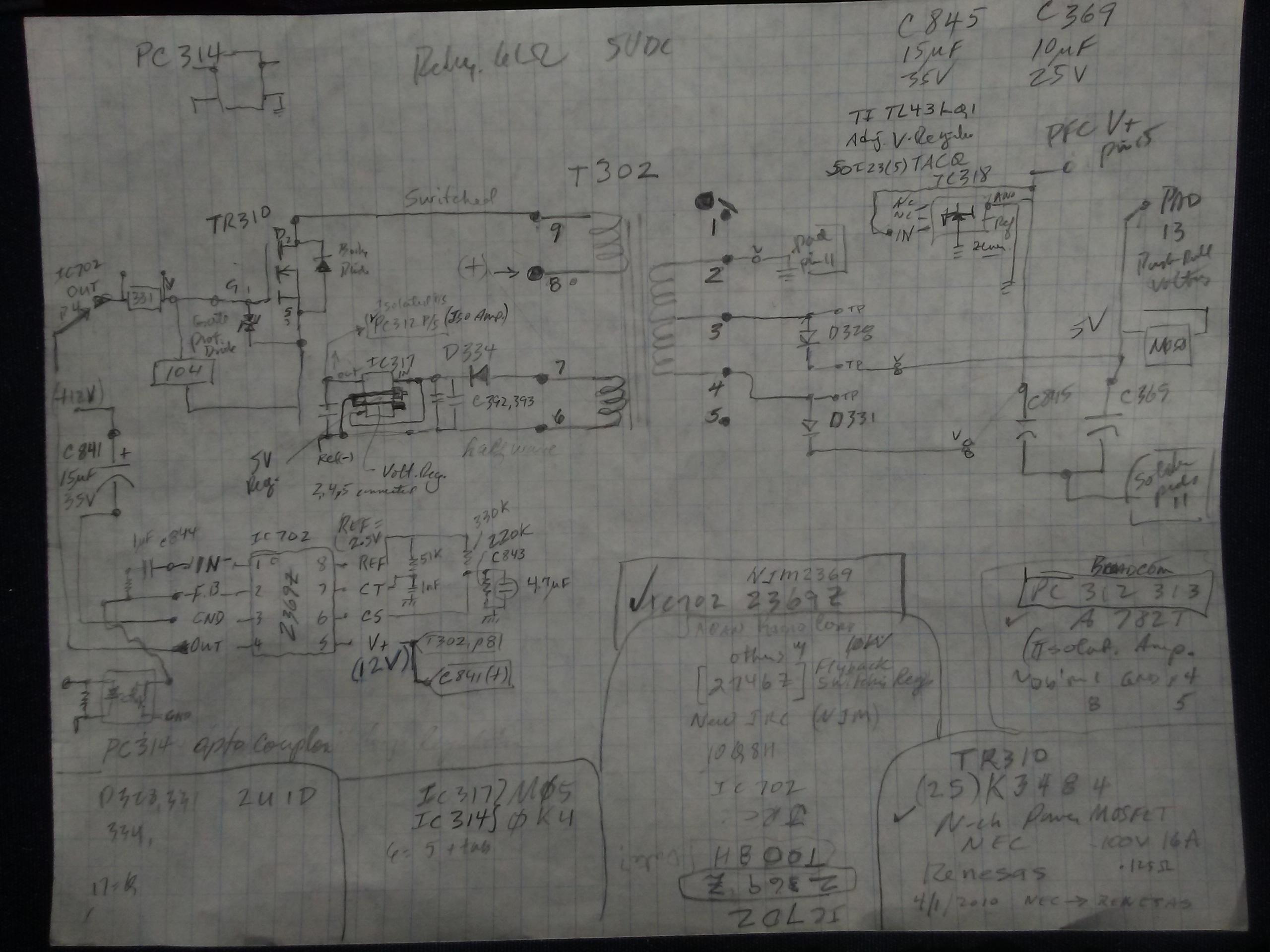 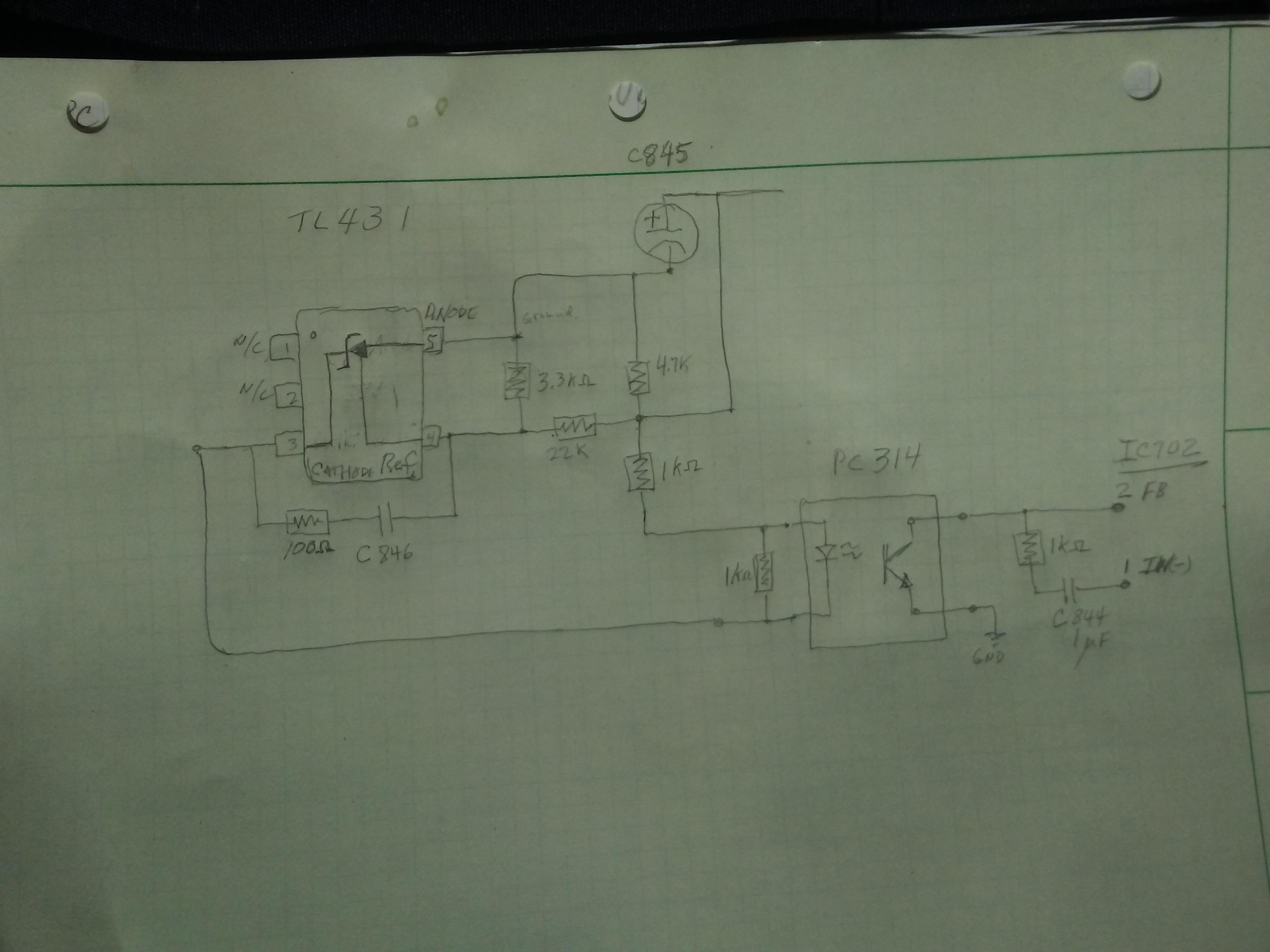 @coulomb
TR310 is fine. I desoldered the MOSFET and tested it in a test circuit and it is switching normally.

Awesome work here on your schematics! But it really seems that the 2.4V are coming from IC702.

The voltage on pin 6 seems to be from the internal 30uA current source, which i think gets turned on when the short circuit protection gets triggered; the external components are only pulling 11 uA across the 220k and that gives the 2.4V. This voltage is also one of the inputs to the PWM op amp.

The 2.5 volts on pin 2 seems to be the output of the error op amp due to the 0.52 internal reference on the (+) input and nothing on the inverting input from pin 1. i have an idea for a test, briefly touch a resistor (eg 100k - 1M) between pins 1 and 2 to see if it causes the chip to start switching.

The voltage on pin 2 is causing the PWM to stay locked high and also sets the short circuit protection hi which latches the chip and stops the output.

kiev wrote:The voltage on pin 6 seems to be from the internal 30uA current source, which i think gets turned on when the short circuit protection gets triggered;

Yes. The long time constant of the Rs and C on pin 6 (≈ 0.5 sec) seems to be the short circuit protection. The logic seems to be: if there is no output for 500 ms, something is wrong, likely a short circuit (either at the IC702 output or in the transistor it drives), so best to shut it off and prevent either IC failure or meltdown of other components like the "transformer" (really a multi-winding inductor). So whenever there is a failure in this circuit, you would find it in this state: 0 V in pin 1, ≈2.5 V on pin 2, ≈2.5 V on pin 6, and no drive (0 V) on pin 4. So see the action, you need to trigger the DSO at power-up, or as Kenny suggests below, force a "reset" with a resistor or similar and capture voltages on the DSO.

The 2.5 volts on pin 2 seems to be the output of the error op amp due to the 0.52 internal reference on the (+) input and nothing on the inverting input from pin 1. i have an idea for a test, briefly touch a resistor (eg 100k - 1M) between pins 1 and 2 to see if it causes the chip to start switching.

I don't believe that will work; the short circuit protection is acting because something is wrong elsewhere. But the idea of a "reset" is good. My suggestion is put one channel of the DSO on pin 6, put the DSO in one-shot mode and trigger on that channel at about 1 V, low-going edge. Put the other channel on whatever you want to test, perhaps start with the output, pin 4. Use a clip lead or whatever to short the 4.7 μF capacitor on pin 6; this should trigger the DSO, and you should capture some 300 μs of activity. That should allow you to figure out what is happening in the initial half second before the short circuit protection kicks in. It would be best to have all the parts in place, so that you'll be able to see why no feedback gets to pin 1 (if that's the case). It might turn out for example that there is too much load on one of the "transformer" outputs (so check those as well). Pin 1 would be the next place to capture from, and work back from there.

The voltage on pin 2 is causing the PWM to stay locked high and also sets the short circuit protection hi which latches the chip and stops the output.

I believe it's the continued high voltage at pin 2 (higher than the "battery" connected to the PWM op-amp) that allows pin 6 to ramp up to higher than the rightmost "battery" that is the problem. When pin 2 occasionally goes low, it should stop the 30 μA current source from ramping up the voltage at pin 6, which should be enough to keep pin 6 low enough to stop the short circuit protection.

i have to agree with Mike's excellent analysis of this chip, and i like his reset method of shorting across the 4.7uF cap, that is a great idea. i was puzzled about the meaning of "CS" for pin 6 until coulomb described the logic.

The history of this circuit having failed, then working again after checking and re-soldering the passives, then failing again, is obviously an anomaly that must be solved. It's hard to know if the NJM2369 chip is defective or if some other factor is the culprit, but it would be nice to know what is failed before buying a bunch of parts.

Diode D331 rectifies the secondary on pin 4 of Transformer 302 to create the ~16VDC supply stored in C845 and used by the TL431 regulator, IC318. The output of IC318 is used to turn ON the LED in PC314, TLP127, which has a darlington phototransistor output that shorts out the FB pin 2 and provides the AC input for pin 1.

Maybe the D331 or the photocoupler is not working? i measured a diode drop of 0.5 volts both directions across pins 1 and 2 for the input LED, but there is a 1k resistor in parallel. The datasheet indicates a 1.15V forward voltage for the LED. If you haven't already, then you could test it on the bench to see if the LED is turning on and the output gets shorted. Also check D331; and C845 is it defective/shorted at high frequency?
kiev = kenny's innovative electric vehicle
Post Reply
Load more posts
621 posts