I tested the relay this evening using an external supply, and it pulled in as expected with 5v across the coil. Contacts have no significant resistance when relay is on (meter showed 0.01 ohms) and are disconnected when the coil is unpowered. I'll replace it anyway, but on the surface the relay appears ok.

Another busy weekend of MIEV repair here, after far too long a wait for parts. The tombstone form factor of the resistor is quite unusual, and I was unable to find a 33 ohm one anywhere, so I decided to go higher rather than lower and substituted a 47 ohm resistor. It, and a replacement relay arrived late last week, so this weekend I got into the repair itself.
I got myself a vacuum desoldering station, as I wanted to get the pair of boards completely apart and also was a little frightened of damaging the board with excessive heating. This proved to work fairly well - much easier than solder wick, or the clapped out station I had access to at work.

Removal of the relay and resistor was officially Hard Work. They were effectively stuck down underneath by the potting compound, as well as being soldered in on heavy tracks, and it took lots of applications of the desolderer to get the pins mostly clear. I used a fine scalpel to cut under the relay once I'd desoldered the pins, and that then let me lift it. Once removed, and after a bit of board and pad clean-up, fitting the new components and reassembling the module was fairly straightforward.

Plugged it back into the car, put things mostly back together, triple checked my wiring, crossed fingers and toes, and then applied mains.

The joy of hearing the charging process start was rapidly dissipated when I saw smoke rising from the charger - I cut the power hurriedly.

I then disassembled it all again. The resistor is once again open circuit, so lots of current must be being drawn right from power on. There is no sign of any other damage on the top board, but there's a smoking crack in the potted module underneath. The sad/annoying part of this story is that when I looked back on the photo I took of the module and mezzanine board from when I had it apart the first time the crack was already there - I'd overlooked it because I was too focussed on the resistor failure on the top board. Below is the original photo - the problem crack is in the middle of the four epoxy squares at the top left. The blackening is a little more obvious now. 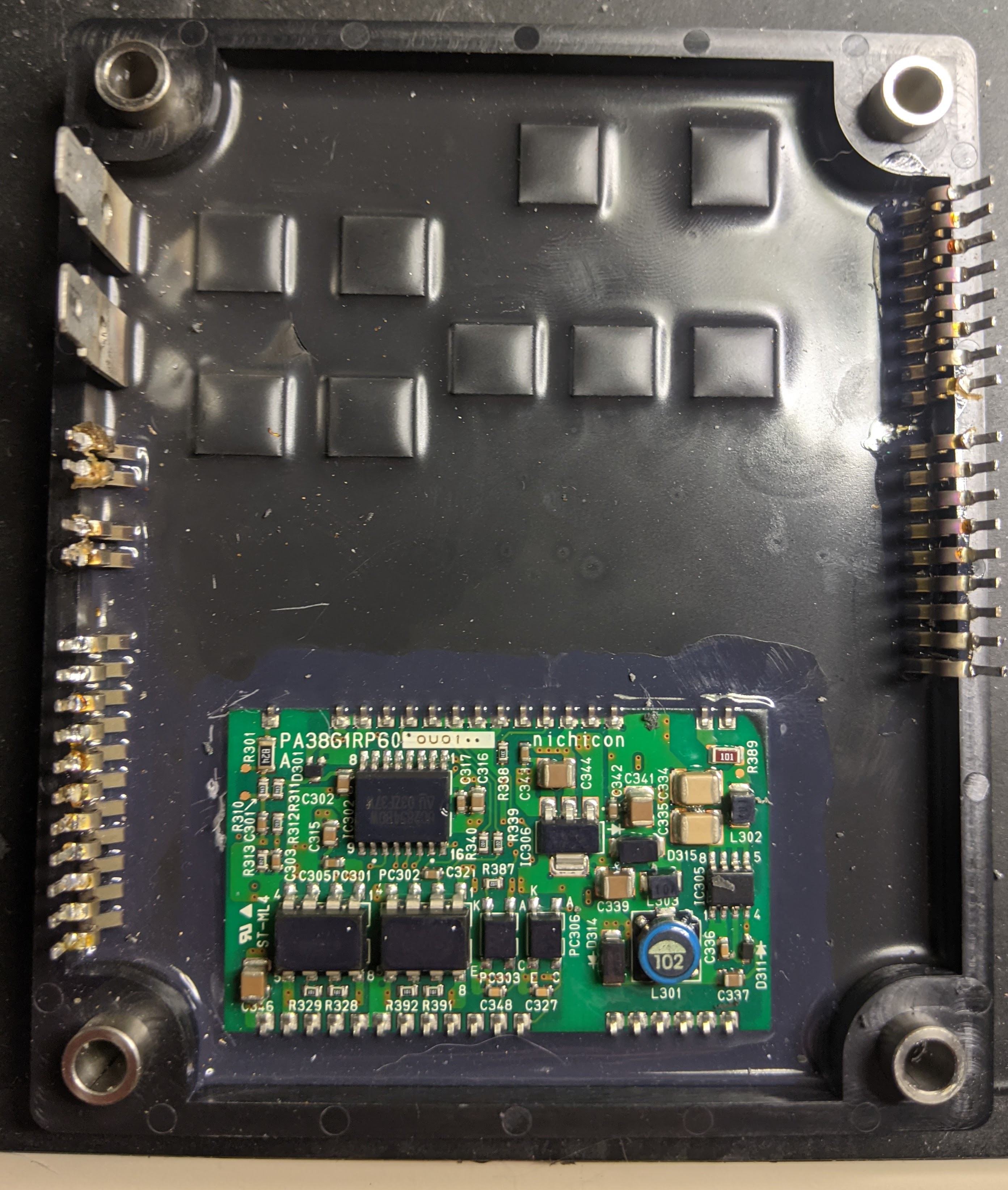 So now it all gets a little more complicated - it looks like I'll be doing some epoxy mining. I'm wondering if it is worth trying to get an X-ray of the module first to try and get an idea of what's happening there.

On the positive side, at least I now know why there was a smell of electronic death when I originally opened up the charrger. The resistors seem to fail without emitting smoke, so in hindsight it was obvious there was still a mystery to be solved. I just forgot about it in the excitement of finding one problem and fixing it.

Sorry to hear of the set back.

Looks like the AC rectifier diode section, likely a shorted diode is what caused the resistor to blow in the first place.

The soft black coating around the relay is easy to remove with a wooden tool, handmade scrapper from a bamboo chopstick. The black epoxy coating on the waffle plates is very hard to remove--i haven't figured out how to do it, but hopefully there is a way to get thru and replace the diodes.
kiev = kenny's innovative electric vehicle

kiev wrote:... but hopefully there is a way to get thru and replace the diodes.

Or perhaps replace the diodes with a suitably rated and somehow heatsunk bridge rectifier. Assuming also of course that the shorted diode doesn't prevent the rest of it from working.

Looks like it might be a capacitor? One of the components in the middle of the bridge looks a little hollow, and that's where the crack and smoke are located. 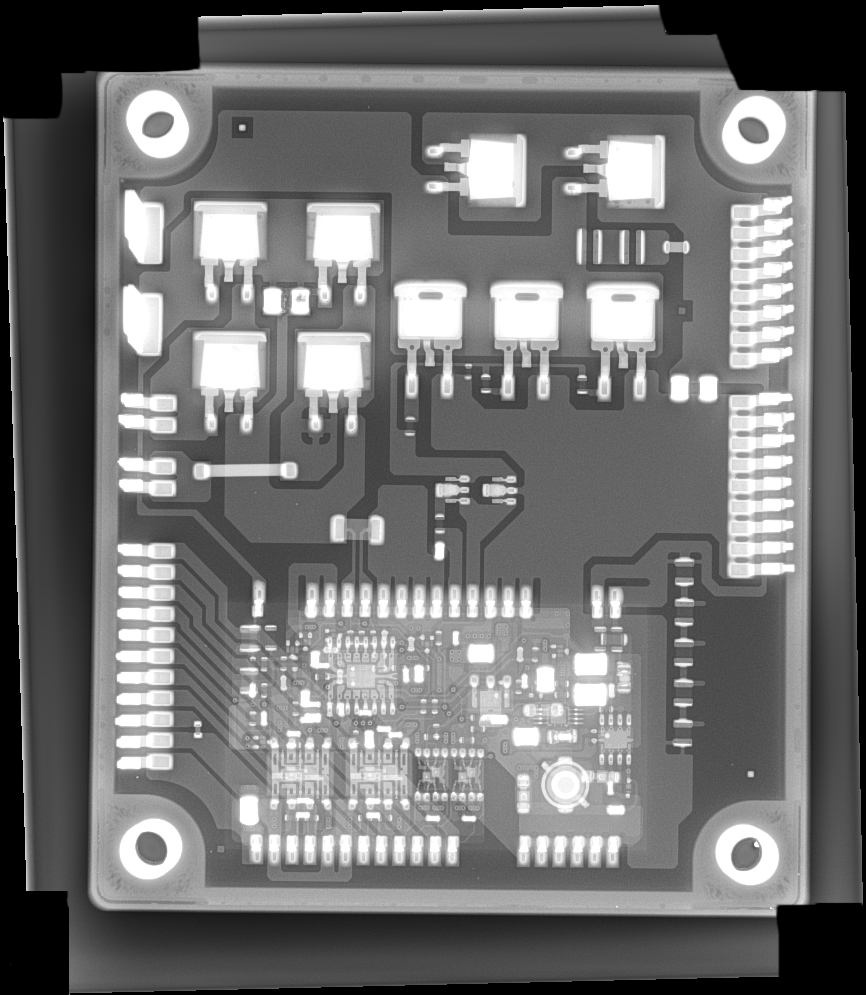 Awesome--that is a great image. Here's a markup of what it looks to me, you might be able to drill down to that capacitor to get to the bottom board for repairs. 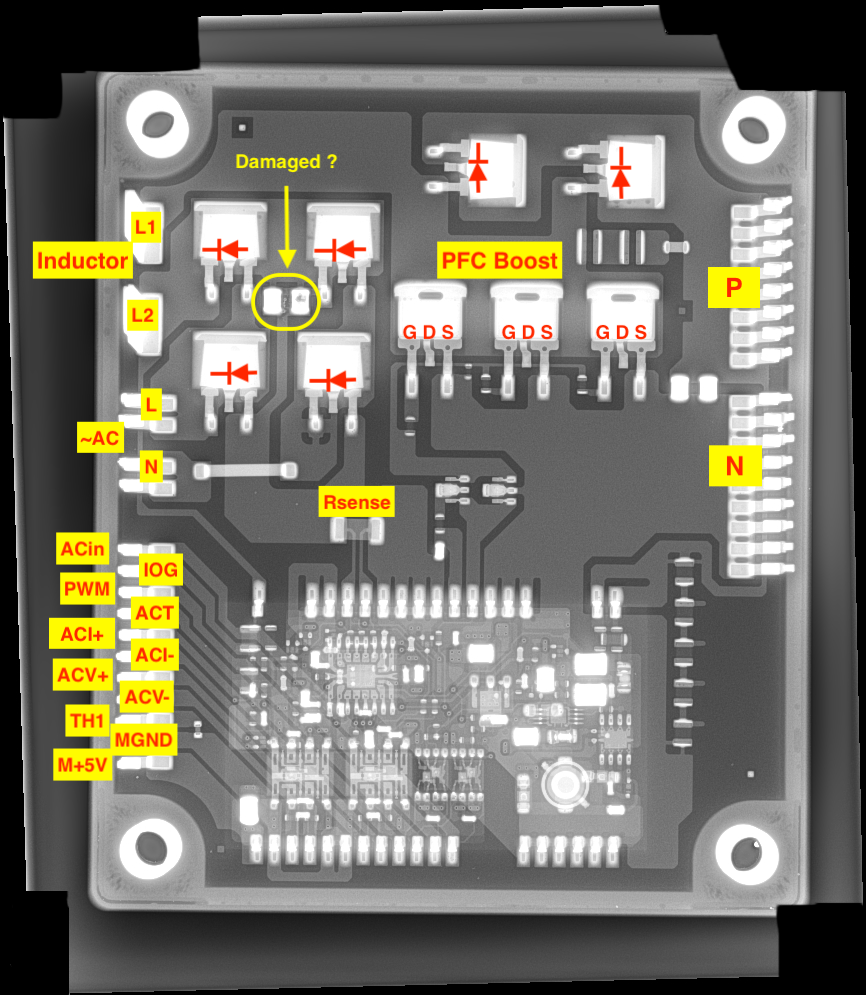 Kenny, thanks very much for the markup of the x-ray image. I had it under way myself but you've done a much nicer job. Based on your schematic from the later units on page 1 it looks to me like the possibly smoked capacitor performs the same function as the 1uF (105K) device that is external to the waffle board on the later units. I'd guess that mine has a couple of 470nF high voltage surface mount caps in parallel.

I was away for the weekend (was a Monday holiday here in Perth), but I expect to be starting my epoxy mining over the next couple of evenings - initially down into the capacitor area between the bridge diodes and then widening it out as needed. I'll be working slowly and carefully with plenty of ventilation - as there are not many spares around for this module, and none at all for me.

The diodes and fets look okay, so maybe just removing the shorted component would allow the system to start again. Of course it's not so easy putting it all back together just for a quick check, but it might be worth it.

May be a crazy idea: Just put the bare minimum solder on the waffle joints in case you have to remove it again, but if it works then you can add a bit of solder. i wouldn't even bolt it all back in, just set in place for a test. If it starts charging, then you can quickly stop the test with the release trigger and do a thorough reassembly.
kiev = kenny's innovative electric vehicle

First evening of mining complete. I've struck board, and dug out fair amount of carbonised epoxy and/or capacitor in the process. 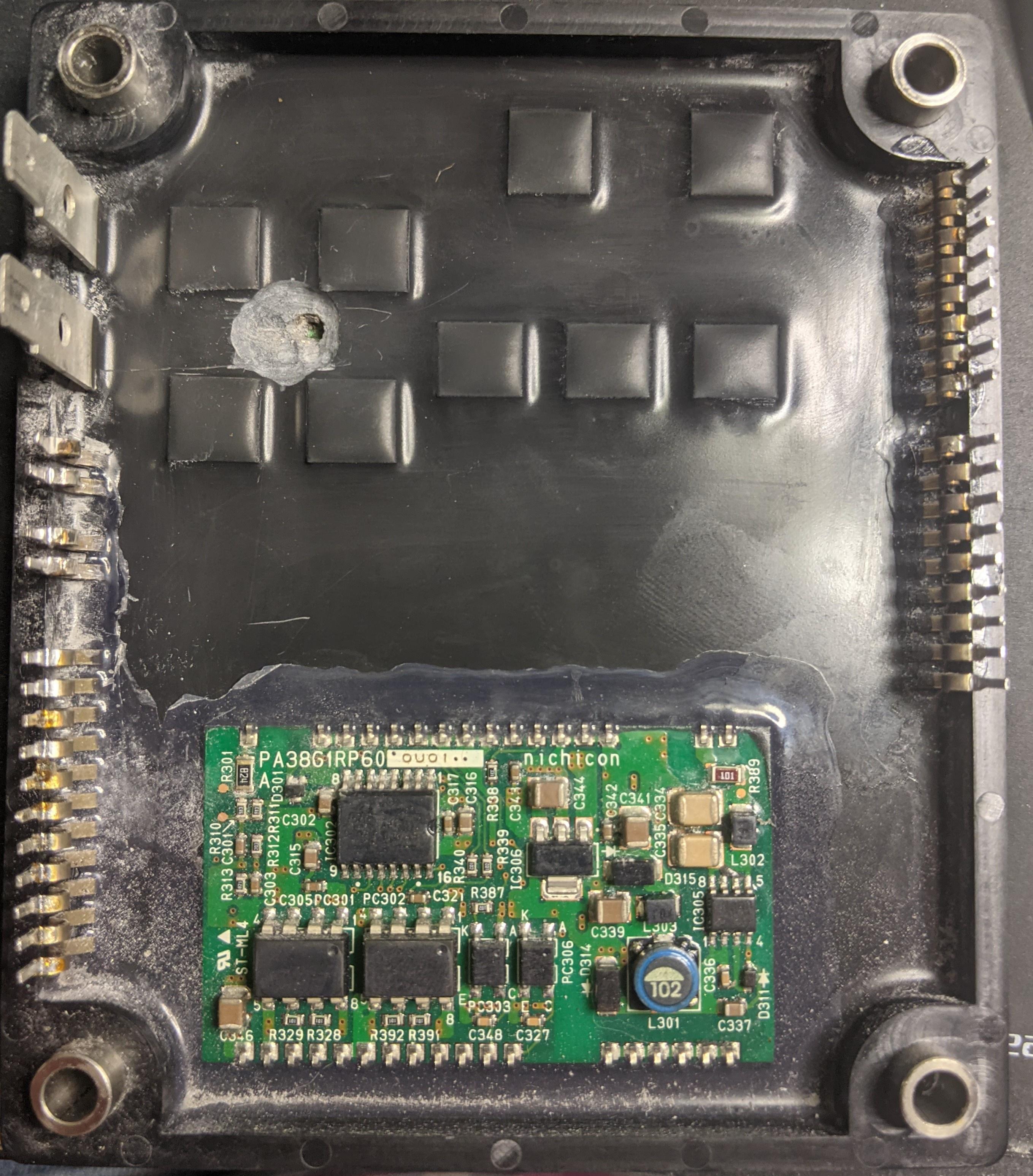 Heres a close up of the pit. 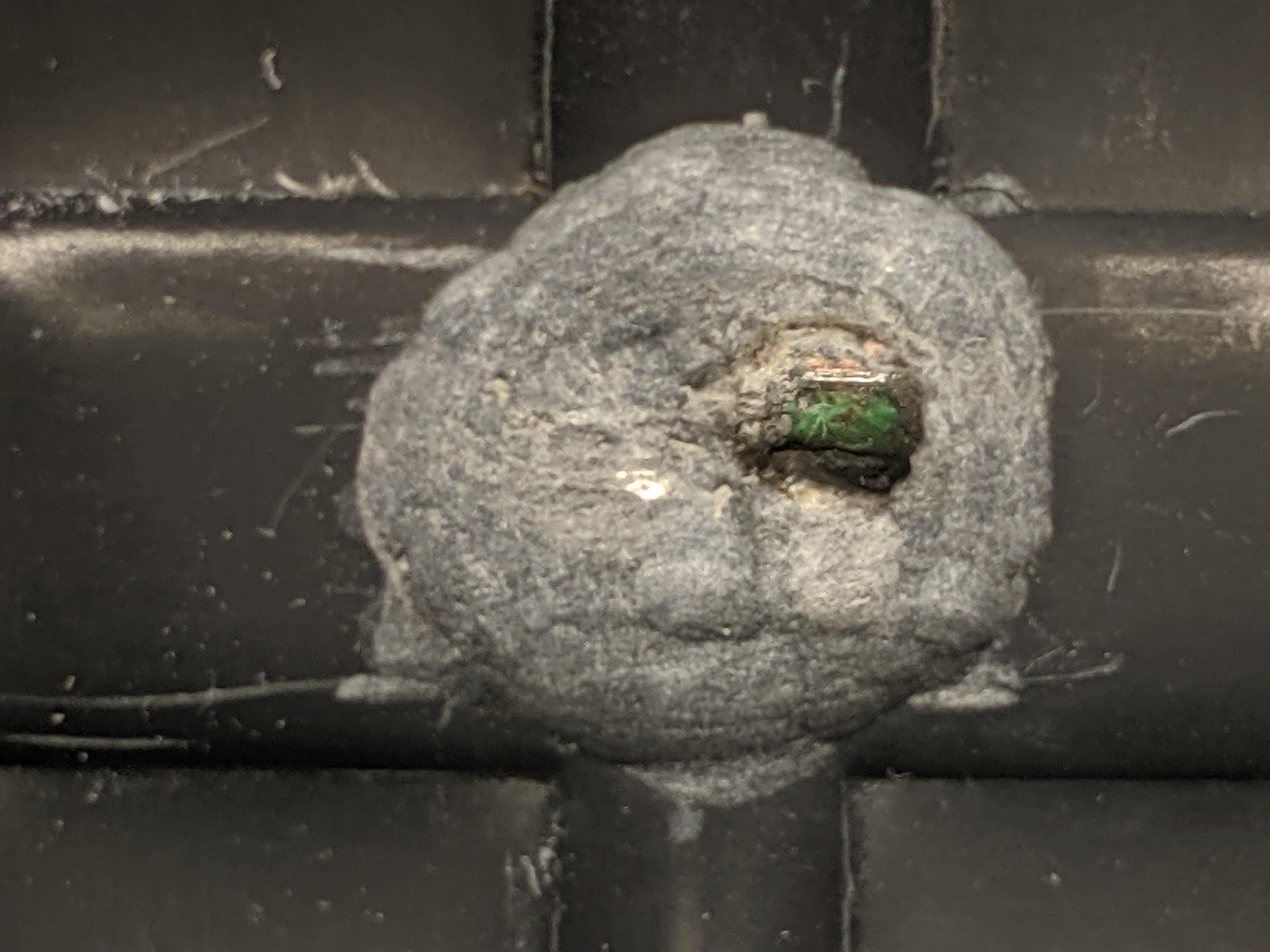 I've been using a Dremel with some very fine grinding bits, a soldering fan to draw anything airborne away, a desk magnifier to help the view, a few pointy probes to tidy things up, and I'm periodically damping the working area with isopropyl alcohol and wiping it clean.

Need to widen the hole out tomorrow so I can see the two capacitors fully, and gauge the extent of any damage.
Post Reply
Load more posts
858 posts