yes there are many cheap clones out there. Only buy from scantool.net to get a real OBDLink LX. ebay is full of counterfeit obdlink devices.
kiev = kenny's innovative electric vehicle

Barbagris wrote:Does anyone know why I do not have any reading in the Ah field?

CanION is updated, the car is a clone (Peugeot) and the OBD-II is an STN1170.

Everything measures perfectly, just does not give me any value for "Ah" 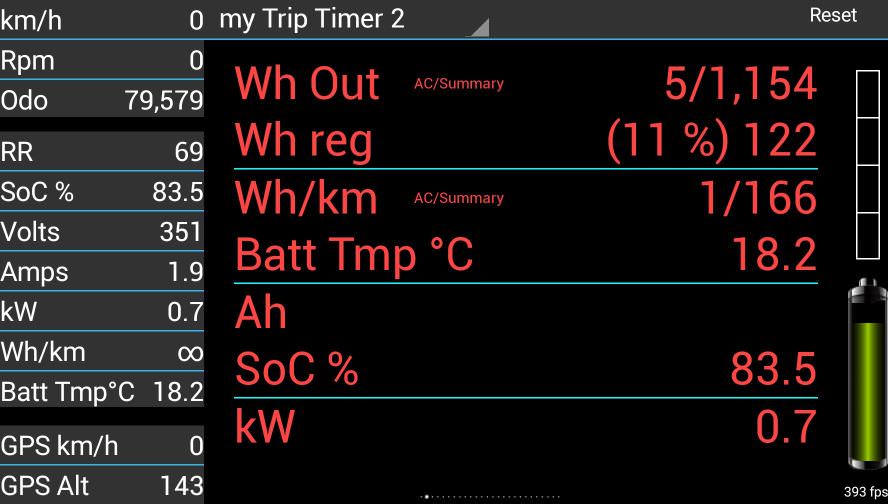 Trying to update the firmware of the STN1170 OBD2 I toasted it.

I have recently noticed that cani0n is now showing the Ah value of our battery modules. This raises few questions.

What is the new value of our Yuasa LEV50 cells ? They are branded as 50Ah. I doubt cani0n would really show 50 in brand new car. But if it would that means I have lost nearly 30% as cani0n shows 35.25Ah for me.

If this is the case, the usable cell capacity brand new will only be about 45Ah, and certainly not 50Ah when the cells are only charged to 4.1v. Evbatmon apparently uses a figure of 46Ah, so for lack of a better figure I have been basing my degradation measurements on 100% SoH = 46Ah.

I've been graphing my Ah (and assumed SoH based on 46Ah=100% SoH) since I've had my 2011 Ion and unlike some other reports in this thread, I've never seen a "rebound" in the figure - it has been a steady linear decline with mileage/age. It's hard to tell if it is related to mileage or calendar age because I do a constant mileage every month, so the only clue would be whether degradation varies between summer and winter. (Due to heater use vs no heater use)

Here are my results so far:

I have a Lexia 3 PSA dealer diagnostic tool that works with the Ion and C-Zero (but not i-Miev) and I have been gathering the Ah figure from that - even the official diagnostic tool provides no guidance on what Ah capacity a new car should have.

I've seen mention in another thread that "older" versions of this car have a "manual BMS re-calibration procedure" that can be performed by the diagnostic tool to get it to properly re-test the capacity of the cells - I have seen what looks like this calibration procedure in the main BMS ECU and how to initiate it in the PSA Diagbox software but I have not yet had the guts to run it. Mainly because it looks like it will take something like 8-12 hours to run the test, and I need to use the car every day...

Next time I have a long weekend and don't think I'll be needing to use the car for a couple of days I might just try it to see if the Ah figure changes!
- Simon

Aerowhatt wrote:Perhaps just give it some time. I know that when I plugged my wife's "i" into the canion app it did not register AH for hours if not a day or more. If memory serves canion was monitoring a charge cycle when it popped up. Looks to me like it's canion that stores the history etc. So from what I saw the first reading took a while to show up.

From what I've read, all data displayed by Canion is provided by passive monitoring/snooping of the CAN bus only - so its likely that the Ah figure is only transmitted on the bus (and thus passively sniffed) very rarely, perhaps only when the BMS has done a recalculation of the Ah figure and is transmitting it to the instrument cluster ECU to update GOM estimates - which is likely to only occur during at the end of a deep discharge followed by a 100% charge.

Hence Canion is probably caching the last known value (or showing nothing if it hasn't seen a figure broadcast yet) until it sees a new update broadcast on the bus, so if you aren't running Canion all the time including during all charge cycles it may "miss" changes to the figure, causing the figure to appear to stay the same for a long time if you only use Canion occasionally.

When I use my PSA diagnostic tool (Diagbox on a Lexia 3) it queries the BMS ECU actively for the figure so I can always get an immediate up to date Ah figure when I go into the standard parameters measurement section on the ECU.

I suspect evbatmon also does an active query rather than the passive monitoring of canion.
- Simon

DBMandrake wrote:Nominal rated cell capacity is 50Ah, but the BMS on the car does not charge the cells to 100% (4.2 volts per cell) but only to 4.1 volts per cell. Depending on what reference you take as gospel, 4.1 volts on a cell chemistry that is 100% charged at 4.2 volts is about 90% charged.

If this is the case, the usable cell capacity brand new will only be about 45Ah, and certainly not 50Ah when the cells are only charged to 4.1v. Evbatmon apparently uses a figure of 46Ah, so for lack of a better figure I have been basing my degradation measurements on 100% SoH = 46Ah.

But I just came across this thread discussing a complete battery pack replacement:

Of interest is the Ah measurement of 45.4Ah for what is most likely a new pack. (I doubt it is refurbished)

That fits very closely with my estimate that only 90% of the cell capacity is usable when charging to 4.1 volts, since 0.9x50 = 45. So it would seem reasonable unless we see other evidence to the contrary that the new 100% SoH usable capacity of these cells is around 45 or 46Ah.

Also interesting is that the faulty pack had done 40k miles, which is what my car has just passed recently, and had an Ah capacity of 38.4 remaining - mine was 38.9Ah at 38,000 miles, and I intend to check soon to see what it is now at 41k miles.

So it looks like the degradation rate on my pack is almost identical to the pack in that thread - but hopefully without any dud cells!

It seams the new battery Ah value should be higher. Here is the Canion screen of my 2015 I-Miev:

One month ago at much lower temperatures:

The temperature reading is not correct as Canion doesn't read cell temp (and cell voltage) at all at 2015 I-miev and later.
Tired of smelly garage - switched to EV in 2012!
Zelenec = Greeny, Treehugger, Ecofan
www.mojev.si

Interesting, I wonder if there is a difference between the older LEV50 cells in my car and the LEV50N cells use after mid 2012 ?

Perhaps 46Ah is the correct figure to use for a "new" battery then. It can't be 50Ah as the cells are only charged to 4.1 volts, so using 50Ah as the starting figure would make it seem as if even brand new cars had significant degradation!
- Simon

Zelenec wrote:...
The temperature reading is not correct as Canion doesn't read cell temp (and cell voltage) at all at 2015 I-miev and later.

Is this really true? It is the first i have heard of Canion not working for later models, and would indicate that Mitsu changed the CAN PIDS for these measurements. Have Martin and Xavier been made aware of this?
kiev = kenny's innovative electric vehicle

kiev wrote:Is this really true? It is the first i have heard of Canion not working for later models, and would indicate that Mitsu changed the CAN PIDS for these measurements. Have Martin and Xavier been made aware of this?

I have a 2016 (USA), and CanIon doesn't provide complete information like it does for a 2012 model that I checked. EvBatMon also misbhaves on my car, but worked fine on the older model. I e-mailed Martin, and he responded with: "i got response from other i-MiEV-owners missing Batt Status & Batt Temp infos. I also checked one special car with canion in diagnostic-mode if missing data are moved to other PIDs. But these data are not available anymore on just listening cars can-bus at newer vehicles (Mj. 2016+ ?). I’m sorry. Maybe it’s feature on newer cars now and it’s possible to activate this via garage-tool from Mitsubishi? Please ask your garage therefore and let me know their answer."

What's weird is that EVBatMon does seem to show cell voltages and Ah, but the values jump around like crazy. I suspect that the app is mixing up the data fields or something.
2016 i-Miev ES, Blue
2016 i-Miev ES, White

I WAS WRONG! What I was seeing was the stored Ah reading from previously using the OBDLink. No wonder my Ah reading had not changed for a year!

I discovered this when I tried CaniOn on the other i-MiEV (with OBDLink) and then put it back into my car (STN1170) and the Ah reading was the same as the other i-MiEVs...