Don, no reason both packs can't be charged together with the on-board charger. It'll take longer, but should work just fine as the aux. pack's BMS is present for the most part.
"Bear" - 2012 Diamond White Pearl ES with QC
"Koorz" - 2012 Cool Silver Metallic ES with QC
"Photon" - 2017 Bolt EV LT in Orange with QC
Solar-powered since 10/10/2013

I wonder how it would work. If you have both packs connected during charge. Doesnt the bms taper the charge current as the battery get to full ? how would that work with two packs if the charge state of each one is different ? Maybe the fuller pack would charge the less full one and things would equalize out but i would monitor that closely during charge.

I would worry that if the external pack hit the high voltage limit on the cells and could not control the charger to tell it to taper the charge then the charge current might push the cells over 4.1 volts. Perhaps this would not happen because the packs would equalize but If not it would be a bad situation.

What do you think ?

The only way that cells in the external pack would go over 4.1 volts is if the external pack is mis-balanced, which would be fixed by the BMU over the longer term. The external pack sees the same voltage as the main pack, so one pack wouldn't be overcharged when they're connected to the same charger. It looks like both packs are balanced, and since both still have functioning BMUs, they should stay balanced. Even still, the cells have headroom and can go to 4.2 volts.

With the relatively tiny size of the on-board charger especially across two packs, the two packs won't become mis-balanced, but if they should, they will auto-equalize. This project isn't much different than how Tesla and Nissan battery packs are constructed with multiple cells in parallel (except they are paralleled at the cell level and this is paralleled at the pack level). Since they are the same size, voltage, and chemistry, the two packs' median voltage will result in the SoC of each pack being very close to each other if not the same. Being that the external pack is connected automatically when the main pack is connected, there shouldn't be an instance when the two packs become severely out of balance with each other unless the external contactor fails to engage or the fuse blows. At this point, the main pack must be brought back to the voltage of the external pack before they are re-connected.

Dani, it may be possible to connect an OBDLink to the external pack's CAN lines and have two instances of CaniOn running at the same time. One monitors the car and the original pack and the other watches the external pack.
"Bear" - 2012 Diamond White Pearl ES with QC
"Koorz" - 2012 Cool Silver Metallic ES with QC
"Photon" - 2017 Bolt EV LT in Orange with QC
Solar-powered since 10/10/2013

So I had another look at the online wiring diagrams.

In the section:MAIN BATTERY MANAGEMENT SYSTEM

The first diagram shows the current sensors in the battery wired to the BMU.

There are 4 wires RED GREEN WHITE and BLue on pins 31,32,33,42 of one of the yellow BMU connectors. I guess these were not connected in your battery external battery. I believe there are 2 current sensors.

In any case you can also measure the voltage on these pins in the operational car and then play with it to figure it out if you have not already.

I wonder what happened almost 2 years ago. Any progress on the project?
Tired of smelly garage - switched to EV in 2012!
Zelenec = Greeny, Treehugger, Ecofan
www.mojev.si

I took the pack out of my imiev (with help from friends).

kiev wrote:Were the buss bars painted or coated with something--they appear white in the pictures and look like the surface has cracked in some of the bends?

We found ours coated in a grey rubber.

kiev wrote:In the third picture of the previous post there is a contactor with red terminal lugs going to the adjacent buss bar--i'm thinking this is the pre-charge resistor connection from the pre-charge contactor to the B+ feed from the pack. Could you measure the value of that resistor?

I can't measure ours - it was the faulty part we removed the pack to replace.It's labelled 240KAG 40W "JRH", but 240kΩ on 360V is nowhere near 40W. The part was open circuit so we couldn't measure it's value.

We broke it apart to see what was inside, found burnt wire coil, and found it was made up of two coils in series. Measuring ~90% of one coil we found 9Ω, extrapolating to the full length of both coils it's around 20Ω. 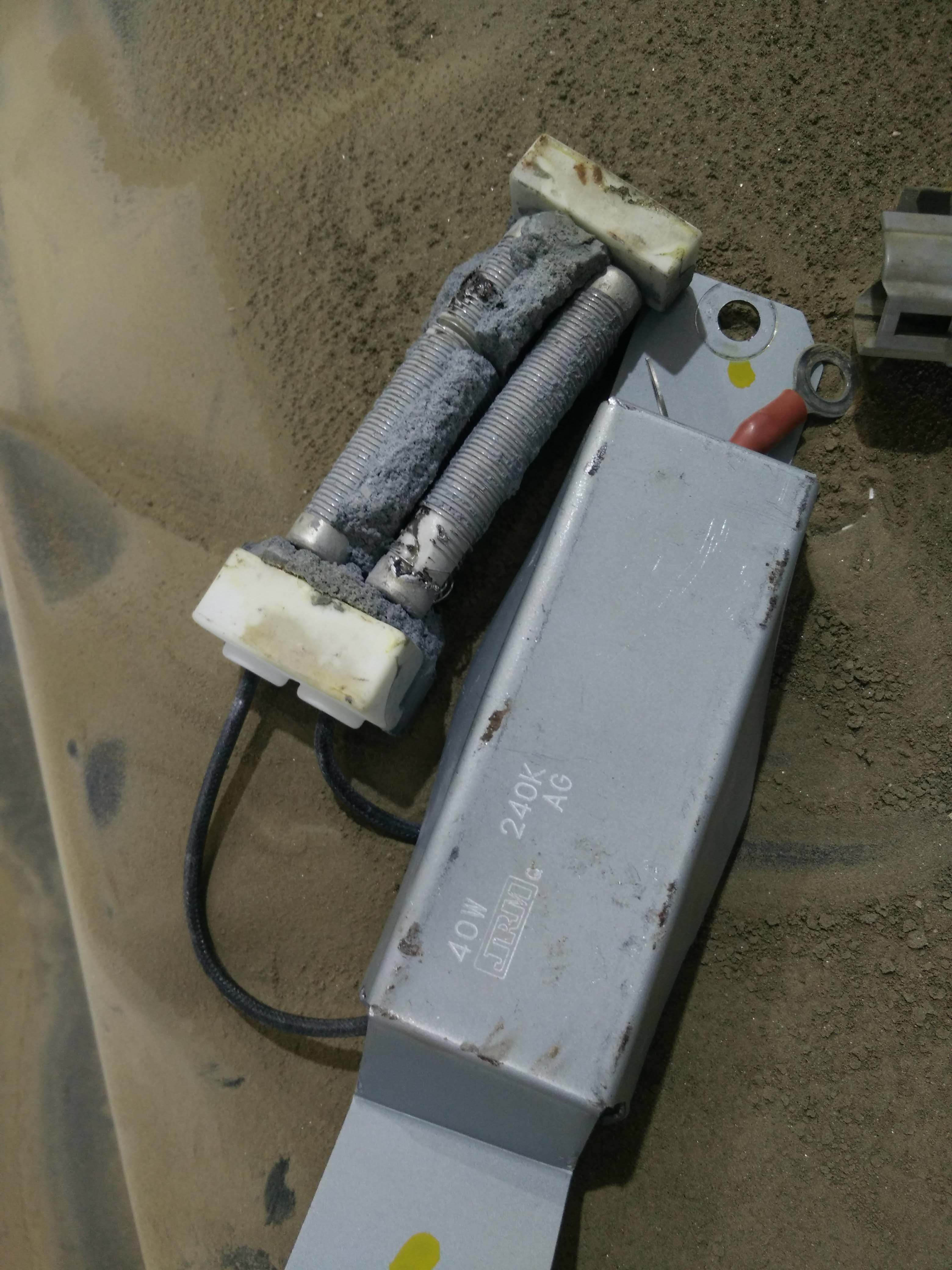 Great job on getting to the resistor, and it looks like your hunch was right that it was damaged.

i posted a link to some datasheets on your thread about the resistor, i think the value is 24. , the "K" is an indicator that it is a 10% tolerance part.


[edit] posted some scope traces capturing the precharge current, and some calculations of resistor power load over there also.

The resistor has to dissipate the energy stored in the capacitors over the precharge timeframe.
Last edited by kiev on Tue Dec 04, 2018 8:31 am, edited 4 times in total.
kiev = kenny's innovative electric vehicle

If K is the tolerance I would have thought that would make the value 240 ohms not 24 ?

He did mention that one side measured 9 Ohms for part of the undamaged length and estimated two in series would be about 20 Ohms. The gauge of the wire and number of turns seems consistent with the measurement.
Last edited by kiev on Tue Dec 04, 2018 8:32 am, edited 2 times in total.
kiev = kenny's innovative electric vehicle

kiev wrote:He did mention that one side measured 9 Ohms for part of the undamaged length and estimated two in series would be about 20 Ohms. The gauge of the wire and number of turns seems consistent with the measurement.

Yes I saw that part of the resistor measured 9 ohms, but I'm not sure I would automatically assume it was "undamaged". There could potentially have been shorted turns in that half which caused the rest of the resistor overheat as the "normal" high resistance part would take the brunt of the dissipation.

Also 240 is ambiguous - it could be a two prefix + multiplier code for 24 ohms, but its more common for low value large power resistors to use a full value with the tolerance letter in place of the decimal point, which would make it 240 ohms.

If the point of it is to pre-charge the capacitors, 5400 watts for 60ms seems awfully quick not just for stress on the resistor but for the capacitors! 540 watts for 0.6 seconds seems much more reasonable for a "soft start" circuit, especially when you factor in contactor switching times. Most power supply soft start circuits have a charge time of approx one second.

It may well be 24 ohms after all, but if it is, I wonder if it's a part just waiting to fail due to excessive inrush current though a device that should be avoiding just such an inrush...

it really would be great if someone with a wrecked pack could measure this resistor to be sure, but I know that's unlikely to happen.
- Simon