I have som interesting results that I want to share on the forum.

It was just after the test in October this year when the battery suddenly was empty (turtle displayed and car stopped) with still one bar left.
It seems like the CPU was fooled into believing there were more capacity in the battery than there actually were.
I also measured battery voltage to be just over 3V (I think 3,050) one day with SoC around 10% if I remember right.

I complained and the dealer performed a new set of tests December 1st.
He found that the battery capacity increased by 15%! during the service and was quite happy!
This is clearly wrong, but what can I do when the dealer says "Battery is OK".

That is interesting data.

In the service manual for Main Battery On Vehicle there are 2 procedures related to capacity: measurement, and check

Did the dealer perform the automatic capacity measurement at each of these visits (which takes about 6 to 10 hours , or did he just read the BMU data item #23 to check the capacity?

Yes the reported AH capacity is still something we don't understand. How where and why it reports the numbers.

To know the true capacity of your car I feel the only 100% way is to test the weakest cell out of the car.

I could understand the capacity growing and shrinking a little from winter to summer (if test were performed at different times of the year) Though not to much.

Last time I checked my car the ECU's stored capacity reported 38.6AH. Though I have notice no range drop from when the car was brand new. Some say a new Imiev should report 48ah new though I don't believe this as most Imiev's tested with less than 5000km , first few months of ownership report low 40's.....like 20% less than the reported 48ah new car in just a few thousand km driving I don't think so.

So I give up I cant make any sense of this number.

The trouble is if the car thinks it has less capacity than the cells realy do then you get a false low usable range. (Turtle with cells still very strong and to much reserve capacity) If tit gets it wrong in the other direction then you get the turtle popping up with one bar on the dash or more catching you out.

Having never been able to get the Ah rating of either battery pack, I tried to do a Wh capacity calculation with SoC.

My friend has a Focus Electric that he has modified, and has a nifty feature showing energy to empty. Unfortunately, I don't think the i-MiEV broadcasts that info on the CANBus unless it is requested by the MUT-3.
"Bear" - 2012 Diamond White Pearl ES with QC
"Koorz" - 2012 Cool Silver Metallic ES with QC
"Photon" - 2017 Bolt EV LT in Orange with QC
Solar-powered since 10/10/2013

BlueLightning's chart is a very useful tool. My bad cell #47 is only reading 3.95 when all the rest are at 4.1, and the gauge only goes to 10-11 bars. The mut clone device and canion both report SOC at 60 to 66%. So there are several ways to view the issue.

i hope to get the dealer service to run the cell smoothing function using MUT on december 11, but they didn't seem too open to my suggestion. They want to drain the pack, then recharge, then drain again, then figure out what to do...
kiev = kenny's innovative electric vehicle

From my trips I understood that I have 14kwh available from 100% to 0% SOC in Canion. I made a trip from 100% to 9% and extrapolated the Wh out (minus Wh reg) to obtain this value. Furthermore, when the average consuption is 140 Wh/km, I see that I consume 1% SOC per each km, leading also to the 14kwh value. I believe this corresponds to the usable value in a new car with the 16kWh baterry (not sure about the 14.5kWh triplets). 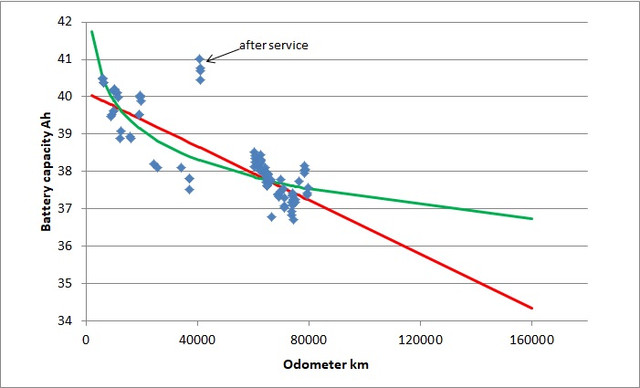 In an earlier post BlueLightning suggested measuring the fully charged battery capacity by comparing the change in kWh with the change in SoC while charging. I have done something similar using measurements of amps to the battery and the SoC collected from my CZero now and then over the last 4 years. This covers mileage from 6000 km to almost 80000 km. Up to 50,000km the data was collected with Canion at about 1 second intervals. After 50,000km the data was collected with OBDZero at about 4 second intervals. I first divided the data into measurement sets without gaps. This resulted in about 400 measurement sets most of which were quite short. I then used this formula to compute Ah for each timestep:
Ah = (A0 +A1)*dH/2
Where A0 is the amps measured in the previous timestep and A1 is the amps measurement in the present timestep. dH is the timestep (either 1 sec. or 4 sec.) in hours.
For each continuous measurement set I added up the Ah values and the changes in SoC. I then computed the battery capacity using this formula:
CapAh = 100*Sum(Ah)/Sum(dSoC)
Where Sum(Ah) is the accumulated amp-hours to the battery, dSoC is a 0.5% change in SoC and Sum(dSoC) is the total change in SoC in each continuous measurement set.
Most of the original measurement sets were too short to give meaningful results. By setting a minimum of 20% change in SoC for a useful set, 100 sets remained. The capacities computed from these sets are shown as points in the graph above.
The loss of capacity over time is easy to see but there are ups and down along the way. The most obvious of these are the capacity measurements between 40 and 41 Ah at a bit more than 40,000 km. As noted in the graph these measurements were record shortly after the car was serviced at 40,000 km. I believe that as part of the service the car’s battery capacity estimate was reset to 41 Ah or higher. This agrees with bobakka’s observation that the battery capacity seemed to be too large when their car was serviced. This also shows that in reality I’m computing the car’s estimate of the capacity not the true battery capacity. The less marked ups and downs in the capacity may be due to temperature changes and of course errors in the measurements.
The red and green lines in the graph are two models fitted to the data. The green line is:
CapAh = 50.4 - 1.14*ln(km)
And the red line is:
CapAh =40.11 - 0.000036*km
The green natural log line fits the data a bit better than the red linear model. However neither fit is good and I need more data in other to be certain of which model gives the best description of aging. There are other reasons to believe that a natural log model best describes battery aging so with a bit of luck I will have a useable battery for some years to come.
Post Reply
Load more posts
66 posts