Howdy, What do yall think about creating a technical forum dedicated to this subject or something related to the Service aspect? There are hardware related forums and driving, but nothing on service.

While it may not seem necessary at this time, it will become a vital and important resource as cars drop off of warranty and begin to throw trouble codes.

There are a lot of unknowns related to the use of the mut, e.g. Is a MUT session required if the BMS control unit is disconnected from the wiring harness, or only if it is removed for inspection or replacement? [does anyone happen to know the answer to this?]

edit 6/24/2017:
i bought an iCarsoft i909 scanner, which is a clone of the MUT without the PC interface for reading the service manual, etc. It reads all the data from the control modules. It should be a good troubleshooting tool. Buy it now auction for $120 seemed like a good deal.
Last edited by kiev on Sat Jun 24, 2017 10:47 am, edited 1 time in total.
kiev = kenny's innovative electric vehicle

kiev, thank you for starting this thread.

I agree. Getting our hands on the MUT 3 tool and being able to properly diagnose the car may save us a lot of money and dealer visits in the future, as many of our new vehicle warranties expire.

Bonsoir
I made a temporary exchange with somebody in england: Mut3 vs the tool from peugeot.

It runs only on XP and only with a really old release of IE.
It is difficult (not user friendly) to choose the car's model.
It is very difficult to navigate from menu to item...

ps: maybe I should contact this nice english guy and get back my interface (made at the time of web 0.8)
pps: about this kind of service tool, the one from toyota/lexus is really user friendly..... (but of course not usable for the imiev)

priusfan wrote:I made a temporary exchange with somebody in england: Mut3 vs the tool from peugeot...

Today, while picking up Mitsi (my original i-MiEV) that was in the shop for the latest recall and the airbag light (they couldn't find anything wrong so just reset it), I allowed as Mitti also had the airbag light, but that I had caused it by removing the seat. The manager was very accommodating and called the tech to come out and reset the light. The 'tools' consisted of a very rugged-looking PC, a small interface box, and the OBDII cable that he carried out to the car. It took him about a minute to do the reset (most of the time spent studying the screen and waiting...), and I had a brief chat with him. He volunteered that he couldn't get the software to run on a 'normal' PC (and of course I am clueless as to which PC operating systems are in vogue so I didn't know enough to probe that), but that the unit he has there works just fine. The tech then probed me as to how I like the i-MiEV as he was quite interested in it, so I gave him the salespitch.

Afterwards, the manager allowed as he wouldn't charge me for the light resets this time but that it is no longer under warranty. He said he wasn't worried and said, with a smile on his face, that eventually I would come to them for something they could really charge me for.

I probed him to see if there was any way around the MUT-3 for such a simple reset and he said "no", and I followed up by asking him if he had an MUT-3 I could buy - he laughed at first and allowed as I'd have to go to their tech school first, but when he realized I was serious he allowed as they had recently disposed of an extra MUT-3 they had had.

i think Xavier was trying to explain the obsolete pc element to you:

It runs only on XP[windoze xp] and only with a really old release of IE[internet explorer].
It is difficult (not user friendly) to choose the car's model.
It is very difficult to navigate from menu to item...
kiev = kenny's innovative electric vehicle

kiev wrote:i think Xavier was trying to explain the obsolete pc element to you...

I realize that, but Xavier's message came after I had talked with the Mitsu tech.

Bonjour,
I think you have no choice but use the VCI (Vehicle Communication Interface) and the software from Mitsu....

On the following picture:
The VCI is connected via USB on the left computer (HP 15 inches screen).
The "computer" on the right is just for fun and for the scale... 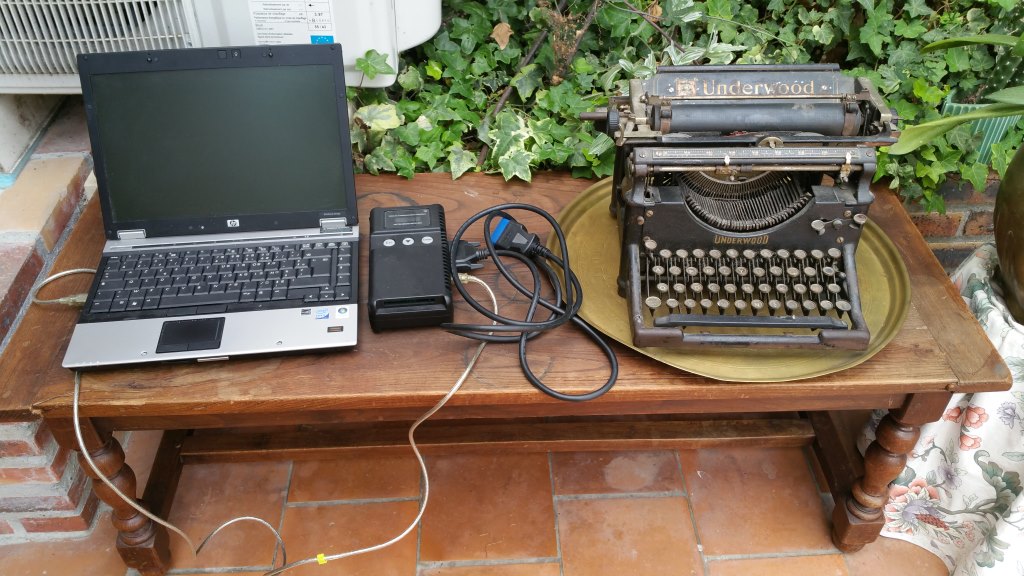 @kiev: I have no idea about the Can Numbers, but after monitoring some exchanges using MUT3, I can say that the dialog with the car is not standard compared with a standard car.
Conclusion: it is impossible to use torque with specific parameters for this car.
Idem with Outlander PHEV to get infos on the HV part (and nothing is common with iMiev regarding BMU & CMU, so canion is not usable)

Xavier, thank your for your explanation and photo, including the ancient word-processing "computer"