Yes I agree . . . it's just that brainwashing must be undone in steps. Our local connection fee was just approved for a hike from $5 a month to $7. The utility had asked for $12 per month. This was after a $6 per installed kW of solar equipment per month of was turned down by the PRC. Heck they figured it worked in Arizona so why not try it here. Overall (complicated of course) residential payers will see an average of 9% increase in their bill (they had asked for 14.4%

Like so many other places, it's capitalized cost recovery on assets contracted for that aren't needed or aren't needed enough to cover their own cost. The ongoing rate fights cost rate payers millions (we pay both sides of the litigation costs) Yep both sides . . . think about it. So less than stellar corporate decisions drive the whole mess and it goes on into the foreseeable future. So how does it get halted. Well you have to get "corporate" out of the whole thing (it's the only way folks). The corporate capitalist mindset is that anything but growth, growth, growth is a failure! This notion has to be eradicated from modern culture in general too. I mean really how is constant growth the only success in a finite system

?? Anyway, I'm old enough to remember when my electric utility, Water utility, etc. was owned by the taxpayers. Not a perfect system, but we had a voice without a dozen lawyers being payed handsomely to represent us. There was no profit motive built into decision making. None of the bill we payed went to profit either. And a number of other more subtle advantages. If I had a dollar for every time I have heard someone state that government can't do anything right, I would be rich. And it can't really, but in my experience it can and often does get much closer to right than these growth driven, profit driven corporate entities.

An interesting exercise that I highly recommend. Buy a few shares of stock in your corporate utility company. It gets you on the list to get the shareholders news and reports. Then get a cup of your favorite reading beverage and read the propaganda sent to customers back to back with that sent to shareholders. Bring your sense of humor to the table . . . you are going to need it!

I started a new thread that seems somewhat relevant to this and a few other threads, so please excuse my promoting it.
Optimum EV Charging and Electricity Consumption Time for GHG, TOU
http://myimiev.com/forum/viewtopic.php?f=22&t=3951 <<< COMMENTS HERE

Summary Re-posted:
In order to charge at the cleanest grid time, I have set my EVSE to only charge from 7h to 17h. Besides helping to reduce GHG, this also promotes solar, and will hasten the demise of non-renewables.
Until SCE's TOU supports this and is actually cheaper for me, I'm staying on the standard NEM plan.

By GHG emissions by hour
Optimum between 7 and 17h average 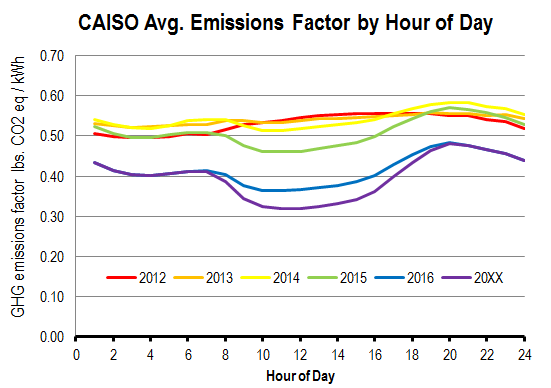